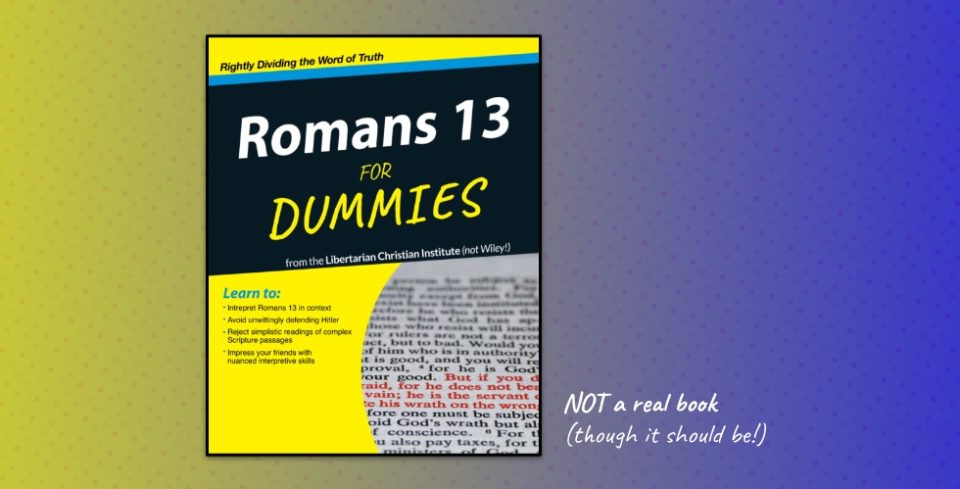 “It is very biblical to enforce the law.” – Sarah Sanders 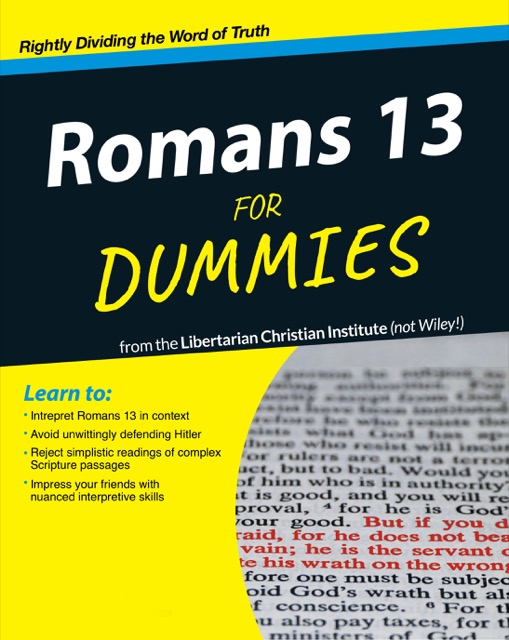 Romans 13 is in the news, and is being abused by the White House to enforce an unjust law. It’s no wonder non-Christians are fed up with Christians using the Bible to justify any political power play. Setting aside the hypocrisy of letting Obama off the hook for his own egregious immigration policies, most of Trump’s critics are right to be troubled by the use of Scripture passages to carte blanche justify their decisions. Libertarian Christians have an opportunity to contribute to the conversation about interpreting Scripture properly and within its context. I believe the Apostle Paul would approve!

So in keeping with our promise to equip you with relevant and timely resources, below are some places you can look to learn more about Romans 13. Sorry for the clickbait title, because Romans 13 isn’t for dummies… it’s not an easy passage to interpret, and takes some effort to understand in context. But it’s worth digging in.

Even more resources (copied from anarchochristian.com)

AnarchoChristian Podcast Episode 18 dives into a portion of David Lipscomb’s Civil Government for keen insight into one of the prominent interpretations for the Christian Anarchist.
https://www.anarchochristian.com/romans-13-and-david-lipscombs-civil-government-ac018/

NT Wright “The New Testament and the ‘State’”: http://theologicalstudies.org.uk/article_state_wright.html

Following from above, here’s more N.T. Wright, focusing just on Romans, so going a bit deeper. And I really like the way it specifically focuses on Romans 13 at the end (right before the short overall conclusion), with six delineated short summary points. Just this portion could be lifted when necessary. You may notice that Wright uses “anarchist” in a way different from most self-identified anarchists, but in the end this is not a big issue. “Paul and Caesar: A New Reading of Romans”
http://ntwrightpage.com/Wright_Paul_Caesar_Romans.htm

Here’s a nice overview of the basic theological landscape and issues, ultimately giving a Mennonite perspective. “Submission to Governing Authorities: A Study of Romans 13:1-7”:
http://www.directionjournal.org/issues/gen/art_849_.html

Preston Sprinkle, focusing a bit more on the violence/war implications and interpretations, but also tackling it all. “Kingdom of God, Politics, and Romans 13”: http://www.patheos.com/blogs/jesuscreed/2012/11/16/evangelicals-militarism-and-romans-13-preston-sprinkle/

Short video of Stanley Hauerwas in the midst of a debate. This could probably be mostly reduced to the idea that Romans 13 must be read in light of the preceding Romans 12, but as Hauerwas knows, the actual hearing of it is sometimes the best argument:
https://www.youtube.com/watch?v=PSw3tL-VkuI

NT Theologian Scot McKnight. You may notice that like Wright in an above piece, he does not use “anarchist” in the same manner as anarchists usually do, but again this isn’t the main issue. “Kingdom of God, Politics, and Romans 13”:
http://www.patheos.com/blogs/jesuscreed/2015/01/28/kingdom-of-god-politics-and-romans-13/

Leonard Reed, “Rendering Unto Caesar: Was Jesus A Socialist?” The full last quarter of the piece focuses on Romans 13. While not a theologian, Reed has thoughtfully engaged here: https://fee.org/media/14934/reed_rendering_unto_caesar.pdf

Chapter 10 of John Howard Yoder’s “Politics of Jesus,” titled “Let Every Soul Be Subject: Romans 13 and the Authority of the State”. Here’s a dropbox link to a pdf of that chapter:
https://www.dropbox.com/s/d67pq5m1q2ko10t/Politics%20of%20Jesus__Yoder_Chapter10.pdf?dl=0

Jacques Ellul, from the book “Anarchy and Christianity” (pp.77-85). PDFs of the book are on the net, but here is the dropbox link to those pages (starts at the bottom of page 77 under the “5. Paul” section):
https://www.dropbox.com/s/qh4hi8wjlorq28g/Paul%20Pages%20from%20jacques-ellul-anarchy-christianity.pdf?dl=0

James Rogers (May 10, 2017), “Weaving Chapter 13 Back into Romans
Another good piece about the context with Romans 12 forming a single related unit, and then the main theme about Christian prohibition on taking vengeance.
https://www.firstthings.com/web-exclusives/2017/05/weaving-chapter-13-back-into-romans

Of course, there are many more articles about Romans 13, and as LCI produces more, you’ll want to hear about it. Sign up for our mailing list here.

Read More »
PrevPrevAnd You Thought You Lived in a Free Society
NextThe United States & North Korea: the Formation of a RelationshipNext