The United States & North Korea: the Formation of a Relationship 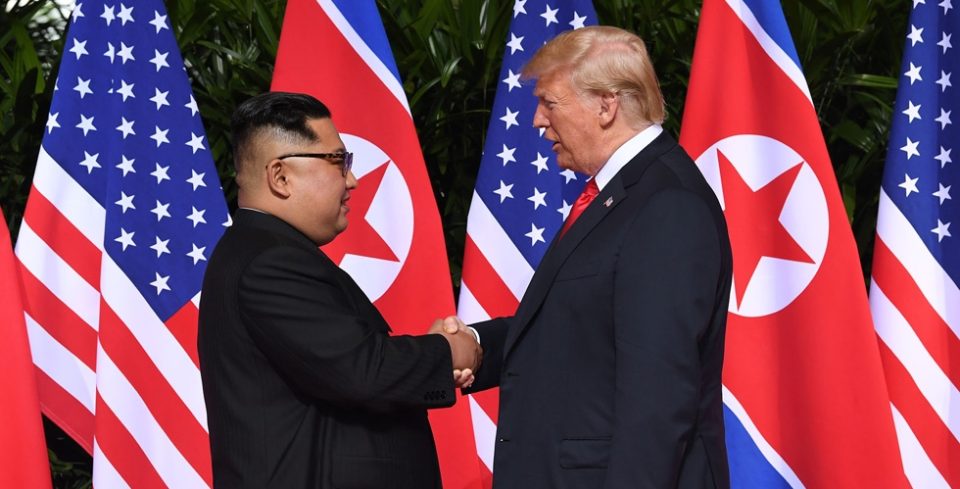 Donald Trump has become the first sitting United States President to meet with a North Korean Leader. Depending on who you read, the summit was a distraction[1], offensive,[2] nearly miraculous,[3] emotional,[4] vague,[5] historic,[6] and if I can add my own, ludicrous. Each characterization seems fitting for specific points throughout the stretch of events, though as a whole it seems indescribable. What exactly just happened – and is happening?

Only a year ago, 22-year-old Otto Wambier died after his release from a North Korean prison. Only seven months ago, the “mentally deranged U.S. dotard” was threating the “short and fat” “Rocketman” with “fire and fury like the world has never seen.” Only two years into his term, Trump has done what candidate Obama only sought to do: meet with enemies “without preconditions.”[7]

What exactly happened? Did anyone ‘win?’

It appears that Kim Jong-Un has been taking Trump’s threats quite seriously. According to one source, Trump’s “fire and fury” talk motivated Kim to send a delegation to the 2018 Olympic Winter Games in South Korea – an olive branch of sorts.[8]

Kim showed the world that he possesses nuclear weapons. He’s aware of the discrepancy in the arsenals between North Korea and the United States; he didn’t need Trumps reminder that ours “are so massive and powerful.”[9] Nevertheless, he sought to complete the mission set out by his grandfather and father. With an arsenal of its own, North Korea can assume success in its isolationist utopic dream. It can portray itself as completely self-sufficient, and that includes the ability for self-defense.

North Korea can now crack open its door to the international community on its own terms. It has ‘proven’ to the world (or rather, to its own people) that it can do just fine with its door locked shut. Kim can now open his door because he wants to. He can accept relief without losing face. He’s doing what he wants to do, not what he’s forced to do. Kim can begin to participate in international communications for the sake of North Korea’s economic growth without changing the social dynamics within North Korea (because he can always shut the door if he has to).

As a result of the summit, the United States has entered into a relationship with North Korea. It is informal and symbolic, yet the two have formed a bond in their mutual recognition. The relationship is not necessarily equal, but as with any relationship it influences the identity of those in it. In other words, a relationship between two actors creates a bond through which either individual can influence the other in ways not possible before.

What does this look like in the case of the United States and North Korea? The relationship allows one actor to influence the other, for only a bilateral relationship makes those involved vulnerable and culpable to the other. The United Nations, for example, is a union between many nations, but it is not a relationship between nations because the union places no vulnerably upon those involved, nor does the union itself make those involved culpable for the actions of the union. If the United Nations were ever to disintegrate, it would not ipso facto leave the individual members vulnerable because of their participation in the failed union, nor would they face culpability for any failings or wrongdoings of the union. The United Nations does not have a bilateral bond between each actor because it is but a name formed from many bonds between many actors, which consequently blurs the bonds into a web and obscures the influences signaled between those in a relationship.

The summit, as the formation of a bond between the two countries, is a boon for North Korea. The legitimacy and promotion it has received on the world stage is imperative for the potential growth of its economy. Of course, North Korea does submit itself to the vulnerability and culpability that comes along with any relationship. It has legitimized the threats leveled against it by the United States. Were North Korea to renege on its expressed desires for peaceful stability, retaliation from the United States may be found more acceptable by the world community. Though overall, North Korea has won quite a bit from the summit; seeing as how it entered the relationship as the smaller of the two parties, it was positioned for a greater lift.

What needs to be reflected upon are the ways that the United States becomes vulnerable and open to culpability from its new bond with North Korea. If the relationship ultimately fails, the United States risks losing legitimacy (and facing economic repercussions) from what could be seen as its willingness to submit to empty promises by an actor known to make empty promises. The situation also enters a moral realm. Let us assume all is successful. North Korea denuclearizes the peninsula and the United States is affirmed in its self-assumed role as world protector. The relationship does not disappear because it is continually renewed in the recognition of the North Korean denuclearization process. At such a point, the problem of culpability risks plaguing the United States.

Assuming that North Korea denuclearizes, let us assume it also continues on its path of human rights violations. They continue to run their prison camps[10] and continue their practices of arbitrary arrests, rape and torture of prisoners,[11] and extrajudicial killings.[12] Let us also assume that through the lifespan of this relationship the United States restricts its influence to the problem of nuclear arms. From the eyes of the world, could the United States become culpable in North Korea’s human rights violations? If the United States does not make use of its freely-formed relationship with North Korea to attempt to stop its immoral actions, does the United States become complicit in those acts? While the United States’ reason for ensuring denuclearization is to prevent loss of life, is that intent denigrated by turning a blind eye to the current loss of life at the hands of that same actor?

Did you like The United States & North Korea: the Formation of a Relationship?
You may also like These Posts: