Concerned with Libertarianism? You Shouldn’t Be 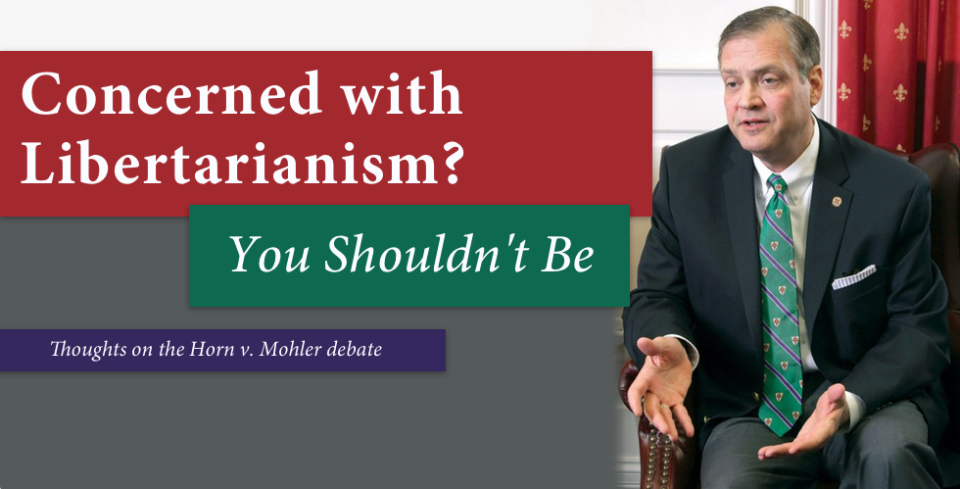 Southern Baptist Seminary President Al Mohler misunderstands libertarianism. Attempts to correct his perception have been unsuccessful thus far. Maybe in the near future that will change, but in the meantime let us address his publicly declared, yet ill-contrived concerns about libertarians, since he is convinced those concerns are real.

The points I address below are based solely on what I heard during his debate on March 5 with Dr. Norman Horn on Up For Debate, a Moody Radio show hosted by Julie Roys. Mohler has spoken negatively about libertarians before this debate, and he tweeted a snarky remark afterward. During the debate he seemed to insist upon his own definition of libertarianism, despite Horn proffering a more circumspect and nuanced definition.

So what are Mohler’s concerns about libertarians and the libertarian movement?

1. Libertarianism is an all-encompassing worldview

Perhaps it would help Mohler to consider the fact that systematic theology has aided the Church in expositing the many aspects of Christian faith by focusing on each area and developing a specific theology. There’s a theology of sin, a theology of salvation, a theology of the Holy Spirit. While most Christians who are studied in these theologies tend to aim for cohesion of some sort, each respective theological realm has its own limitations and is not expected to carry the weight of one’s entire theology. We could say that libertarianism is one formulation among many conceivable “political theologies” in contrast to alternatives such as conservativism and progressivism.

If Christians are to be libertarians, somehow that libertarianism must not conflict with the broader worldview that Christians hold. Whatever it is we believe about life, the universe, and everything, Christian libertarianism attempts to answer the question, “How should Christian faith be applied politically?”

But if libertarians do not all operate from the same worldview, what do we make of the diversity among libertarians within libertarianism itself?

2. Libertarians don’t agree with each other

Mohler thinks he can discredit libertarians because its adherents do not hold to a unified viewpoint or set of policy prescriptions. Mohler believes it is a liability (for libertarians) that it has no cohesive set of doctrines, and an advantage (for conservatives like him) because this means libertarianism will never really “get off the ground” as a movement.

This is puzzling because Mohler is a Protestant, and the Roman Catholic Church has critiqued Protestantism for half a millennium for this very reason. Protestants have their doctrine of sola scriptura, but look at where it has got them! They all have their own little views that they can’t even agree on! While Mohler could reply that Protestantism has thrived despite this critique, that’s precisely the reason he should acknowledge that such diversity is a feature (for both Protestants and libertarianism) and not a bug. (Not to mention that his criticism would equally apply to conservatives as well.)

In the same way the Kingdom of God does not advance because one denomination captures the attention of the surrounding culture, the liberty movement does not depend upon the dominance of a particular party or the popularity of influential politicians to be successful. The ecumenical nature of libertarianism as a whole means there is room to work toward a common goal without needing to agree completely in all possible scenarios.

Conclusion: Mohler’s very own religious heritage demonstrates that diversity does not inhibit alliances with others who share common values.

But for Mohler, there is a deal breaker when it comes to political alliances: abortion.

3. Libertarians have an “unclear position” on abortion

Horn defended the Christian view that abortion is aggression and therefore should be illegal. Mohler was happy for the agreement with Horn, but he had a different problem. He does not believe that Christians should unite with a movement that is not definitively pro-life on abortion (I add “on abortion” because conservatives tend to overemphasize a pro-life position for the unborn and not the already-born children who are murdered by wars started by conservative Presidents). Here is Mohler in his own words:

Notice Mohler’s resistance to ambiguity and clutching to certainty. This issue is, for Mohler, too important for there to be many opinions within a single movement. I get that. But where is the absolutely certain and unwavering position of conservatives that children in the Middle East should not be aggressed upon because there are morally grave consequences? It is a minority view that perhaps Mohler holds to, but he cannot criticize pro-life libertarians for their philosophical alliance with pro-choice libertarians while at the same time ignoring his own alliance with a conservative movement which is not “absolutely certain” on the issue of killing children in other countries.

Conclusion: If Mohler wants a political movement to have an absolutely clear position on matters of grave consequence, he will have to start his own.

4. Libertarianism attracts those who want no moral restraints

But Mohler has another concern: many are flocking to libertarianism because they are searching  for justification for doing what is right in their own eyes. That is, they would like fewer moral restraints so they can indulge their hedonism.

Humans tend to be distrustful of those whose motives seem misguided or ill-intentioned. But unlike libertarians, who give the ‘stink eye’ to those clamoring for power, Mohler sees those who hunger for more liberty as heading toward danger of a different sort. Individuals who yearn for freedom from moral restraint reek of hedonism to Mohler, and therefore Christians should not be interested in aligning themselves with such a movement.

Mohler’s cultural assessment that people are excessively pursuing unrestrained moral autonomy could be accurate, but it is immaterial to the debate over Christianity and libertarianism. Every political movement attracts followers whose motives are less than virtuous. While Mohler is concerned that a libertarian ethos enables hedonism, he seems wholly unconcerned that a government with the authority to impose his own moral preferences on others is also the enabler of a different threat to society’s well-being: socialism.

If the motives for why a political position is attractive is evidence the political movement is wrong, would Mohler reject the doctrine of complementarianism because it enables and attracts men who abuse their wives or other women who work for them? Would he reject law enforcement since some people seek to become cops because it feeds their aggressive impulses? Of course not!

While some people might embrace libertarianism with a “Don’t tread on me” ethos, libertarian Christians proclaim, “Don’t tread on anyone!” And this is not a minority position within the libertarian movement. Libertarians are known for being in favor of the rights of others, even those with whom we do not agree.

A parallel might help a Baptist like Mohler. Individual soul liberty is a Baptist distinctive, which states that individuals must make up their own minds about matters of faith. This has its limits, but it is why some Baptists choose to not drink alcohol while simultaneously acknowledging the freedom for others to choose otherwise. Some Christians work on Sundays, others do not. While some churches split over issues like these, generally speaking, Baptists are in favor of extending charity to those who have personally chosen differently. On a much larger scale, this is what libertarians do for society. And just like there are limits to the liberties of Christian behavior, so also there are limits to the liberties of human behavior within society.

Conclusion: Mohler’s concern over the attractiveness of libertarianism is both irrelevant and insufficient to denounce its validity.

In sum, Mohler’s concerns are either tangential to the validity of libertarianism itself or straw men to excuse himself from truly engaging in the central tenets of libertarianism and their strong compatibility with Christianity. During the debate with Horn, a caller called him out on creating a straw man and suggested that he listens to what Horn was actually saying. Mohler’s reply – “What I am saying is coming from prominent libertarians” – essentially revealed his strategy for the debate itself: ignore your opponent’s own position and insist that your own definition is the only one that matters. To reframe the discussion in terms of how you define the terms of the topic makes your opponent’s nuanced and qualified views appear untenable.

As is typical of many conversations that involve disagreements, the end comes too soon. Mohler’s final comment as the ending show music started would have been a good start to another debate. He essentially said that libertarians are concerned with government with respect to the state, but haven’t developed a serious alternative to legitimate institutions that are required for a civilized society. It was a shame that Horn did not get a chance to respond because it is a libertarian perspective that helps us consider what life outside a coercive state could look like if we simply give the idea some “air time.”