Post-Debate Recap and What Should Have Been Said 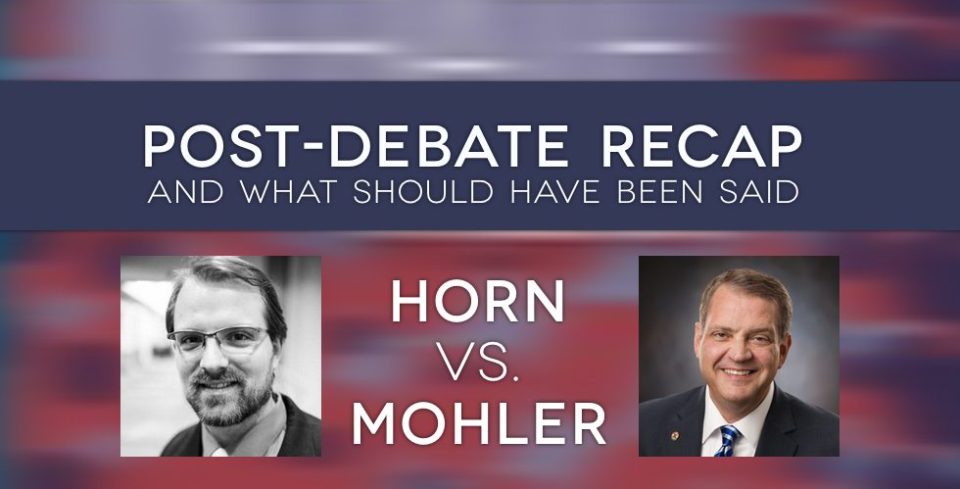 Today I participated in a debate-of-sorts on the Up For Debate radio show. The other discussant was Dr. Al Mohler, president of the Southern Baptist Theological Seminary and well-known evangelical theologian. If you missed the show, click here to listen in. I want to thank publicly Ms. Julie Roys and Dr. Mohler for making it such an excellent radio event.

Overall, I am pretty happy with the results minus the technical difficulties in the first five minutes. But a lot was left unsaid and a lot was left without a response. Dr. Mohler is an honorable man and I applaud his contending for the Gospel through his calling at SBTU. Unfortunately, it seems that despite extending an olive branch to Dr. Mohler to provide him with more context on the topic, he continues his prior position of not really understanding what libertarianism is, misrepresenting what he does know about it, and conflating disparate philosophies like objectivism with the limited scope of libertarian theory.

Over the next few days, you will hear from a number of Christian libertarians with additional comments, critiques, and expansions on the discussion. But first I want to post publicly the talking points I wrote for Julie this week. I don’t think they expected a 600 word essay, but that’s basically what they got. I’ve pasted it here in total, and any additions I’ve made will be in italics.

(2) Libertarianism is characterized by a particular theory of property rights, namely self-ownership and first-appropriator of external things. Furthermore, because we have a property right in ourselves and things we have appropriated, the invasion of such is a violation of those rights. This coalesces in what we call the “non-aggression principle”, that no man or group of men may aggress – initiate physical violence – against the person or property of anyone else. We recognize this because we value justice, peace, prosperity, cooperation, conflict-avoidance, and civilization. Christian libertarians recognize that these natural law principles are congruent with the Biblical presentation of rights in person and property with respect to other human beings. The non-aggression principle is, in a way, a political corollary of the Golden Rule. Mohler’s troubling tendency is to ignore the wealth of information about what libertarianism is in favor of his pet definitions of Randian Objectivism and some variant of amoral secular humanism. Whenever we discuss liberty with others, we need to be careful to establish concrete terms. I was able to finally make this clear and define the scope of libertarianism as limited and not a comprehensive worldview, but unfortunately Mohler mostly dismissed this definition in favor of his own. This kind of “soft presuppositionalism” is actually a too common tactic used by some Christian debaters and allows for preclusion of other ideas without legitimate consideration given. You wouldn’t like this to be done to you, so don’t do this.

(3) Libertarians recognize that the State is fundamentally founded on the initiation of violence — aggression — against others, and thus we oppose statism. Christian libertarians recognize that the Biblical origin of the State is rebellion against God through passages such as the Tower of Babel and 1 Samuel 8. The Bible consistently presents the State as a violent, enslaving, rebellious, terrorizing institution from Genesis, to Exodus, to the days of the Kings, to the temptations of Jesus, to the Apostles, to Revelation. This has been a major theme of LibertarianChristians.com since the beginning of the site in 2008, and one that I truly hope takes root in the future of Christian thought. I really wish I had been given the opportunity to make this clear. At one point, Dr. Mohler basically said “You libertarians always seem to focus your criticism on the state.” Had I been able to respond, I would have said, “Exactly. That is THE point. The State isn’t just NOT the kingdom of God, it’s the ENEMY of God.”

(4) A consistent understanding of libertarian ideas demonstrates a realistic outlook on man’s sinful nature. James Madison once said that if men were angels no government would be necessary. Christian libertarians take this a step further, saying that it is precisely because men are not angels that the State must be reined in. God does not show favoritism nor does he give special privileges of position – it doesn’t matter if you’re a waitress, President, Soldier, CEO, King, Congressman, or Cop. Everyone is accountable to the moral law in the same way, and you will be held to account by God. Ends don’t justify means. I didn’t think we would get to this point at all, but the caller from Baltimore really helped me out here and I was able to fit it in. This is super-important to the Christian libertarian position, because what the statist Christian is implicitly saying with their support and their justification of the State through Romans 13 is that God has created a special class of men with a different standard of morality. This we cannot abide.

(5) Because the State is characterized by aggression in nearly everything it does, Christian libertarians often target its most heinous activities as the object of our criticisms such as aggressive war, manipulation of the economy through cronyism and regulations, all forms of taxation, the welfare state, prohibitions such as the War on Drugs, free speech, and so on. We were able to talk a bit about foreign policy, but I was surprised that the War on Drugs never came up. Is the critique of the War on Drugs becoming so apparent that it doesn’t warrant as much discussion as it once did? One can hope.

(6) Libertarians think that everyone should be free to do as they will provided they do not infringe upon the rights of others. Christians can recognize the importance of this principle by simply observing history, recognizing how often that other Christians have been prevented from practicing their religion as their conscience requires of them. If we do not afford others the freedom to live their lives as they choose, how can we expect to receive the same freedom to do as we choose? I’m actually rather surprised that religious liberty was not discussed pretty much at all. We got close when talking about gay marriage, but that was it. I think this is really important, though, because it actually goes back to “treat others the way you would have them treat you.” You know, the Golden Rule?

(7) Since the State tends to set itself up in opposition to God, it is no surprise that it takes upon itself aspects of religion. This can be clearly seen in how the American state, for instance, claims power to support, sustain, protect, educate, make healthy, provide jobs, and so on all for its subjects. Moreover, that American Christians reverence such a state that must literally steal and commit violence to sustain itself and its power ought to be extremely theologically suspect. Mohler likes to say that libertarians are idolatrous. He didn’t quite say that this time around, but he definitely implied it. I wanted in turn to gently imply that statism really is far more idol-making than libertarianism. But it’s really hard to get people to see this error. I know because I was there once.

In sum, libertarianism is the only political perspective that fits consistently within the broader Christian worldview.

Any questions? What was your favorite point made? What would you have done differently? I know I’m an imperfect vessel, and I’m always interested in improving. Believe me, I read *every* comment on this site.

Stay tuned for more analysis in the coming days. As always, LCI thanks you for your support.

Did you like Post-Debate Recap and What Should Have Been Said?
You may also like These Posts: