The Sin of Certainty 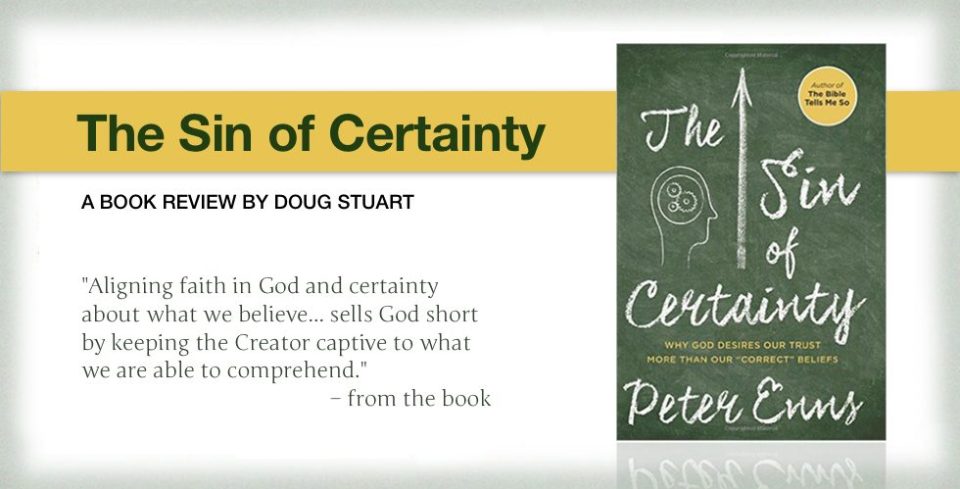 At long last, Peter Enns has finally confessed his sins! It was only a decade ago he was telling tr seminary cohort how right he was and how wrong everyone else was. He even had the gall to say, “If correct theology gets us into heaven, I’m going to be pretty lonely.” At long last, he has published a book that deals with his own sin rather than pointing the finger to others.

Peter Enns is a biblical scholar who has authored previous books that raised the ire of many evangelicals for daring to let the Bible speak for itself instead of making it fit our preconceived notions of how it ought to behave. So when he writes a book and calls it The Sin of Certainty, one might think it is a book about the sins of other people, while coyly demonstrating his own humility and open-mindedness. But this book is not about the sins of others – it is really about his own journey. Enns points his fingers at himself before even implicating others along with him.

So, what is the book about? Who should read it? Enns chronicles his own life experiences and the faith journey he had to take while wrestling with an inherited faith that could not adequately help him cope with his doubts. It is his story of living with tension, working with doubt, and taking risks in faith and real life. It is the story, both intellectually and personally, of Enns learning to cultivate a habit of trust in God, despite life’s circumstances.

This book is a bit different from his other books. While not an academic work, Enns’s “inner scholar” keeps simple and trite answers at bay, ruling out the truly naive or cliché explanations that are nowadays often used as excuses to avoid doing real theology. And while not a true memoir, the book has a personal touch that will resonate with many of his readers. Enns writes with charm and articulates a common human experience, so while he can only tell his story, it is one that will resonate with many who live with doubt, who may even be tempted to despair or give up their faith entirely.

Many Christians uncertain in their faith commonly feel a sense of guilt for failing to “know what they believe.” It’s no surprise: evangelical Christianity has inherited a culture of certainty, so it is easy for a Christian to believe that to doubt is to live in sin by not being certain.

Learning more about our faith surely is a great thing, but can there be a negative on the flip side? Could the over-elevation of certainty be considered a sin? I’ll let Enns explain: “Aligning faith in God and certainty about what we believe and needing to be right in order to maintain a healthy faith—these do not make for a healthy faith in God. In a nutshell, that is the problem. And that is what I mean by the ‘sin of certainty.’ It is a sin because this pattern of thinking sells God short by keeping the Creator captive to what we are able to comprehend…”

To make it clear, Enns explains that the deeper problem is “the unspoken need for our thinking about God to be right in order to have a joyful, freeing, healing, and meaningful faith.” Nowhere in the book does Enns discard right thinking or proper theological inquiry. But when a deep, abiding trust in God is replaced with the feeling of certainty itself, Enns says we are “not actually trusting God at that moment. We are trusting ourselves and disguising it as trust in God.”  It is one thing to be on a quest for truth or even be firm in our beliefs, it is another to elevate certainty itself on a pedestal like an idol.

Enns explains in one chapter that Protestant Christianity got into this mess because of a preoccupation with “getting the Bible right.” While not at all downplaying the importance of biblical studies and knowing what one believes, Enns explains that when the doctrine of sola scriptura goes into a sort of hyperdrive (his metaphor), understanding the Bible perfectly becomes the center of faith. Yet in spite of a doctrine designed to help Christians return to the Bible for truth, it has yet to unify Christianity, and seems to have had the opposite effect. No worries, though. Perhaps the Bible is not, as Enns says, “really set up in the first place to give [this kind] of certainty.” As Enns puts it, “I believe that the Bible does not model a faith that depends on certainty based on the simple fact that the Bible does not provide that kind of certainty. Rather, in all its messy diversity, the Bible models trust in God that does not rest on whether we are able to be clear and certain about what to believe.”

Depending on where you are in your faith, those words could be either relieving or threatening. To those with doubts about their faith, Enns has given a reason to return to the Bible and trust in God despite their concerns about life. To those for whom the Bible is perfectly clear, Enns suggests revisiting your Bible and honestly questioning if it really was as clear as you thought. If you belong in the former group, this book is for you. If you belong in the latter group, this book is also for you – even if you can’t align with him on everything. Either way, you get back to the Scriptures, and that is never a bad thing.

Along the journey Enns shares his favorite Psalms, the ones that call God a liar and blame God for letting the wicked prosper. He also explores what Qohelet (Solomon) must’ve been going through when he wrote Ecclesiastes. And he recounts how a character a Disney movie during an airplane flight unexpectedly disrupted his faith in a positive way.

By the end of the book, Enns has covered a lot of ground. While he surveys topics all over the map in loose navigational fashion, the journey is not concluded by claims of “stronger faith” or some anxiolytic hermeneutic, but by the admission that pure certainty is not what faith is about. Faith is about a deep and abiding trust in God. If there is any knowledge Enns might want to impart, it’s the knowledge that God wants to be present with us.

The Sin of Certainty is published by HarperOne and is due for release on April 5, 2016. I was provided with a review copy by the publisher. I was not required to write a positive review, nor is what is contained here an “official position” of LCI. We encourage vigorous, respectful debate in order to better understand God, the Scriptures, and the world around us.