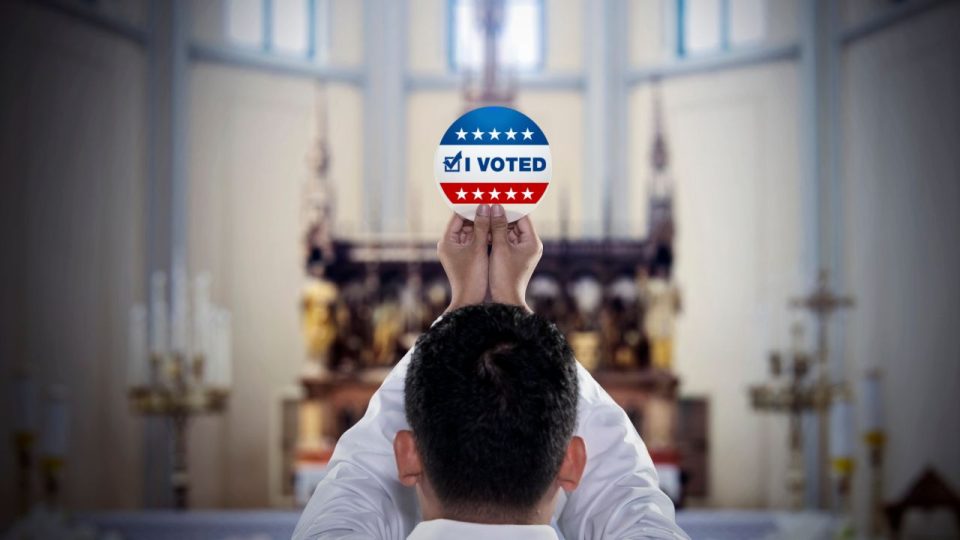 Just recently Americans celebrated one of the high holy days of our faith. Tens of millions of people took part in it and demonstrations occurred in every state. The airways were dominated by talk of it for weeks. It was Election Day. As is the case with all elections, this one was portrayed as the most important election of our lifetimes, with all the noble virtues of our country at risk of falling to the Satanic hordes of the Bad Guys™. The valiant champions of freedom rode forth on their noble barded steeds and fought back the (Blue or Red) savages. As in the case of most elections, too, American Christianity took notice.

Contents show
1 Election Day: Voting is The New Christian Sacrament?
1.1 Voting as Sacrificial
1.2 Sacrificing the Heart of Loving One’s Neighbor
1.3 A False Sacrament: The State is Not Salvific

Daniel K. Williams of Christianity Today referred to “preserving democracy” as “the forgotten Christian cause,” and similarly Dr. Robert Jeffress (senior pastor of a Dallas megachurch) has written that “[a]s ‘salt’ in the world, Christ calls us to influence our culture rather than isolate ourselves from it,” and, “God has given Christians in democratic countries a unique way to ‘salt’ the culture that Christians in other times and places did not have.”

Many churches made comments on the electoral ritual in the Sundays leading up, some – mine, for example – preaching the message that we must be “united in diversity” and that “Jesus would want us to be brought together, Democrat and Republican, like he brought Matthew the Tax-Collector and Simon the Zealot together.” Present in all these different messages is the same idea. Tens of millions of Christians – from Baptist, Methodist, and Catholic churches, from East to West, from progressive and fundamentalist backgrounds – are given the same pregame talk: play the game.

Prominent evangelical outlet GotQuestions? considers it “[taking] that right for granted” that “about 2 of every 5 of self-professed Christians…did not vote” in recent elections. While this might be coherent with what we learned in grade school and notions of “civic duty,” how coherent is it with notions of total submission to Christ? Let us first define what exactly we mean by voting.

Voting is, to be formal, the act of casting an official expression of one’s opinion with regards to a proposed decision, and for the purposes of this discussion we will limit voting to political significance. However true this might be in whatever context, a truer answer is that, in politics, voting is a weapon. It is a cudgel that the 51% wield against the 49%. It is a weapon of mass destruction, in fact, if you consider how the Nazis, for example, were voted in. Since all it takes is 1% of an electorate to break a tie, voting can also be described as 1% of the population disenfranchising 49% and dooming 100%.

Under democracy, bills can be passed affecting just about anything, including your property, meaning democracy produces a destructive free-for-all between ostensible “Haves” and “Have-Nots”; because of this desecration of the institution of property before the sacred masses world-renowned political theorist Hans-Hermann Hoppe has called democracy “a soft variant of communism.” All this taken into consideration, how is a Christian to, in good conscience, cast a vote?

Christian democrats make the assertion that to love one’s neighbor is to fulfill our “civic duty,” but how is it loving our neighbor when we impose ourselves upon them? Christ commanded us to not even demand an apology from those who strike us (Matt. 5:39), but we’re supposed to vote to demand Christian solutions to social issues? Such an idea is inconsistent with the peaceful testimony of scripture and the history of the early Church, which swept over the Roman Empire within two centuries with no swords in their hands but only the word of God on their tongues.

Christians are not commanded to capture institutions, to overwhelm the demonic powers from within, or use the sword given to the State as ordained by God, but to replace those institutions with the Church (but not theocracy), overwhelm the demonic powers from without, and replace the sword with Christ’s mercy. We are not to fall into the Constantinian logic of statism (as John D. Roth suggests in Electing Not to Vote), of being convinced that society would be better off if “our kind of people” ruled and shaped policy in “our kind of way.”

Rather we must fall into the agape logic of the Cross and seek to love our neighbor by serving and not to “lord it over them” (Matt. 20:25). Two likely responses would be, “Well, Romans 13 tells us to respect the government!” and “Our nation is in a terrible place right now, we need to vote for the people and laws that will fix it!” First of all, it is a huge leap in logic to jump from respect to engagement.

You can respect someone without engaging with them, and in fact by not engaging with them you can be respecting them. Plus, Romans 13 does not at all demand unconditional submission to the State, as I showed in a previous article (and as shown elsewhere). Secondly, if “our” country is in danger then that is all the more reason why Christians should engage with the Church even more, rather than the State.

A False Sacrament: The State is Not Salvific

The Church is the body of Christ and His instrument of salvation on the Earth, not the State (Matt. 28:18-20; Gal. 6:1-2; 1 Pet. 2:9-10); for if individuals who “[hear] these words of Mine and [do] them [are] like a wise man who built his house on rock,” (Matt. 7:24) how more secure would such a society be? Most of our problems could be solved in society by not utilizing the State but reigning it in, reducing it by two-thirds (ideally three-thirds).

All of this taken into consideration, what churches in America (and the world) need to be doing is realizing Who truly matters in our faith, Christ, and what He told us to do with our faith, which is to serve. Voting is not an act of service but an act of ruling, of lording over others. Christians need to reorient themselves toward their church, and have their brethren be “standing firm in one spirit, with one mind, by contending side by side for the faith of the gospel,” (Phil. 1:27) which leaves no room for “unity in diversity.”

We have unity in Christ, Who has one singular goal and ideology for us: “But above all pursue His kingdom and righteousness, and all these things will be given to you as well” (Matt. 6:33). There is no king but Christ, and He is not about winning votes, but souls.

Evan Patterson is a student of theology, political theory, and economics in addition to college. He is particularly interested in the relationship between [Christian] faith and liberty and related questions.
All Posts
About Articles on LCI LCI posts articles representing a broad range of views from authors who identify as both Christian and libertarian. Of course, not everyone will agree with every article, and not every article represents an official position from LCI. Please direct any inquiries regarding the specifics of the article to the author.

Did you like Election Day: Voting is The New Christian Sacrament??
You may also like These Posts: