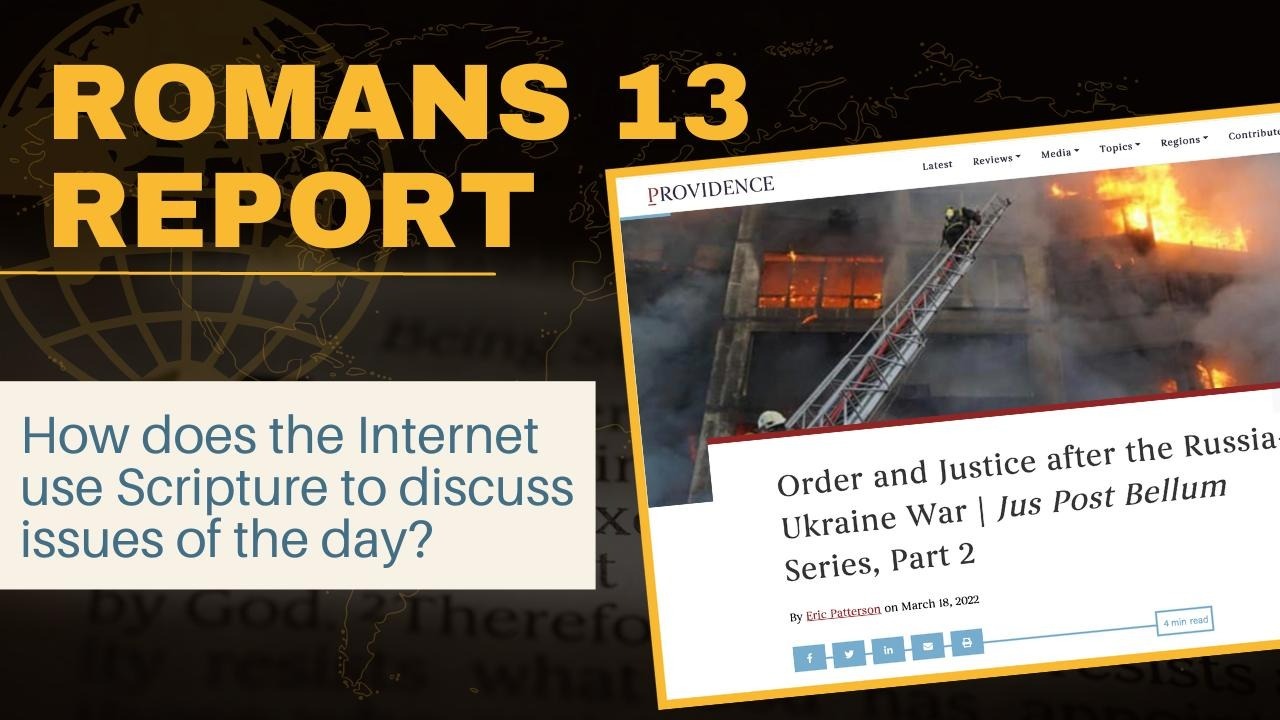 There’s a problem with proof-texting political authority and Romans 13. This article follows from my last post addressing the Russia-Ukraine War of 2022. And though the piece I’m critiquing itself is from earlier this year, bringing some additional measured analysis is still warranted considering the war drums continuing to beat and you are bound to hear similar arguments in the future for similar purposes.

The particular op-ed in question, titled Order and Justice after the Russia-Ukraine War, was written by Eric Patterson for Providence, the blog/magazine of the Institute for Religion and Democracy based in Washington D.C. The author begins by describing a bit of just war theory (JWT), and while I don’t want to address JWT specifically it behooves us to remember that there are some strong criticisms of JWT as well, including that of our friend Laurence Vance.

More important in this moment, though, is noting the author’s explanation of “the explicitly Christian foundations for thinking about political order.” When you see these kinds of statements, you can bet that overly broad explanations are soon to follow. Parsing through the explanation is often a bit difficult. What I intend in the following is to break down the author’s statements so that you can gain some insight into what to target when you encounter similar things in the wild.

This statement tries to accomplish quite a lot with few words, but is it correct? Is it proper to reduce Romans 13 to describing the moral purpose of political authority at all?

What Patterson is doing here is allowing Romans 13 to be a prescriptive justification for the existence of human government, and in context of the whole of Scripture amounts to a measure of proof-texting. You can see as much by him saying this statement is “brief but comprehensive.” Of course, any citation of just a few verses will be brief, so that is not particularly material, but calling it “comprehensive” misses the overwhelming narrative of the Bible against the powers. In other words, theology of the state doesn’t begin and end with Romans 13. Romans 13 is not a shortcut to being right about government.

Greeting those in “public service” equivalent to support?

“Thus, both Peter and Paul exhort us to pray for governing authorities. Paul sends personal greetings to those in public service, such as ‘members of Caesar’s household’ and ‘Zenas the lawyer.’ Jesus and the Apostles have encounters with representatives of Roman order, such as a centurion who worried about his daughter’s illness or Cornelius of the Italian regiment. No New Testament leader who encounters political authorities—John the Baptist, Jesus, the Apostles—ever derides government itself.” – Patterson

Patterson signals here that because of this particular stance on human governments, the following things flow from it or support the position. But again, do they really? Greeting those in “public service” does not constitute supporting the state. If I met President Biden at a restaurant, I don’t think I’m particularly obligated to go into preaching mode. Besides, Patterson is slightly mistaken that the “members of Caesar’s household” are receiving his greetings. They are actually sending their greetings, according to Philippians 4:22, which is potentially remarkable precisely because one does not expect Christians to be in that household.

This is perhaps Paul’s pseudo-coded way of saying that his gospel mission is proceeding well, when even those close to Caesar himself are becoming Christians. The backdrop of that, of course, is that the Roman state is against Christians. Paul would be writing at the time of Nero, one of the greatest persecutors of Christians to ever live. But are we to also believe that Nero/Rome is accomplishing that Romans 13 injunction to be promoting good and restraining evil? Maybe that statement is not as comprehensive as previously thought?

Additionally, what does it matter that Jesus’ interactions with the centurion or the Apostles with Cornelius were positive? It’s not like they thanked them for their service and in appreciation healed/preached. No, God’s gospel of mercy is open to all, no matter where you’re at, and that’s the moral of the story.

Then again, how sure are we that government is not held in contempt (i.e., the meaning of “to deride”) in the New Testament? If anything, we see time and time again that Jesus/God is not a “respecter of persons”, so there’s nothing special about the moral authority of political leaders. They are held to exactly the same standard, and perhaps a greater one precisely because they personally claim power. From the temptations of Jesus, we can see that the Kingdoms of the Earth belong to the Satan, who can realistically give them to Jesus.

The Roman state’s coinage itself was full of blasphemy by its inscriptions claiming Caesar was a god, and thus the “Render to Caesar” passage is an indictment of all our rebellion against God but especially that of those in power. If you don’t get from Revelation that the trajectory and destiny of human governments is rebellion and destruction, then you’re missing the point of the entire book.

Political Order Equivalent to the State?

“Government, alongside the family and the church, is one of the basic institutions that God has created for ordering society. The Catholic doctrine of subsidiarity and the Protestant doctrine of sphere sovereignty, though slightly different, say that God established political order as necessary for human good and flourishing.” – Patterson

This is a common refrain among many Christian thinkers: God “ordained” three particularly “good” institutions: family, church, and the state. Of course, saying so doesn’t make it so, and the corpus of biblical evidence suggests an arguably more nuanced view. God has ordained many things besides these three. God can even be said to have ordained Satan, yet we know that this does not justify Satan’s actions. The reason we can say this about Satan is that his actions do not fall outside of God’s overarching sovereignty in creation (however you choose to broadly or narrowly define sovereignty, this is defensible).

Likewise, the state is “ordained” inasmuch as it is not outside of God’s plan, whereas the family and the church are “ordained” in the sense of moral or prescriptive authorization. Thus, God uses civil governance as a means to his ends, but this fact does not justify the evils committed by the state. (For a poignant example of this, see Habakkuk 1:12-14 and the surrounding context.)

Everyone did what was right in their own eyes?

“Think about the damning statement at the end of the book of Judges: ‘Everyone did what was right in their own eyes.’ This is not just a statement of spiritual chaos. The book of Judges also demonstrates the feebleness of ancient Israel’s political institutions and the social rebellion and near anarchy that many common people experienced in what was supposed to be the Promised Land. That is disorder. There are lessons here for a society that chooses to turn its back on the reality of God’s moral order: its political system is doomed.” – Patterson

I always find it a little strange that the logic and approach to the book of Judges was that everything was bad and awful until the Israelites got their monarchy, then order finally ensued. It’s as though they completely miss the story of Gideon and his sons, and finally the word of Samuel telling them what would happen if they got their requested king. (See Judges 8-9 and 1 Samuel 8.) Furthermore, the kings were definitely not an obvious improvement, when really the institution of the monarchy resulted in gross disobedience and idolatry, splitting of northern and southern kingdoms, and eventual exile from their promised land. In a sense, using Israel’s political history as a defense of the state is even stranger proof-texting than Romans 13.

Therefore, while Patterson is correct that those rejecting God’s moral order will find their political situation doomed, the result of that rejection is in fact the State itself, not the lack of one. (Incidentally, I will also talk about the book of Judges in a Faith Seeking Freedom Podcast episode. Subscribe and check it out!)

But enough, I should conclude my critique. The endpoint is simply that when you, dear reader, see these kinds of statements in popular writings, they may seem overwhelming at first, but you can unpack them with careful logical analysis. Observe the flow of the argument, detect the entailments and proof-texting errors, then bring forward good questions that expose the flaws.

One final point to commend Mr. Patterson. Even if we may disagree on theology and perhaps even what to do about the Ukraine situation from a policy standpoint, I fully agree with him on being vocal against what Russia is doing. Kudos for this particular statement:

“Justice behooves us, therefore, to categorically say that the Russian invasion and its destructive nature is wrong. It is wrong in its motives; it is wrong in its wanton aggression; it is wrong in the violation of international covenants signed by Russia. Justice begins by recognizing the moral qualities of the situation.” – Patterson 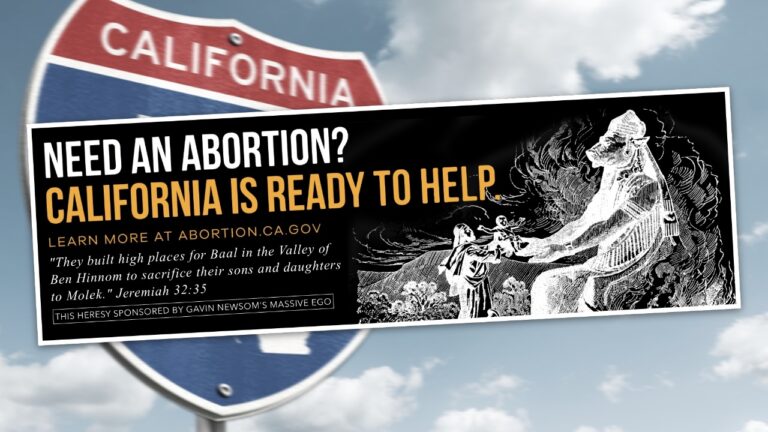 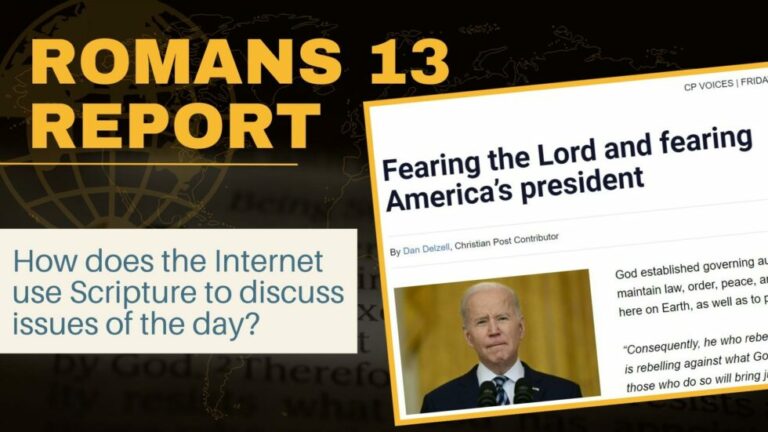 Read More »
PrevPrevEp 297: Speaking as a Comedian, with Lou Perez
NextEp 298: Deceiving Others for a Living, with Doc DixonNext