Swords into Plowshares: What WWI and Nagasaki Should Remind Us About Christmas 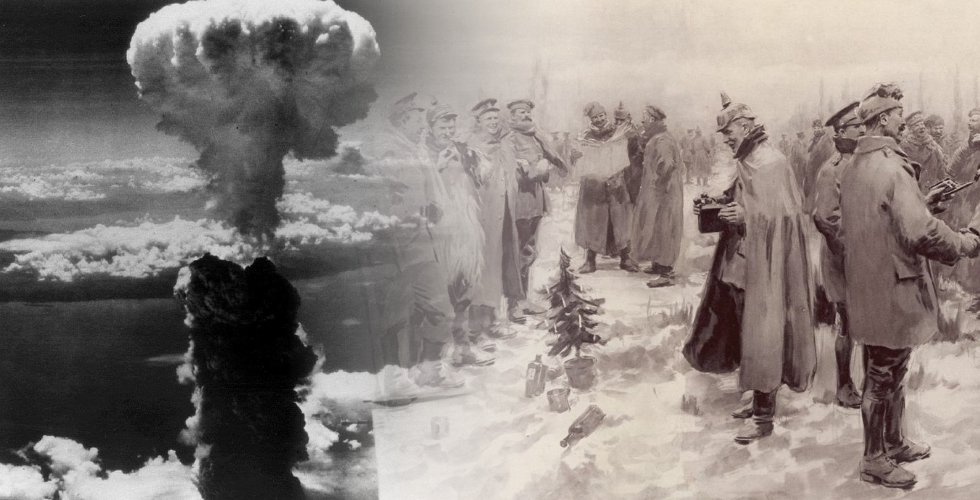 This guest post by Cody Cook. Cody Cook is a theology graduate student and the author of several books, including Fight the Powers: What the Bible Says About the Relationship Between Spiritual Forces and Human Governments and Unhitched: Why Jesus Can’t Be Divorced from the Old Testament. He is also the host of the podcast Cantus Firmus. His work can be found at www.cantus-firmus.com

Comparing Nagasaki to the Christmas Truce of WWI

When the Jewish prophet Isaiah wrote of the coming Messiah, he presented a figure who would cause the nations to “hammer their swords into plowshares… Nation will not lift up sword against nation, and never again will they learn war… There will be no end to the increase of His government or of peace.” (Isaiah 2:4,  9:7, NASB). In other words, Messiah was to be a king over all nations and make peace where there was once division between nations.

The Messiah taught us to turn our swords into plowshares

The New Testament tells us that Christ’s birth meant that God has brought kings down from their thrones (Luke 1:52), that Jesus became our peace to demolish barriers between nations in reconciliation (Ephesians 2:14-15), and that followers of Jesus would not engage in violence but love their enemies (Matthew 5:38-48). Christmas commemorates His coming.

Not long after the New Testament books were written, church fathers like Justin Martyr and Irenaeus wrote that Isaiah’s prophecy about swords being beaten into plowshares had been fulfilled by Christians who “proclaimed to every race of men that they were sent by Christ to teach to all the word of God; and we who formerly used to murder one another [now] refrain from making war upon our enemies” (Justin, 1 Apology, ch. 39) and “are now unaccustomed to fighting, but when smitten, offer also the other cheek” (Irenaeus, Against Heresies Book IV, ch. 34). The early church saw clearly that the message of peace is integral to the Christmas event.

Flashing forward more than a millennia, the Jesuit missionary Francis Xavier sailed to Japan in 1549 to plant a church. In the next century, this church met terrible and violent persecutions from the Japanese government, including crucifixion (Some of this persecution is presented in the fictionalized book Silence by Shūsaku Endō, also made into a film by Martin Scorsese.)

When the dust settled, it seemed that the Japanese church had been utterly destroyed. And yet, in the 19th century when Japan loosened its restrictive trade policies and stopped zealously guarding its ancient cultural values, Japanese Christians who had been worshipping secretly for 250 years emerged from the shadows. By 1917, a large and beautiful Cathedral had been built in Nagasaki as a testament to the staying power of Japanese Christianity, but not for long.

As Dean Taylor, author of A Change of Allegiance, tells us:

“Early in the morning of August 9, 1945, a few young American Christians from another part of the world, met with two chaplains—one Lutheran and the other Catholic—for a little prayer meeting before they started their day’s work. After the prayer, these two American Christians climbed into their B-29 Super Fortress long-distance bomber and began heading for Nagasaki.

Tragically, history records that St. Mary’s Cathedral was one of the very landmarks these American Christians had been told to look for as they flew into the target zone. Shortly after the pilot identified the cathedral, he ordered the atom bomb to be dropped.”

“At 11:02 am, Nagasaki Christianity was boiled, evaporated and carbonized in a scorching, radioactive fireball. The persecuted, vibrant, faithful, surviving center of Japanese Christianity had become ground zero.

“And what the Japanese Imperial government could not do in over 200 years of persecution, American Christians did in 9 seconds. The entire worshipping community of Nagasaki was wiped out.”[1]

So what happened? How did the church go from beating its swords into plowshares and refusing to make war on its enemies to vaporizing their brothers and sisters in Christ? They did it by forgetting the meaning of Christmas. Christians neglected to integrate into their own stories the story of God becoming a man to reconcile all men to Himself and to one another. They forgot the command to beat swords into plowshares.

Christmas Eve, 1914, shows us to turn our swords into plowshares

But sometimes Christmas breaks in anyway. Once it did so right in the midst of war. On the first Christmas Eve of World War I, in 1914, the bright promise of Christmas parted the gloomy clouds of conflict when soldiers from both sides emerged from their trenches and celebrated Christmas together.

Germans began singing “Silent Night” only to be met with British soldiers singing “The First Noel.” In another location, the Germans shouted Merry Christmas to Brits and were answered in kind. Combatants on both sides met in “no man’s land” to share photos of their sweethearts, exchange drinks, and play soccer together. Soldiers could even bury their fallen comrades without fear of being shot at by their “enemies.”

During this Christmas truce, soldiers from so-called Christian countries experienced Christmas in its fullness, but only for a little while. Soon after, it was back to the business of wholesale slaughter on behalf of men comfortably calling the shots many miles from danger. At the risk of sounding like a Christmas movie cliché, we need to keep the Christmas spirit of beating our swords into plowshares in our hearts all year long—not just long enough to exchange pleasantries, bury our dead, and go right back to killing one another.

Did you like Swords into Plowshares: What WWI and Nagasaki Should Remind Us About Christmas?
You may also like These Posts: