Should Christians Call on the State to End Gun Violence? 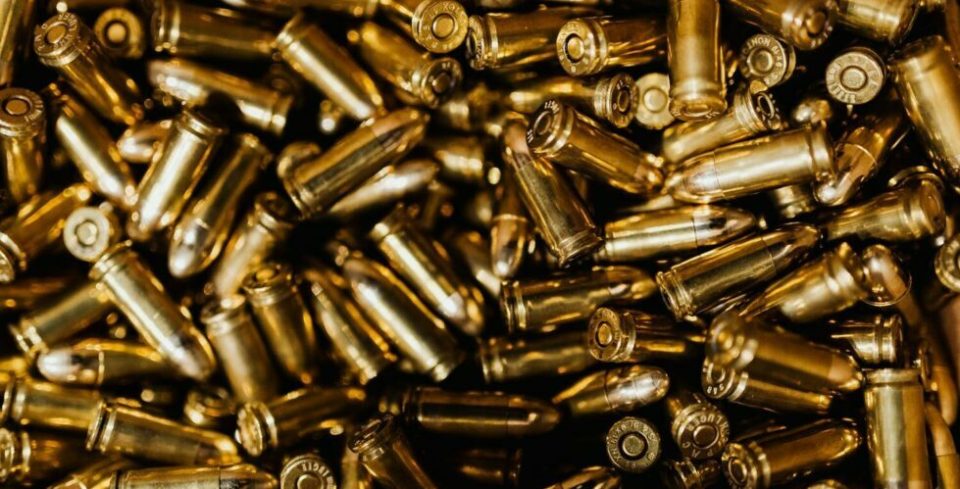 This is a guest post by Kollin Fields. Kollin is an Adjunct Professor of History, and a Ph.D. candidate in American intellectual history and political philosophy. His essays have appeared at the Libertarian Christian Institute, the Foundation for Economic Education, the Mises Institute, and elsewhere. His scholarly work has been published in the Christian Libertarian Review, a project of LCI. He may be reached at his website, www.kollinfields.com.

“And behold, one of those who were with Jesus stretched out his hand and drew his sword and struck the servant of the high priest and cut off his ear. Then Jesus said to him, ‘Put your sword back into its place. For all who take the sword will perish by the sword.’” -Matthew 26:51-21 ESV

Christian libertarians should know better than anyone that the way of Christ is the way of peace. Jesus did not pursue earthly power, even though most Jews expected a king who would rival Caesar. They got a king, but he taught that those who follow him should put others ahead of themselves, that they should wash each other’s feet and serve the widows and orphans in their distress. He didn’t look like a king. His triumphal entry started on a donkey. He didn’t tell his followers to take up a sword, but rather a cross. They would be fishers of men, and Christ the prince of peace.

Christians libertarians debate the idea of pacifism, but at the very least we all agree on refusing to initiate violence. American Christians are put in a unique position, though, since our history is chock-full of supposedly necessary and glorious armed conflict, beginning with our origin story in the War for Independence. We recently had Memorial Day, which has become a day to thank former and past soldiers for their service, in addition to remembering those who died in wars. Our schools and history books memorialize our bloody past, which then exacerbates the “gun culture” that many believe is directly behind the seemingly ubiquitous mass shootings. What’s a Christian libertarian to do?

The debate over pacifism versus armed self-defense is unlikely to be settled anytime soon, but Christian libertarians offer a unique perspective in showing how the desired cure will be worse than the disease. After recent shootings, a few prominent voices in “theology Twitter” criticized America’s gun culture and the lack of action on the part of lawmakers. 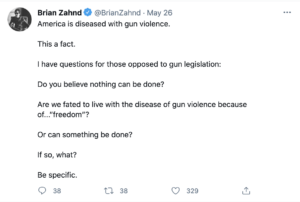 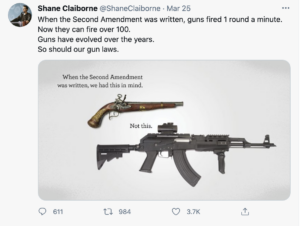 The implication is that regulating gun ownership is as simple as putting up a new stop sign: it is a matter of using the force of the state to achieve moral ends. But the idea that the state can be moral is the Achilles heel of American evangelicalism. And this tradition is nothing new. America’s first colonies at Jamestown and Massachusetts Bay were essentially theocratic, using political power to enforce Christian ethics. Colonists could be fined or punished for not attending church, dressing incorrectly, or engaging in vices such as card playing or dancing around a maypole. Local taxes even funded pastors’ salaries. And of course, Catholic and Quaker traditions were outlawed in most colonies and responded to with capital punishment in some cases.

When modern Christians call on the state for reform, they imitate the failed attempts of the American reform tradition to use the state for moral purposes. Even many of the Founders were famously averse to liberal culture, mourning the supposed decadence of a libertine post-colonial society; the historian Thaddeus Russell chronicles how John Adams was “disgusted” walking down the streets of Boston as commoners drank, danced, and mixed with non-whites. The first major reform movements in America revolved around alcohol temperance and what was called Sabbatarianism, or strict observance of the Sabbath. A century later, America’s Progressive Era was a writ large attempt at using the state to enforce the morality of the “Social Gospel,” culminating in the 18th Amendment which prohibited the manufacture and sale of alcohol. More recently, America has been waging a decades-long War on Drugs, which has served as the pretense for everything from global intervention to botched SWAT raids and racial profiling.

The point is not that Christians should be accepting of alcohol, drugs, or other vices, but looking to the state to curb immorality is asking the fox to watch the henhouse. Of course, drugs and booze are one thing, but isn’t our “gun culture” and mass shooting epidemic of such a magnitude that perhaps it should be obvious that Christians defer to the state to preserve life? Christians who want to “pass a law” or “see something done” when it comes to gun crimes and mass shootings are no doubt well-intentioned, but some of the worst mistakes in history come from good intentions. What are these Christians missing?

Reformers have often wrongly perceived the state as a moral body, or what John Dewey called an “ethical ideal.” The state makes and enforces laws—yes—but many see it as more than that, as some kind of metaphysical embodiment of the common good à la Rousseau. Some Christians then, in this long reform tradition, believe that Christian ethics can permeate the common good or common will, manifesting in this entity we call government. After all, doesn’t Romans 13 teach that all authority has been instituted by God? Shouldn’t we vote for men and women of faith?

But the state is not an ethical ideal or the manifestation of a common will; it is a group of sinful people—just as all humans are sinful—who codify and enforce social rights and wrongs. The keyword in that definition is “enforce”, and this is where Christians who want the state to intercede against gun violence miss the mark: they want the only group in the world that has ultimate political power and a legal claim to violence to be the ones to stop gun violence. It is paradoxical. It is as if some anti-gun Christians (which may well be the correct Biblical position) never account for the fact that the state has the biggest guns, both literally and metaphorically. If we are anti-gun, and if we “want something done” about mass shootings, why would we invite the largest mass-murdering agency in human history to right this wrong? A law is not some self-enforcing combination of words, it is a dictate and a mandate that is enforced through violence if need be. Christians err, then, in asking one homicidal group—the state—to police the homicidal group of mass shooters.

The track record of the American state is genocidal, from its treatment of Native Americans to imperialism to its use of atomic weapons that murdered hundreds of thousands of civilians. Estimates of recent civilian deaths in Iraq alone number nearly a quarter of a million. And this is the group we should be asking to write and enforce a new law to prevent more mass shootings?

A strong case for Christian libertarianism is that we correctly see the state as an institution grounded in violence, and therefore we never look to the state to achieve moral ends. Even moral ends such as ending further gun violence, when perpetrated through the immoral agency of the state, are wrong. Can we have any doubt that a new “War on Guns” would look any different than a War on Drugs or a War on Terror? Most of us cannot pretend to know how to end mass shootings, and talking vaguely about changing hearts and minds is not a very compelling approach after a mass shooting, nor is writing each one off as the product of living in a fallen world. Of course, we do live in a violent, sinful, fallen world, but this doesn’t mean we don’t have free will. We can personally choose to not own guns, we can beat spears into pruning hooks, and we can peacefully try to persuade others to follow our lead, but we cannot take up the sword of the state— we cannot call on the ultimate purveyor of violence to stop violence.

So we may not know what to do about mass shootings, but we know what not to do. As Murray Rothbard said, “…it is . . . the man who puts all the guns and all the decision-making power into the hands of the central government and then says, ‘Limit yourself’; it is he who is truly the impractical utopian.”

Did you like Should Christians Call on the State to End Gun Violence??
You may also like These Posts: