Jesus Wants Me to Break the Law 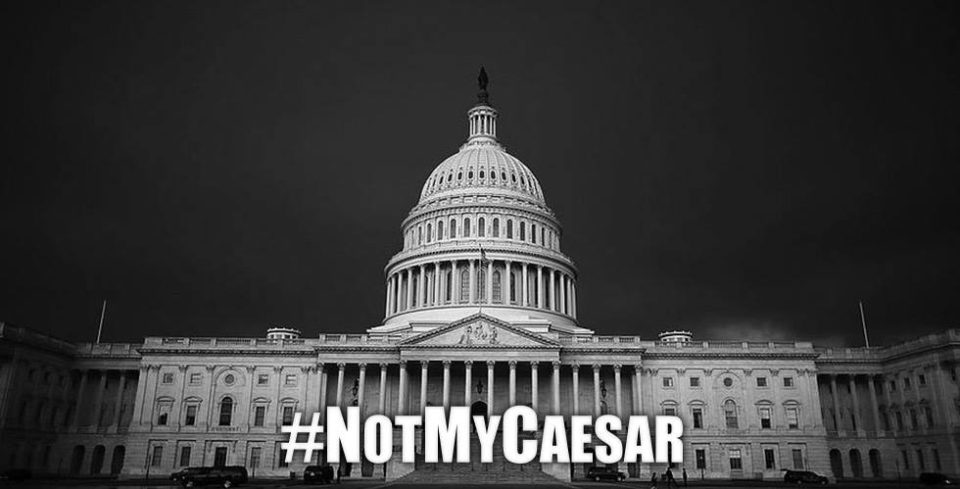 Early Christians understood that to proclaim Jesus is Lord and that their citizenship is in Heaven was to make a political statement: Caesar is not lord (or in today’s lingo, #NotMyCaesar). It was a pronouncement that the laws and customs of Caesar and his empire do not bind Christians; we follow the true Law and the true Lord, both of which are completely unlike our earthly lords and their man-made imperial laws. To have Christ as ‘Lord’ means to have a lord who lowers himself to serve others; he is the anti-lord. His law — the true Law, characterized by love and mercy — is ‘anti-law.’ Though in truth, it is any man-made laws which violate God’s Law (i.e., conflict with God’s character) which are truly anti-law.

Sadly, concessions were made by some parts of the church so as to make Christianity more compatible with empire, and eventually the church and empire fused in the fourth century. As Joerg Rieger writes in Christ and Empire, “References to Christ, who refused to go along with empire, were subsequently grafted onto other theologies that promised to be more supportive of the status quo” (p. 28).

And the rest, you could say, is history. This trend has continued since then, and thus in America we find that much of Christianity has subordinated its foundational principles to those of empire. To be a Christian in America is (by and large) to be a nationalist. As Rieger says, “when Christians in a context of empire are unaware of the political implications of their faith, their Christ is likely to be co-opted by empire by default” (p. 44). Other religions were made to serve empire; Christianity was meant to subvert it.

One of the largest casualties of this marriage (from hell?) has been the near-complete lack of distinction between law and morality, or between our ‘laws’ and God’s true Law. You are more likely to find a Christian wielding Romans 13 as a weapon than harnessing Christ’s liberating teachings about the law as communicated through the gospels. This overemphasis on Romans 13 has bred so much confusion that for libertarian Christians, a large amount of our time is spent hand-wringing over how to think about issues like cannabis use.

A major aspect of the problem is much the same as it was in Jesus’ day: the use of a biblicist hermeneutic to bolster an empire-driven agenda. As Daniel Migliore explains in Faith Seeking Understanding, a biblicist hermeneutic is one which views scripture itself as revelation rather than as a witness to God’s revelation mediated to us through flawed, human vessels. Thus, “biblical texts tend to be leveled in importance,” as Migliore says, with Old Testament portrayals of God commanding genocide bearing the same importance as the Beatitudes (p. 49). In short, it’s an approach that looks only at the flat, surface meaning of the words rather than seeking to understand the life-giving God behind them.

But our understanding of the character of God is what determines our vision for society. If God’s true character is nonviolent and non-coercive, this would naturally require us to be libertarians, and we can see that God’s true character is such because we recognize that the ultimate revelation of the character of God is Jesus Christ crucified (as Greg Boyd explains in Cross Vision: How the Crucifixion of Jesus Makes Sense of Old Testament Violence). It is through the lens of Christ crucified that we must interpret scripture.

Jesus himself demonstrated this method in his many teachings on the law. In several episodes described in the gospels, we find him critiquing the Pharisees and teachers of the law for failing to discern the true, merciful, and liberating character of God beneath their many man-made laws, traditions, and misinterpretations or overemphases of the law.

In the Sermon on the Mount, which recalls Moses receiving the law on Mount Sinai, Jesus not only reinterprets the old Jewish law; he also presents a new law. After delivering the Beatitudes, he declares that he has come to fulfill “the law [and] the prophets,” which is summarized by the commandments to love God with all our heart, soul, and mind, and to love our neighbor as ourselves (Mt 5:17-20;7:12; 22:34-40). He then proceeds to address teachings or interpretations of Jewish law, providing his own authoritative teaching which emphasizes the spiritual nature of the law. In other words, it isn’t enough to merely abstain from murder or adultery; we must understand that the very conditions of our heart which are the source of these sins are the true focus of God’s Law.

Instead of proportional retaliation (“an eye for an eye,” which is sanctioned in the Torah) and hatred of enemies, Jesus instead prescribes forgiveness and love. When the Pharisees criticize Jesus and his disciples for “doing what is not lawful to do on the sabbath,” Jesus responds by declaring that God’s requirements of mercy trump sabbath observance. In the Gospel of Mark, we read him pronouncing that “the sabbath was made for humankind, and not humankind for the sabbath” (Mk 2:27; cf. Mk 3; Mt 12). In his instructions regarding divorce, Jesus again makes clear that a surface-level reading of the law of Moses does not always conform to the Law of God when he says, “It was because you were so hard-hearted that Moses allowed you to divorce your wives, but from the beginning it was not so” (Mt 19:8).

Jesus demonstrated the practice of using scripture’s witness to the revelation of God to correct scripture itself. He revealed that in order to truly fulfill “the law and the prophets,” it is necessary to see through them to discern the loving and merciful God fully revealed in Christ crucified; all of scripture (and all laws, for that matter) must be interpreted through this lens. Like a surprise ending, the crucifixion sheds new light on scripture by revealing the nonviolent, self-sacrificial, and loving character of God. Accordingly, legalistic interpretations of the Bible are insufficient if they do not ultimately and truly lead us back to this understanding of God as revealed in Christ.

So when we are faced with questions pertaining to our own man-made laws, we must remember that they also were made to serve humankind, not the other way around. We cannot approach man-made laws with a hermeneutic that uses Romans 13 to equate them with God’s Law (or as extensions of it). We must recognize that all laws must be subordinated to the true Law: that which requires us to love God and others. Any laws that prevent us from doing so — or worse, which directly cause harm to our neighbor — are anti-law.

It is therefore anti-law to restrict access to medication from those who are suffering as part of the “War on Drugs,” to prohibit feeding and housing the homeless, to turn away refugees and so on. It is more lawful (from God’s view) to break such man-made anti-laws, if that is what is required to show mercy or to ease someone’s suffering. It is also anti-law to support state violence against those who do break such anti-laws. If the laws were made for humankind but they aren’t serving us, or they are preventing us from serving others, then they’re no laws at all. For those of us with citizenship in Heaven, whose humble Lord is Christ, breaking such anti-laws should be second nature.