Law Has Become the Anonymous Violence of the Crowd 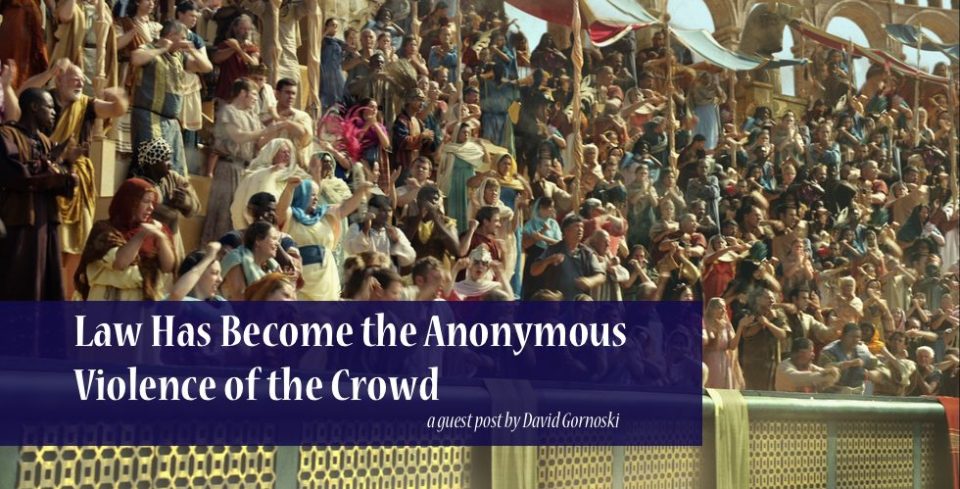 If black lives matter to you, you wouldn’t use violence to punish nonviolent behaviors. As the late Philando Castile’s mother said, “He lived by the law, he died by the law.” The law – the mechanism by which we maintain peace in our society – betrayed him. But this is not an alien construct that has imposed itself upon us. No, we are all complicit in a law that has enshrined chaos as justice.

Some of us scapegoat the policemen we hire to carry out these chaos-causing anti-laws. Some scapegoat the victims of these chaos-causing anti-laws. But rarely do we ever step back and see the cause for what it really is: our ancient, universal need to use violence and domination to subdue those who disagree with us. Whether it’s the drug user, unlicensed driver, prostitute, tax objector, or raw milk seller – we insist on blindly using violence: hiring armed agents to subdue, capture and cage nonviolent human beings.

Of course, none of us would barge into these people’s homes or cars ourselves with firearms drawn. None of us would do it on our own if we lived on an island with these persons. Not one of us would put our knee on the back of our neighbor’s neck, electrocute him, draw a gun, kidnap him in a cage in the back of our car and place him in a shame cage with actual violent persons, leaving him unable to protect himself from further collective violence and assault. None of us would do that to neighbors we found using drugs in their home or selling raw milk from their cow or being too greedy with how much of their labor they wish to pay the collective. But get a group together, get a mob or a crowd, or, even better, a cast of 50 million anonymous voters involved, and suddenly we become possessed – suddenly things we would find repulsive to do ourselves magically become “law and order.” This “law,” this addiction we have to using collective anonymous violence to dominate nonviolent people, betrayed Philando Castile when it sent an armed man to take money from him so he would fix his taillight. And it will betray us all if we do not repent of it and exorcise it out of our civilization.

Every time you vote or sit on a jury that results in the continuance of laws that initiate violence for nonviolent behaviors, you murder your brother.

Jesus said, “Those who live by the sword die by the sword.” Rather than making our law a shield – a defensive force that protects us from actual violence such as theft, fraud and assault – we make our law anti-law – a sword, an offensive weapon that seeks to criminalize nonviolent behavior under the alibi that if said behavior were allowed to persist, it could potentially cause future violence. Since virtually any controversial speech or nonviolent action could be subjectively determined to trigger future violence, this system can only result in chaos and factional rivalry. Who can agree as to what speech delivered, what substance consumed, what weapon owned, what fresh milk from a cow’s udder sold, what sermon preached, what vice partaken, what taillight left unfixed, could unleash the next violent outbreak? So we pre-empt this theoretical chaos with what? Chaos-causing, faction-creating, black-market-making, violence-based laws that dehumanize, dominate and cage our nonviolent neighbors who violate our taboos.

Since our Western conscience is pricked by the cultural memory of a God who was revealed naked, brutalized and lynched in the trash dump of his town for unlicensed speech crimes 2,000 years ago, we cannot agree on whom to victimize and who the true victims are. It’s hard for us to kick against the pricks. We cannot find lasting agreement, satisfaction and peace with these anti-laws that use violence for nonviolent acts. Yet we’re slow to renounce our anti-law systemic addiction because it feels good, makes us feel safe and helps us channel our own shame onto some other misfit society fears. We need our demon-possessed losers, for without them, what would we be?

True law is ingrained in real life; it cannot be created by us. It’s not the fantasy we call legislative law that we want oh so bad to take sides in making up. True law is simply the use of defensive force, a shield we use to prevent that which we would find morally right to forcefully prevent as individual persons – you know, when not possessed by a crowd. That means if you saw a person being defrauded, stolen from, or assaulted, you would be morally right to protect that person and, if necessary, use force to restrain and confine the attackers to protect the victim. That’s not the violence of living by a sword, it’s the force of a shield that defends victims. That’s law. You would not be possessed by crowd violence in supporting law that extends that same ethic to hiring defensive agents to prevent fraud, theft and assault. Any other law is fake. Any other law is resentment. Any other law is foolishness disguised as wisdom. Any other law will produce chaos and beget more violence.

If black lives matter to you, if life matters to you, never vote for an individual who continues to permit anti-law to be consecrated as law. Never again hire a government official – local, state, federal – that commands armed agents to use violence against nonviolent vices. Do not let your fear of the greedy millionaire you’ve never had lunch with, or the neighborhood weed user whose music is too loud, or the unlicensed driver whose car is dirty, make you submit your mind to the safety of the crowd mind and its need to point fingers and cast out monsters. You wouldn’t place the greedy tax objecting old man in a cage by yourself would you? You don’t even cage your chicken eggs. You wouldn’t put your knee on the back of the stoner kid’s head by yourself would you? You wouldn’t put a prostitute in a cage where rape is rampant, would you? Of course not, you’re a human being. It’d make you sick to your stomach to be so barbaric. You understand that it would only produce more alienation and chaos, not less. So don’t hire anyone on your behalf to do it.

Don’t repay what you deem evil – being greedy, high, obnoxious, dirty, rebellious, careless – with violence. Jesus says that repeatedly. Eight in 10 Americans – of all races, income levels, party affiliations – are united by their self-identification as Christian: the word means “little Jesus.” The one thing that unites us also divides us. Our culture is haunted by the cross. Living by the sword no longer unites us because Jesus exposed it as a lie. He asks humanity to make a choice: self-sacrifice or sacrifice of an other. Repent – don’t be scared secularists, that means renew your mind – from your fear. In other words, sacrifice your fear of your neighbor rather than sacrifice your neighbor.

Jesus once asked, “Who among you will cast the first stone?” With one question, he dismantled the crowd’s possession of anonymous violence. He personalized the responsibility and thereby destroyed the power of group violence. And he asks it of every one of us now, Who among you will carry out the next act of violence against your nonviolent neighbor? We cannot hide behind the veil of the voting or jury booth. Face to face, we must make our choice.

This article originally appeared on WND.

Did you like Law Has Become the Anonymous Violence of the Crowd?
You may also like These Posts:

Read More »
PrevPrevMeet the CFL Speakers (Part 3)
NextCalled to Freedom: Why You Can Be Christian and LibertarianNext