Power Politics in the Name of Love 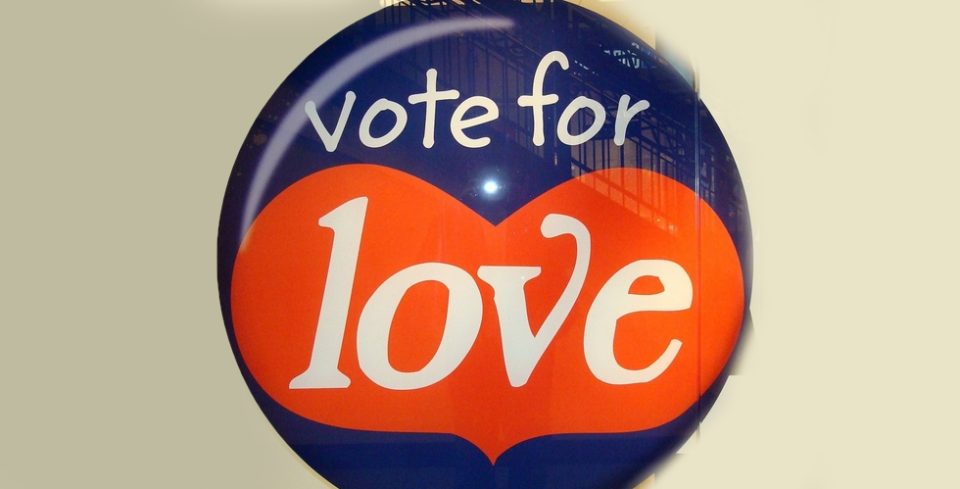 Christians in America continue to wrestle with the challenge of how best to engage politically following the corrosive aftermath of the 2016 Presidential election. Some evangelicals spent the first year of Donald Trump’s presidency drawing even brighter lines between the Trumpvangelicals and the #NeverTrumpers with each tribe trying to write the other out of the evangelical movement. The battle escalated when Roy Moore secured the GOP nomination for Senate in Alabama despite the emergence of allegations of sexual misconduct. Many have wondered if the term “evangelical” is even salvageable after being so closely associated with Trumpism and defenses of Roy Moore. As the finger pointing has begun to subside, options for the way forward have begun to emerge. Disappointingly, evangelicals continue to focus primarily upon the state rather than the Kingdom of God as the means of advancing the common good.

Politics as Loving Your Neighbor

One emerging approach is what we could call the Love Your Neighbor strategy. This approach can be seen in the recent work of author and former White House staffer, Michael Wear. During Barack Obama’s first term, Wear served in the White House faith-based initiative and then directed Obama’s faith outreach effort during the 2012 campaign. His book, Reclaiming Hope: Lessons Learned in the Obama White House About the Future of Faith in America, was endorsed by evangelicals such as Tim Keller, Russell Moore, and Andy Stanley and enjoyed a glowing review posted at The Gospel Coalition. (While I use Wear’s writing as an example of a sentiment I commonly see expressed by evangelicals, I do not intend to imply he would endorse the following approach exactly as I state it).

“First, as I argue in Reclaiming Hope, politics is a forum for loving your neighbor. A Christian’s vote should not be motivated primarily by self-expression, but by love of God and neighbor. The question a Christian should be asking as they enter the voting booth is ‘how can I best use my vote for the peace and prosperity of the political community in which God has placed me?’ When we vote, we do not think only of what we have at stake, but what our neighbors have at stake.” [emphasis original]

The Love Your Neighbor strategy sees politics as a significant means of demonstrating our love for our neighbors (and God) by voting in such a way as to promote the common good. It assumes that government is a benign, neutral body existing to represent the will of the people for the good of the people. If the people would simply choose good, moral, and wise representatives, they will by and large do what is best for the country. Sounds great, right? What could be wrong with that?

Coercion, Paternalism, and The Common Good

In his recent review of The Once and Future Liberal for The Gospel Coalition, Wear (sort of) critiques identity politics, lamenting the fact that “identity politics empowers people to speak for others without their consent.” Yet in the same article he suggests, “We ought to see our fates as inextricably linked with the fate of our neighbors – and act politically on their behalf.”

This gets to the heart of the problem with the Love Your Neighbor strategy. Our allegedly loving act of selflessly voting on behalf of our neighbors is speaking for our neighbors without their consent. It naively assumes that there is an identifiable, agreed-upon common good in our current political environment. This mindset is also highly patronizing towards others by assuming that we have a better understanding of what is best for our neighbors than they do.

We simply do not agree upon what the common good is in America. Acting politically on our neighbors’ behalf is ultimately one tribe’s (or coalition of tribe’s) vision of the common good versus another’s, carried out by means of the coercive power of the State. Whoever can garner 50.1% of the vote gets to coerce the other 49.9% into abiding by the other tribe’s vision of the common good whether the 49.9% of our neighbors believe it to actually be “good” or not. Even if our neighbor abhors the “good” we have forced upon them through our loving act of voting for their good, they’ll just have to live with it and accept it as the blessing from God we believe it to be.

Practically speaking, what does it even look like to vote for the good of the community motivated by love rather than individualistic self-interest anyway? Would the loving thing be to take a poll and vote with the majority of our community even if it were to compromise our sincerely held beliefs? Or do we go against the majority of the community because we know what they desire will actually harm them? The “community” calls that hate.

A Love Your Neighbor approach to politics is begging to be co-opted by politicians. Politicians love to leverage the rhetoric and sentiments of Christianity to further their agendas, and naïve Christians fall for it time and time again. Michael Wear fell for it as Obama’s Faith Outreach Director just as Eric Teetsel fell for it as Marco Rubio’s Faith Outreach Director, along with evangelicals such as Albert Mohler and Wayne Grudem who lend their names and reputations to the meaningless ‘Faith Advisory Boards’ of elites seeking greater power. Loving your neighbor by acting politically on their behalf is just another way of allowing political elites to co-opt the language of Christ for purposes that have nothing to do with Christ.

Looking to the politics of the American state rather than the supranational Kingdom of God as the expression of Christ’s command to love our neighbors smells a lot like idolatry. Rather than acting politically to impose a vision of the common good on our neighbor’s behalf whether they want us to or not, we could promote liberty and non-aggression in order to allow people to peacefully pursue what they believe to be “good.” We could use persuasion and peacemaking when we inevitably disagree on what “good” looks like. Otherwise we are simply engaging in good ol’ power politics, even if we pretend it’s love.