Smoking is Healthier than Fascism 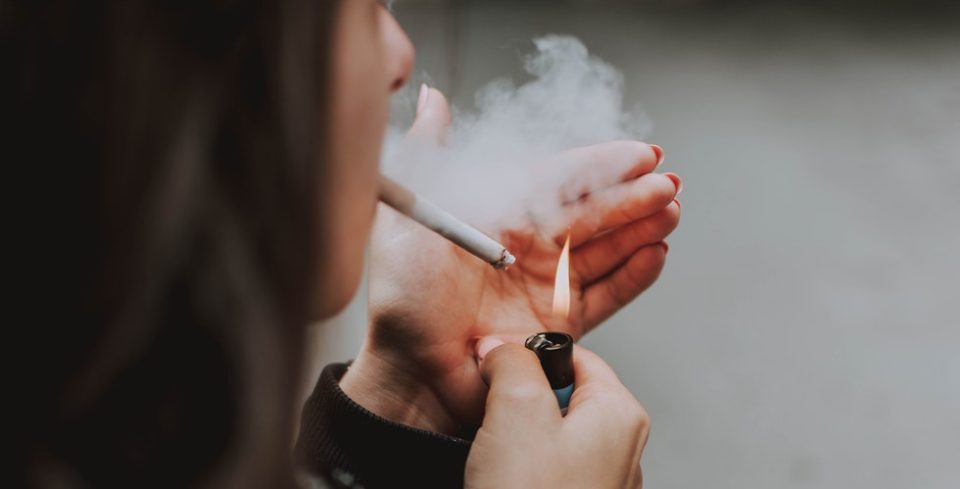 This article is #15 of a weekly series highlighting the former memes of Bureaucrash, an organization once headed by my friends Pete Eyre and Jason Talley of the Motorhome Diaries. The memes were originally authored by Pete Eyre and Anja Hartleb-Parson, and were intended as means of communicating ideas about liberty in catchy and succinct ways.

Smoking bans have gone into effect in many jurisdictions, mostly indoors (bars, restaurants, workplaces, casinos, even apartments and condos) but also outdoors (beaches, in front of public buildings, parks and stadiums). Under the auspices of “protecting people” the government tries to discourage individuals from smoking by levying “sin taxes” on the cigarettes they buy and prohibits smokers from lighting up in places they share with non-smokers. To dissuade people—especially young folks—from starting to smoke, the government has banned cigarette advertising from TV and radio.

Why we oppose anti-smoking legislation: 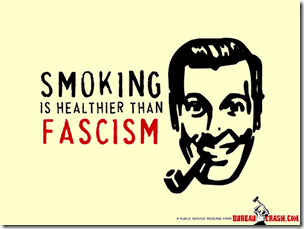 Smoking bans violate property rights. By legislating against smoking, the government initiates force. It initiates force against property owners—owners of bars, restaurants, private workplaces, apartments and condos—by prohibiting them from deciding whether to allow their employees, customers, guests and tenants to smoke. By contrast, none of these people are violating anyone’s rights because they are not initiating physical force. Smokers are not forcing anyone to endure their smoking; people are free to leave a smoky environment. No employer is forcing anyone to work in a place where many people smoke. More importantly, those who choose to work in establishments where smoking is allowed did just that—choose. There is no right to a job, and the employee freely weighed the pros and cons prior to taking the position. The government also initiates force against cigarette manufacturers and broadcasters by banning them from advertising on TV and radio even though an advertisement does not force anyone to smoke. So, the government is unjustly violating citizens’ rights by legislating against smoking.

Smoking bans violate self-ownership. The government does not have the right to protect you from doing what you want with your own body. Smoking may be unhealthy, but acknowledging and taking that risk is your choice. The government uses a gun to prevent you from harming yourself—now that is irony!

Smoking bans only further entrench the Nanny State. Anti-smoking legislation is a blatant example of the government using force to arbitrarily prevent people from doing things that the government deems harmful. Consider, for example, that the government does not prevent you from consuming alcohol, bungee jumping, becoming a fireman or a coal miner, or sky diving all activities that are potentially damaging to one’s health.

Smoking bans distort the free market. Many people realize that smoking can be a nuisance to nonsmokers. Hence, many restaurants had voluntarily become smoke-free absent of government coercion simply because of customer demand. Many workplaces had already made rules about where to smoke to address the needs of their nonsmoking employees. Many home owners ask guests not to smoke in their homes, and many smokers do not smoke in their home because they have nonsmokers living there. Many parents, even those who smoke, are perfectly willing to limit their children’s exposure to smoke if they believe it is harmful; no law is needed when a mother’s protective instinct is already operative.

Smoking bans aren’t supported by science. As for the dangers of second-hand smoke, while it is unpleasant, most studies investigating its effects looked at people who are exposed to it on a daily and prolonged basis, such as individuals who live with smokers, not people who go to bars, restaurants or are outside in the immediate vicinity of a smoker. Those studies did not always find that second-hand smoke harmed anyone.