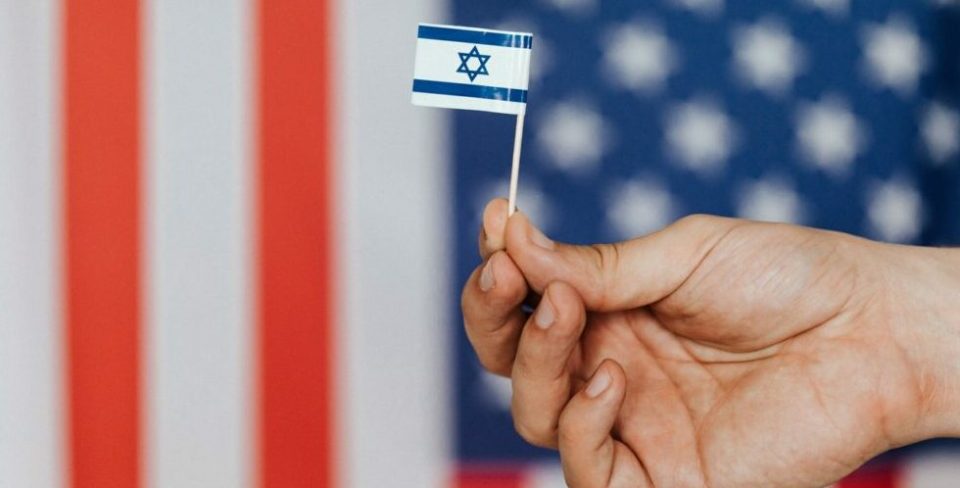 LibertarianChristians.com is pleased to welcome Scott Ritsema of CivicsNews.com to write our first-ever guest post. Scott is the editor of CivicsNews.com and the author of The Way, The Truth, and the Sword: A New Christian Civics in an Age of Coercive Power. The views expressed in the any guest article should not be construed as the official position of LibertarianChristians.com and are the work of the guest author alone.

How should Christians view the on-going conflict between Israel and Palestine? Total war upon civilian populations. Terrorism. Radicalizing one’s opponents. The Jewish peoples’ claim to the land. These are sensitive, but extremely important issues that the Christian or any person with a conscience must face head on.

First, Christians should make no distinction between an Israeli child and a Palestinian child. And regardless of the perpetrator, “collateral damage” is a disgusting euphemism that dehumanizes image-bearers of God and masks the evil nature of the deliberate slaughter that is modern warfare. The scores of innocent Palestinian civilians that have been killed in recent days did nothing wrong, and their deaths have not been an accident. Hamas is obviously bad, but Christians must also point out the evils of the state of Israel. We should make no distinction.

Glenn Greenwald at Salon.com helps us consider the excesses of the Israeli attacks.

Any minimally decent human being — even those who view the world through the most blindingly pro-Israeli lens possible, the ones who justify anything and everything Israel does, and who discuss these events with a bottomless emphasis on the primitive (though dangerous) rockets lobbed by Hamas into Southern Israel but without even mentioning the ongoing four-decades brutal occupation or the recent, grotesquely inhumane blockade of Gaza — would find the slaughter of scores of innocent Palestinians to be a horrible and deeply lamentable event.

And Linda Heard points out the disproportionate violence that has become customary for the Israelis:

I believe only one Israeli has died during this current onslaught that has robbed the lives of over 320 Palestinians and wounded up to 1,000, not including those still buried beneath rubble. Once more, Israel’s response has been disproportionate just as it was in 2006 when it slaughtered 1,200 Lebanese civilians in answer to Hezbollah’s kidnapping of IDF soldiers. […] When it comes to Gaza, said to be one of the most densely populated areas of the world, there is no such thing as a surgical strike. Moreover, over half of Gaza’s population are children under 18. Even the smartest smart bombs could not cherry-pick between resistance fighters and innocents in such a packed environment. The Israeli government knows this and doesn’t care a jot, which translates to willful collective punishment

For Israel to bomb civilians is indeed a violation of the Geneva Conventions’ prohibition of “collective punishment.” To kill civilians because they live near Hamas militants is wrong and illegal, and Christians should point that out, just as we speak against Hamas‘ violent acts. As Congressman Dennis Kucinich stated,

The perpetrators of attacks against Israel must also be brought to justice, but Israel cannot create a war against an entire people in order to attempt to bring to justice the few who are responsible … All this was, and is, disproportionate, indiscriminate mass violence in violation of international law. Israel is not exempt from international law and must be held accountable. It is time for the UN to not just call for a cease-fire, but for an inquiry as to Israel’s actions.

As Raw Story explains, “Kucinich compared the latest bombing campaign to Israel’s earlier strikes at southern Lebanon targeted at Hezbollah. Then too, he said, civilians were killed, infrastructure was destroyed and lawlessness took hold in the country.”

Unfortunately the leadership of both parties, including Harry Reid and President Bush, don’t have the same moral courage as Kucinich, as they have only signaled support for Israel’s actions. Obama has sheepishly refused to comment.

Amira Hass in Haaretz helps paint a picture of the horrors of Gaza in recent days:

There are many corpses and wounded, every moment another casualty is added
to the list of the dead, and there is no more room in the morgue.

Relatives search among the bodies and the wounded in order to bring the dead quickly to burial. A mother whose three school-age children were killed, and are piled one on top of the other in the morgue, screams and then cries, screams again and then is silent.

Mustapha Ibrahim saw all this on Saturday at one in the afternoon, at Shifa Hospital in Gaza. As a field investigator for a human rights organization, he thought he’d been immunized, but nothing prepared him for what he saw. Wounded people whose situation was less than serious were asked to leave Shifa, in order to free up beds.

Dr. Haidar Eid is a lecturer in Cultural Studies at Al-Aqsa University. He, too, saw the bodies and the wounded on Saturday. Also the children whose limbs had been amputated.

Beyond this, Christians must recognize and point out that our media and political establishment are extremely biased in favor of Israel. Hamas are “terrorists”, but Israel “has every right to” bomb civilian populations? Really? And Kurt Nimmo points out that both sides have continually balked at ceasefires, not just Hamas, as the media portray:

Hamas has attempted to implement a ceasefire with Israel on numerous occasions. “Israel rejected a cease-fire offer from the Palestinian group Hamas as a humanitarian aid crisis erupting in the Gaza Strip threatened wider instability,” the Christian Science Monitor reported in April. “[The] Palestinian group offered to cease cross-border rocket attacks if Israel opens crossing points into Gaza and ends military incursions into the Palestinian territory,” Al Jazeera reported.

Christians must also ask difficult questions about Israel’s own ties to militant Islamic groups. Nimmo points out how, in 2002, Israel was caught creating fake al Qaeda operatives, presumably for the purpose of radicalizing and demonizing the Palestinians:

In 2002, “Palestinian security forces … arrested a group of Palestinians for collaborating with Israel and posing as operatives of Osama bin Laden’s al–Qaeda terrorist network,” the Sydney Morning Herald reported. “The arrests come two days after Israeli Prime Minister Ariel Sharon charged al–Qaeda militants were operating in Gaza and in Lebanon.” An anonymous Palestinian official told the newspaper the alleged collaborators sought to “discredit the Palestinian people, justify every Israeli crime and provide reasons to carry out a new (military) aggression in the Gaza Strip.”

And most ominously of all, it was actually Israel that helped to found Hamas in the late 1970s, with the goal of radicalizing Palestinians as a counterbalance against the secular nationalism of the Palestinian Liberation Organization.

Israeli intelligence created Hamas as a counterweight to the PLO and Arab nationalism. Israel “aided Hamas directly — the Israelis wanted to use it as a counterbalance to the PLO,” Tony Cordesman, Middle East analyst for the Center for Strategic Studies, told UPI correspondent Richard Sale. (see Yossi Schwartz, Palestine: The origins of Hamas and its role today).

Israel has funded and helped to create radical Muslim enemies. Why? Is it possible that the mainstream media are not reporting the whole story behind the Israeli-Palestinian conflict? Should Christians think twice before anointing Israel as the “good guys” here? Why, in the realm of human kingdoms, do we even look for a “good guy” at all?

Last of all, how should the Christian approach the issue of the land that the Israelites were given in the Old Testament? The answer is quite simple. The Old Covenant, as it related to Israel and the Promised Land, was conditional: God told Israel over and over that if they were faithful to Him, they could remain in the land; if they were not faithful, then they had no right to the land. Therefore, since the Jews occupying the land today are not followers of the triune God, as revealed through Jesus the Son, they have no claim on the land. [Not to mention the fact that promises about the land of literal Israel have been fulfilled spiritually in the New Testament as the true Israel is the international church of God, made up of Jews and Gentiles alike, rather than one ethnic group with its national boundaries (See Chapter 6 of The Way, the Truth and the Sword).] The Christian should uphold the biblical teaching that the Jews, at a theological level, have no right to the land today, and that God’s Israel has gone global, transcending ethnic and geographic boundaries.

Christians will not be “cursed by God” if they expose the evils of the Israeli government, as the fear-mongering Christian Zionists claim. Instead, if we speak out against violence, we will be doing an important service to the gospel, since the world perceives the Israeli government as being in league with the Christian West (and with the U.S. sending 3 billion a year in military aid to Israel, who can blame them for drawing this assumption?). Since Christianity is associated with the excesses of the state of Israel, we must clarify for the world that we have nothing to do with and we do not support their crimes, but that we follow a Messiah who teaches non-violence. Christians must be known for being peacemakers.

See more articles on Israel and Zionism from Scott Ritsema on CivicsNews.com.

For further commentary on the Israel-Palestine Conflict: