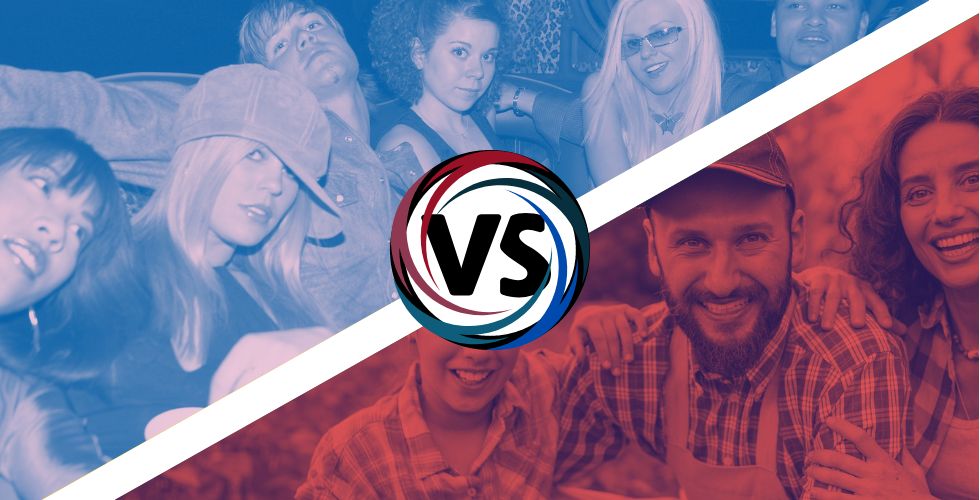 As much as sensible libertarians would like to be discussing and debating substantive issues like the national budget, economic freedom, and sensible immigration policy, these topics garner vanishingly little conversation in most news media or political discussion. For instance, entitlement spending makes up two-thirds of the national budget and aging demographics ensure that spending in this area will continue to grow faster than the economy for the foreseeable future. However, this topic gets virtually no attention in political news or conversation. This is due to a new culture war that has come to dominate American politics.

A large portion of the increased cost of living over the last year is due to economically disastrous federal policies, such as high tariffs and the Jones Act which restricts domestic ocean shipping to American manned and domiciled ships. However, except in some libertarian circles, this topic gets almost no attention. Despite the fact that each major party likes to pillory the other party’s handling of the border when the latter is in power, both parties have a strikingly similar policy toward immigration. Yet, the news media portrays the gap between the parties on immigration as massive.

On the other hand, the culture wars and social issues have captured the nation’s attention more than they did 10 or 20 years ago. There is some data to illustrate this. In 2012, 45% of Americans cited the economy as the most important problem facing the country. By 2017, that percentage had dropped to 10%. What is the biggest problem as of April 2022? According to Gallup polling, “government” and “poor leadership” – likely referring primarily to the other party.

Culture Wars As A Recurring Phenomenon

American politics seems to be increasingly defined by cultural identity rather than policy differences. Surprisingly, conservatives and liberals largely agree on a wide swathe of issues:

Admittedly, this phenomenon of a stark culture war masking a narrow divide between the major political parties on most policy issues is not new.

Most people associate Ronald Reagan with a Friedman-esque economic liberalization during the 1980s. However, most of the major deregulations began under Democratic President Jimmy Carter just years before. Carter even accomplished an $18 billion tax cut bill in 1978. Most importantly,  Paul Volcker, Reagan’s iron-spined Fed chairman who raised interest rates to levels never seen before, high enough to break the back of inflation, was in fact, first appointed by Carter.

However, cultural issues like abortion and gay rights represented the starkest difference between the two sides in the 1980 election. The same phenomenon occurred in the 1990s, when President Clinton and House Speaker Newt Gingrich were cast in the media as bitter enemies, where the former represented an egalitarian New America and the latter the traditions of patriotism and family values. But the two worked together on several major pieces of legislation, like the World Trade Organization, telecommunications deregulation, and welfare reform. The prevailing preference of the country at the time was for smaller government and less regulation, a continuation of the trend that began during Carter’s years in power two decades earlier.

Today, the prevailing mood of the country has shifted dramatically. The most popular Republicans and Democrats oppose free trade in favor of protectionism. Both want to crack down on “big tech” and impose their respective wills on social media. Both support “infrastructure investment,” even if both parties have their own definitions of “infrastructure.” And there is virtually no gap between the two parties on Russia and China policy.

And yet, so visceral is the mutual disdain between the two cultural poles that it seems their fight has become self-sustaining and -reinforcing. Cultural conservatives and liberals seem not to even need a reason to hate each other anymore, other than the dynamics of Red Team vs. Blue Team.

In other words, the political divide is mostly a function of cultural identity rather than philosophical or policy preferences. What makes it a new culture war is primarily the severity of the cultural polarization. But what–other than social pressures from family and peers–is pushing America’s two competing cultural identities further and further apart?

American cultural identity today can be broken down into two competing and increasingly polarized sets of values. We’ll call them “hometown values” and “cosmopolitan values.”

Hometown values are defined by respect for

However, this list needs to be qualified, because the commitment to these values in a vacuum varies widely. While some are deeply religious, for example, many are not personally religious but rather respect Christianity and nominally identify as Christian because the faith is an integral part of America’s history and tradition. As Shadi Hamid observes in The Atlantic, cultural conservatism “doesn’t require being religious as much as it requires a recognition that religion is a vital societal good, regardless of whether it’s true.”

Much the same could be said for the other culturally conservative values, which tend to be more reactionary than philosophical. That is, adherence to these values stems primarily from opposition to cultural progressivism, not as a matter of principle. Commitment to law and order derives largely from opposition to the Left’s instinctive distrust of police, who they accuse of racial bias. And there are few hard and fast gender role norms held by most cultural conservatives, but they reflexively defend gender traditionalism because of the Left’s aggressive deconstruction of it.

On the other side, we see Cosmopolitan values:

This last value is based on the ideas of philosopher John Rawls, who argued that justice requires not only equal treatment under the law (a classical liberal egalitarian value), but also actively remedying wrongs committed in the past against groups of people—what some call “equalitarianism,” or a redefinition of the word “equity” instead of equality.

Though academia and the corporate press have long been left-leaning, cultural conservatism has enjoyed a position of moral normativity for most of the nation’s history. In other words, the tacit understanding across most of the country has been that culturally conservative values are preeminent, and all who reject these values must explain themselves.

But over the past few decades, moral normativity has shifted from Right to Left. Academia and corporate America are thoroughly dominated by Cosmopolitan values, while the news media has become politically bifurcated such that most members of the media are freer to lean into their cultural progressivism than ever before. Almost everywhere, it is now culturally progressive values that are preeminent and accepted without explanation, and those who reject those values feel the need to explain themselves.

Gone are the days of the culturally conservative “Moral Majority.” Now the Right feels itself to be the embattled and besieged Moral Minority. This goes a long way in explaining its reactionary turn in recent times.

Notice that I label culturally conservative values “Hometown,” represented by the life priorities found in country music, while “Cosmopolitan” obviously signifies the sort of values found among city dwellers. It has been well known for quite a while that urban areas of the country are more liberal and rural areas more conservative. Democrats tend to live near urban cores, while Republicans tend to live further out from urban areas.

An important issue to highlight is that even among members of the same party, values differ between urban and rural areas. Urban Republicans are more positive toward immigrants and more tolerant about gay marriage than rural Republicans, while rural Democrats are less concern about LGBT rights and more family-oriented than urban Democrats.

It is interesting to note that when Ted Cruz and Donald Trump were the two final presidential candidates remaining on the Republican side in 2016, Cruz attacked Trump as having “New York values” – an obvious overture to rural America’s loathing of urban America.

Some researchers posit that the primary reason why this geographic divide is widening pertains to relative economic performance in urban and rural areas. While urban areas offer more and better jobs for those educated in a largely Cosmopolitan university system, globalization is a more distant phenomenon for less educated rural areas. Interestingly, the Brookings Institute pointed out that Biden-voting counties in 2020 represent 70% of the nation’s economic output. While this can explain why the Republican party has shifted more toward economic populism, it doesn’t explain why rural voters have shifted more toward the GOP. After all, Democrats offer similar economic policies as the Republican populists do, as discussed previously.

The fundamental reason why rural voters can’t stomach Democrats is not economics but culture. Consider, for instance, that the rural counties Biden won in Southern states feature more economic distress than the average rural state. What distinguishes one rural area from another? Primarily: culture. Secondarily: race and other politicized identities.

Economic distress is not enough on its own to sway voters. Social and cultural factors are stronger.

Renewing Our Minds And Resisting The New American Culture War

Was Jesus a cultural conservative or a cultural liberal? Did he exhibit the “Hometown values” of Nazareth or the “Cosmopolitan values” of Jerusalem/Rome?

The answer can be both. He appears to be more culturally liberal when he ate with sinners and treated women with more respect than first century Jewish culture afforded them. But Jesus also appears more culturally conservative when he claims to fulfill the law and traditions and delivers his message first to the people of Israel (you might say Jesus had an “Israel First” policy). Truthfully, though, Jesus forged his own unique culture with its own set of values. Likewise, the Apostle Paul adapted to others’ culture in order to spread the gospel more effectively: “I have become all things to all people, that by all means I might save some” (1 Cor. 9:20-22).

The lure of the culture war vortex is a strong one for many Americans, including Christians. Urban and rural Christians alike are susceptible to allowing their values to be shaped by the predominant culture in which they live. But as Paul urged in Romans 12:2:

“Do not be conformed to this world, but be transformed by the renewal of your mind, that by testing you may discern what is the will of God, what is good and acceptable and perfect.”

We are called to be countercultural in whatever ways necessary to display the culture of God’s Kingdom, characterized by the fruits of the Spirit and by Christ’s example. When we do so, we should find that we are not only more loving and joyful but also that we are able to think and communicate more clearly about politics and culture to the world we are called to be its salt and its light.