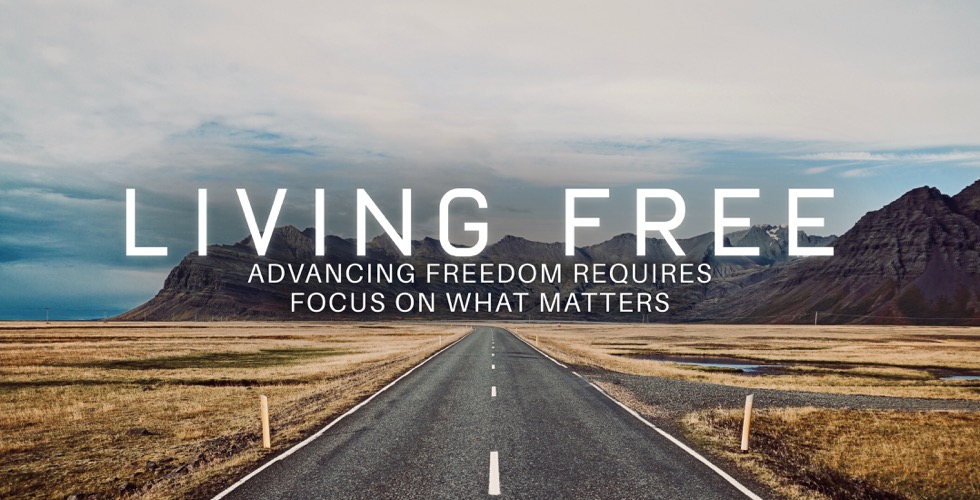 I love to argue with people over ideas. Whether online or in person, I get a particular satisfaction in seeing reactions to my sometimes provocative assertions, and there is a certain pleasure in frustrating the best arguments of another’s side with my own (I am sure I do this less often than I’d like to). However, advancing freedom means focusing on what matters.

You may not be like me in that way, though if you’re a libertarian, you probably have some embattled energy within you just waiting to be unleashed. Some personality types avoid conflict, and others tend to attract it or even pursue it. It comes naturally to some of us, whether because we hate dancing around issues out of concern for social etiquette, or we simply thrive on being provocative or engaging.

During the pandemic, we witnessed the gamut of different personality types react differently to stay-at-home mandates, social distancing restrictions, mask guidance, and now vaccine policies. Advancing freedom and truth involves a tremendous amount of effort, simply because we are being heavily inundated with data we have to gather, comprehend, and apply or discard.

No wonder we’re exhausted! We spend our limited time battling against one particular viral strain of misinformation, only to see this bad data mutate and spawn into a new family of bad information. Maintaining our sanity is a major feat when we’re constantly bombarded from all sides.

If there were one thing my younger self would have never predicted, it would be that my affinity for argument with others would wane over time. Yes, I am sometimes a keyboard warrior who stays up way past my bedtime because “somebody on the Internet is wrong.” But I’ve simply learned how to pick my battles. It has taken some years of honing, but over time I developed a habit of filtering out what is worth spending my time on, and without guilt!

There is a reason why picking our battles is a wise strategy for advancing freedom: time is scarce, and the demands for our attention is a force to be reckoned with. How we steward our time will make or break our capacity as human beings to live well.

While there are some superheroes among us who can be Mom-of-the-Year while achieving two doctorates, birthing triplets, and producing a reality TV show, most of us are stuck with limited capacity. So we need some direction, and the following guidelines work fairly well for me:

Focus on What Matters

1. Advancing freedom means accepting that not every fight is yours to fight

Just because you have a strong defensible opinion that is moderately persuasive does not mean you must take up the fight. The core of this insight is we have to discern whether or not we are skilled or developed in a particular area that needs to be fought. For example, when my leftist economist friends post charts and memes about inequality, I rarely engage (except yesterday because I couldn’t help myself!). Why?

Because I am not skilled in data analysis enough to discredit the contents of the chart or meme in question. I also happen to know from experience that arguing online rarely changes one’s mind. I have saved days of my life, if not weeks, by just scrolling past, knowing that even if I did engage, there was a very low chance of my changing anybody’s mind, anyway. On the other hand, if my rightist friends post anti-immigrant memes, I have a pretty clear sense of how to dismantle their prejudices and misinformation.

To properly fight for liberty in a productive way, we need to each find our own unique role in advancing freedom. I have learned over the years to simply not engage in a battle I know I’m not prepared for, or that is not a particular strength of mine.

2. Advancing freedom means finding out who you can influence and focus on them

You cannot personally convince the President to lower taxes, bring the troops home, or end the Fed. Alexandria Ocasio-Cortez is not going to read your Twitter reply that she’s an economic illiterate. You can angry react to your governor’s Facebook post, but she won’t see it, nor does she care.

To be sure, there are a few positive externalities in replying to Presidential tweets or exposing a Congresswoman’s idiocy in a silly meme, but these are not where your real influence can matter. If you want to put your energy to good use, figure out who you can influence and how to do it.

There’s a marked difference between arguing with your childhood friend posting woke memes on social media that mock the fragility of white people and attending your local school board meeting because your kids are about to be indoctrinated in Critical Theory Praxis. While you could hone your rhetorical skills against him online, the real fight is at your local school board.

Even if you have built little rapport with the parents around you, your courage to stand up against wokeness will inspire others to do so as well. Your friend on social media will likely remain unconvinced. One of the ways your influence matters is to take inventory of your own life.

If you are a veteran who is now anti-war, you’ll be far more influential than I am, having not experienced war myself, and therefore not having the stigma of being considered “unpatriotic” by simply being anti-war. If you are a pro-life woman, you’re far more likely to influence pro-choicers than I am because, well… biology? Use your specific life experiences to your advantage, and wisely influence those willing to listen.

Before moving to the final principle, it should be noted here that specialization works for intellectual movements just as it does in markets. When you go to work to focus on what you do well, you have been conditioned to implicitly trust that other people are going to work to do what they do best, and we all end up benefiting together. The same applies to the liberty movement, and we should take pride in knowing others are also fighting the good fight on different battlefronts.

3. Advancing freedom means your life is a greater testimony than your arguments

Every parent knows that kids mimic their parents before they can even begin to understand what their parents are saying with language. That is, living a life of freedom and integrity will speak volumes to others who might not otherwise listen to what you have to say. This is often not an appealing form of action, because it takes a long view of change, and is not immediately rewarding in the way that activism might appear to be (“We protested the war at the Capitol!”).

Yet there is a profound and lasting effect on others when we choose to live a life worthy of freedom alongside our advocacy for it. But even though a tree that takes decades to grow to its average size, it does show growth and bear fruit along the way. We can choose the long path while also giving ourselves to causes and activities that enhance the lives of others and helps them to live free and flourish.

Whether it is housing refugees, redirecting your business to offer services to those on the margins, or coaching our kids’ soccer league, we all can choose ways to influence others for the common good in a way that promotes freedom and enables flourishing. You do not have to do all three to be a lover of liberty. We can each choose to live in freedom and together and will flourish as we influence the world.

Advancing freedom for the purpose of flourishing requires the sound articulation of intelligent and well-thought out ideas, but it is not political positions but people we care about most. At the end of the day, we must not miss the importance of influencing others with an exemplary life.

Did you like Living Free: Advancing Freedom Requires Focus on What Matters?
You may also like These Posts: