Of Pilgrims and Communism 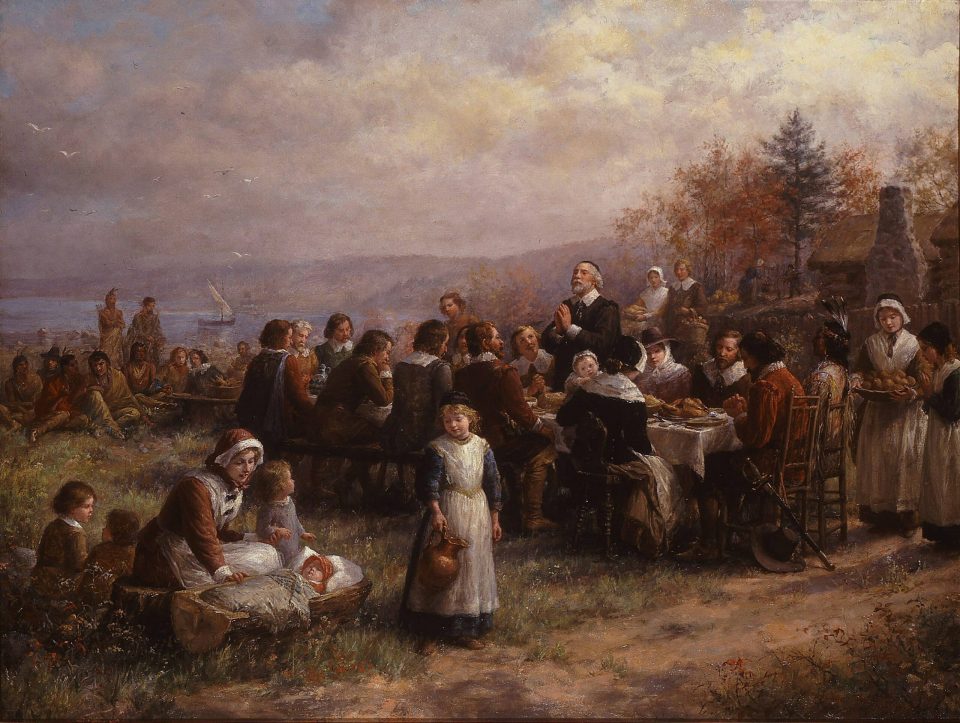 As people in the United States celebrate Thanksgiving this week, we rightly express gratitude for the divine providence that sustains all of us. The iconography of this American holiday is made up of capotain hats and turkeys and other images associated with the English pilgrims at Plymouth and their Native benefactors. Since the first official observance of the national holiday in 1789, schoolchildren have learned a story of sickness, starvation, friendship, charity, and gratitude.

The story of the desperate state of Plymouth Plantation in its early years is related in detail by colonial governor William Bradford in his journal, Of Plimouth Plantation. He describes the political conditions that led to his group’s departure from England, the hardships of exposure in harsh weather, disease, and scarce food, and the heroics of some of their company in aiding the sick and dying.

In two or three months’ time half of their company died, partly owing to the severity of the winter, especially during January and February, and the want of houses and other comforts; partly to scurvy and other diseases, which their long voyage and their incommodious quarters had brought upon them. Of all the hundred odd persons, scarcely fifty remained, and sometimes two or three persons died in a day. In the times of worst distress, there were but six or seven sound persons, who, in their great commendation be it spoken, spared no pains night or day, but with great toil and at the risk of their own health, fetched wood, made fires, prepared food for the sick, made their beds, washed their infected clothes, dressed and undressed them; in a word did all the homely and necessary services for them which dainty and queasy stomachs cannot endure to hear mentioned; and all this they did willingly and cheerfully, without the least grudging, showing their love to the friends and brethren; a rare example, and worthy to be remembered.

Two of these seven were Mr. William Brewster, their reverend elder, and Myles Standish, their captain and military commander, to whom myself and many others were much beholden in our low and sick condition. And yet the Lord so upheld these men, that in this general calamity they were not at all infected with sickness. And what I have said of these few, I should say of many others who died in this general visitation, and others yet living, that while they had health or strength, they forsook none that had need of them. I doubt not that their recompense is with the Lord.

Bradford also describes the strained relationship with local natives and the surprise of generous assistance from Samoset and Tisquantum (a.k.a., “Squanto”). Squanto helped the English immigrants to understand how to plant corn and how to catch quantities of fish sufficient for use as food and fertilizer.

The settlers, as many as were able, then began to plant their corn, in which service Squanto stood them in good stead, showing them how to plant it and cultivate it. He also told them that unless they got fish to manure this exhausted old soil, it would come to nothing, and he showed them that in the middle of April plenty of fish would come up the brook by which they had begun to build, and taught them how to catch it, and where to get other necessary provisions; all of which they found to be true by experience. They sowed some English seed, but it came to no good, either because of the badness of the seed or the lateness of the season or some other defect.

Bradford’s account informs us that the colony was not merely an exercise of religious conviction but also an experimental community which largely abolished private ownership and dictated that most property — including farmland and food — would be held in common for a period of seven years. This community property arrangement was a plan insisted upon by the principal investors in the Plymouth colony, the Company of Merchant Adventurers of London, which also insisted that there was to be no individual trade.

Early harvests, aided by the local expertise the pilgrims had received, were modestly successful.

They began now to gather in the small harvest they had, and to prepare their houses for the winter, being well recovered in health and strength, and plentifully provisioned; for while some had been thus occupied in fishing for cod, bass, and other fish, of which they caught a good quantity, every family having their portion. All the summer there was no want. And now, as winter approached, wild fowl began to arrive, of which there were plenty when they came here first, though afterwards they became more scarce. As well as wild fowl, they got abundance of wild turkeys, besides venison, etc. Each person had about a peck of meal a week, or now, since harvest, Indian corn in that proportion; and afterwards many wrote at length about their plenty to their friends in England — not feigned, but true reports.

Despite their newly acquired know-how and abundant natural resources, by 1623, supplies were again running short. Disagreements with their investors and challenges in the fur trade made it harder for the residents of Plymouth to obtain food through trade to supplement their local harvests. These challenges ultimately caused the colonists to abandon elements of their economic experiment. They turned away from the communal farm arrangement and instead divided farm lands among the families, guaranteeing each family the fruits of its own labor.

All this while no supplies were heard of, nor did they know when they might expect any. So they began to consider how to raise more corn, and obtain a better crop than they had done, so that they might not continue to endure the misery of want. At length after much debate, the Governor, with the advice of the chief among them, allowed each man to plant corn for his own household, and to trust to themselves for that; in all other things to go on in the general way as before. So every family was assigned a parcel of land, according to the proportion of their number with that in view — for present purposes only, and making no division for inheritance — all boys and children being included under some family. This was very successful. It made all hands very industrious, so that much more corn was planted than otherwise would have been by any means the Governor or any other could devise, and saved him a great deal of trouble, and gave far better satisfaction. The women now went willingly into the field, and took their little ones with them to plant corn, while before they would allege weakness and inability; and to have compelled them would have been thought great tyranny and oppression.

The failure of this experiment of communal service, which was tried for several years, and by good and honest men proves the emptiness of the theory of Plato and other ancients, applauded by some of later times — that the taking away of private property, by a commonwealth, would make a state happy and flourishing; as if they were wiser than God. For in this instance, community of property (so far as it went) was found to breed much confusion and discontent, and retard much employment, which would have been to the general benefit and comfort. For the young men who were most able and fit for service objected to being forced to spend their time and strength working for other men’s wives and children, without any recompense. The strong man or the resourceful man had no more share of food, clothes, etc., than the weak man who was not able to do a quarter the other could. This was thought injustice. The aged and graver men, who were ranked and equalized in labour, food, clothes, etc., with the humbler and younger ones, thought it some indignity and disrespect to them. As for men’s wives who were obliged to do service for other men, such as cooking, washing their clothes, etc., they considered it a kind of slavery, and many husbands would not brook it. […] Let none argue that this is due to human failing, rather than to this communistic plan of life in itself. I answer, seeing that all men have this failing in them, that God in His wisdom saw that another plan of life was fitter for them.

In his 1951 book Socialism, the Austrian economist Ludwig von Mises made the case that socialism fails because market prices are necessary for rational economic decision-making. The flaw in all state central planning is not insufficient virtue on the part of the central planners but rather the inherent impossibility of the socialist calculus.

Socialism is the renunciation of rational economy. […] The impracticability of Socialism is the result of intellectual, not moral, incapacity […] Even angels, if they were endowed only with human reason, could not form a socialistic community.

Bradford’s characterization of liberty and private property as God’s divine plan for mankind in a fallen world was also echoed in the words of the great French Liberal, Frederic Bastiat, in the closing lines of his short work The Law:

God has given to men all that is necessary for them to accomplish their destinies. He has provided a social form as well as a human form. And these social organs of persons are so constituted that they will develop themselves harmoniously in the clean air of liberty. Away, then, with quacks and organizers! A way with their rings, chains, hooks, and pincers! Away with their artificial systems! Away with the whims of governmental administrators, their socialized projects, their centralization, their tariffs, their government schools, their state religions, their free credit, their bank monopolies, their regulations, their restrictions, their equalization by taxation, and their pious moralizations!

And now that the legislators and do-gooders have so futilely inflicted so many systems upon society, may they finally end where they should have begun: May they reject all systems, and try liberty; for liberty is an acknowledgment of faith in God and His works.

As we celebrate Thanksgiving, we should remember that it is God to whom our gratitude is owed for the food that we eat and the clothes that we wear and the houses that we live in. But we should also remember that God has not often seen fit to provide these material things through direct, miraculous intervention. He has instead taught us how to live in a way that shows love to our neighbors and provides for our everyday needs. For that divine plan we should be truly thankful.

(Note: Quotations from Bradford’s Of Plimouth Plantation are taken from Harold Paget’s 1909 translation, Bradford’s History of the Plymouth Settlement.) 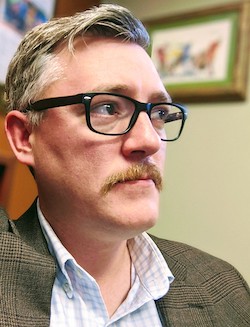 Dick Clark is a committee legal counsel for the Nebraska Legislature and an attorney in private practice specializing in firearms law. Besides faith, family, and work, Dick enjoys shooting, hunting, playing violin, mandolin, and guitar, and finding time for woodworking in his workshop.
All Posts
About Articles on LCI LCI posts articles representing a broad range of views from authors who identify as both Christian and libertarian. Of course, not everyone will agree with every article, and not every article represents an official position from LCI. Please direct any inquiries regarding the specifics of the article to the author.