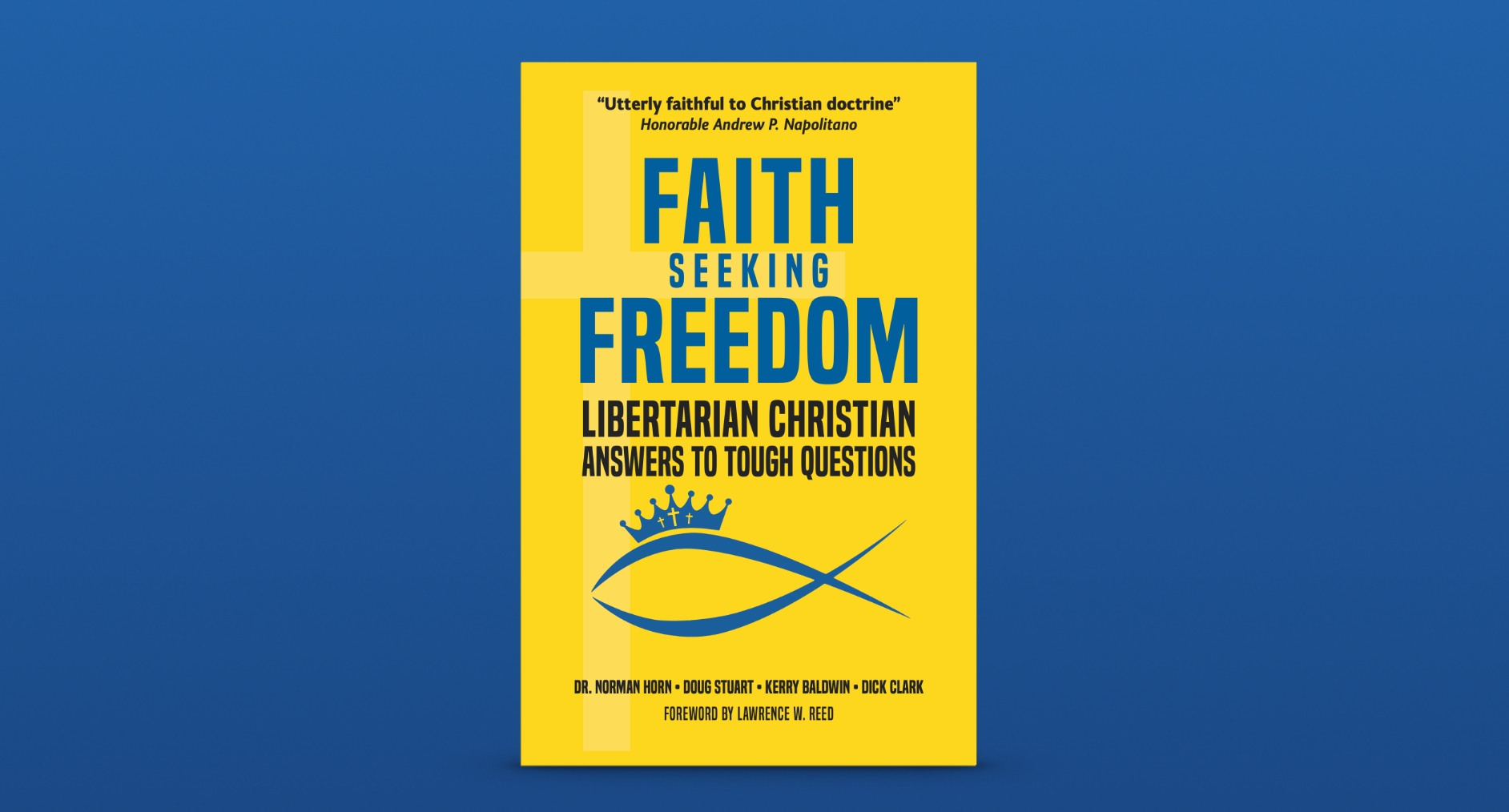 The human heart has a natural orientation toward liberty. We are built this way, regardless of our religion or ethnicity; indeed, all men are endowed with liberty and a deep desire for it.
– Rev. Robert A. Sirico

Despite the accelerating rate of innovation and progress humans have made in recent centuries, we have yet to defeat our inner desire to conquer and dominate one another. Read the latest newspaper headline, watch half a news segment, or scroll for five seconds through a social media feed, and you will find ample evidence of the human yearning to control the lives of others. From your acquaintances on social media to the highest offices in the country, the yearning for power is evident. Lawmakers enact policies that manipulate the economic playing field to favor themselves or their friends. Law enforcement agents zealously use overwhelming force to stop minor infractions. Governors promise citizens that if they would just obey orders, their problems will soon be healed. To see these emerging social patterns takes stepping back and critically assessing what’s happening, but it is visible to all who care to see it.

To make matters even more complicated, the corporate press and competing institutions exacerbate our social conflicts by weaving narratives that leave us tangled in confusion. We are inundated with demands to take a side and stake our claim to power, or else be canceled for not standing up for what the other side says is right. Standing up for truth has become all about rising up to grasp power.

Christians in America have also fallen prey to this phenomenon, seeking status, privilege, and power from an institution that the Church has historically viewed with suspicion. It is as though we have forgotten Jesus’ words to his disciples in Matthew 20: “You know that the rulers of the Gentiles lord it over them, and their great ones are tyrants over them. It will not be so among you; but whoever wishes to be great among you must be your servant, and whoever wishes to be first among you must be your slave.” Even the American founding myth of distrust of the state has been abandoned for the pursuit of absolute power and dominance. Both Christians and non-Christians have become re-enchanted by the allure of empire. The days when it was patriotic to question your government seem like a bygone era. Worse yet, many Christians have lost the ability to think straightforwardly about the world without importing an agenda driven by the desire for political power. As Brian Zahnd says repeatedly, the world is “addicted to solving its problems through violence,” but the cross “demands that we renounce violence as a means of achieving just ends.” A truly Christian political philosophy includes embracing just means toward just ends, and violence is never the answer.

This lost habit of thinking about politics in a Christian way must be recovered. The biblical prophets preached against the evils of empire, and the Messiah declared his supremacy over the kingdoms of this world. Today, Christians need to model those examples and herald the good news that speaks truth to power.

This prophetic voice against empire should incline us, as Christians, toward promoting individual liberty, free markets, and non-aggression. Empire wants to subsume our human agency, robbing each of us of our dignity as image-bearers of God. We wrote this book because we believe the growing threat of empire is a battle worth fighting, and we fight against it by arming ourselves with clear, compelling, and (when possible) concise answers to tough questions.

To be clear, we wage battle not by wielding any kind of physical violence or threats of violence, but with words. As the Apostle Paul wrote, our struggle “is not against enemies of blood and flesh, but against the rulers, against the authorities, against the cosmic powers of this present darkness, against the spiritual forces of evil in the heavenly places” (Eph. 6:12). Our fight is not with people but with ideas, and so we must endeavor to “destroy arguments and every proud obstacle raised up against the knowledge of god, and we take every thought captive to obey Christ” (2 Cor. 10:4-5).

In any battle, a strong defense is necessary to win. We take seriously what Peter wrote in 1 Peter 3:15: “Always be ready to make your defense to anyone who demands from you an accounting for the hope that is in you.” It is in Jesus Christ (not worldly powers such as the state) we find our hope. It is to Christ, not Caesar, we pledge our allegiance.

In the past decade or so, many Christians have affirmed what we believe about libertarianism: it is the modern political philosophy most consistent with the Christian faith. If you count yourself among us libertarian Christians (or close to it), we hope that this book will arm you with strong answers to questions. This is not a light endeavor. Convincing others that your political beliefs are the best way to think about the world is always challenging. Very rarely are people convinced by the mere articulation of a viewpoint. Objections must be dealt with and questions must be answered. Sometimes those answers are not wholly satisfying, but are enough to keep one searching and seeking. And if you are the one who is asked the questions, you want to be equipped with clear, concise answers that are convincing enough to move the conversation forward.

A word of caution is necessary, as well. While the battle of ideas rages on, we must always remember we are conversing with human beings whose minds can be changed. Being equipped with solid answers will help, but answers alone are not the solution. Our approach must always be seasoned with empathy, love, and respect for those who ask us questions. We must learn from their questions, both to understand their side better and to sharpen our answers for them. So while we wrote this book to help readers deal with an important aspect of the conversation, it is up to them to listen and respond in grace and with respect.

We wrote Faith Seeking Freedom with a dual purpose. If you are a libertarian Christian, we hope this book equips you with solid responses to the common objections so you can be better equipped to make the Christian case for a free society. If you are a non-libertarian seeking answers to the tough questions about politics, we hope this book will get you started on a journey that leads you to a greater understanding of the libertarian Christian perspective, and perhaps even convinces you to join us!

We want this book to be as clear and concise as possible while also being conversational in tone. The questions are grouped together into chapters topically, and those topics have been organized to represent a basic flow of a conversation. We recommend reading from beginning to end, but readers who choose to jump around will not lose much, if anything.

Each chapter ends with Further Reading, a curated list of books, articles, and other resources to learn more about the topics within that chapter. Of course, we do not endorse everything said by every author, but they provide a solid range of libertarian and Christian works, some of which have been highly regarded for many decades. You can also view the full reading list here.

Each contributor to this book has their own set of beliefs and opinions about politics and theology while also adhering to the historic Christian faith as proclaimed since the first century. Libertarian thought exists on a spectrum, and so the authors will answer these questions from varying places along that spectrum. However, we all agree on the fundamental aspects of the libertarian creed and the broad outlines of what a free society looks like. Of course, like most libertarians, we enjoy arguing together over the particulars. What is important for the purposes of this book is that we all advocate for consistent application of individual liberty in every possible circumstance.

Lastly, we must note that, while we spend a great deal of energy defending a free society from a Christian perspective, none of these authors believe that libertarianism is the ultimate hope for our world. We firmly believe a free society with peaceful exchange is best, but the ultimate hope for humanity comes only from God through the saving work of Jesus Christ. Let us never forget that, “Salvation belongs to our God who is seated on the throne, and to the Lamb” (Rev. 7:10). To God be the glory, as we seek to honor him even in our political ideas.

Did you like Recovering Christianity’s Lost Habit of Thinking about Politics?
You may also like These Posts: