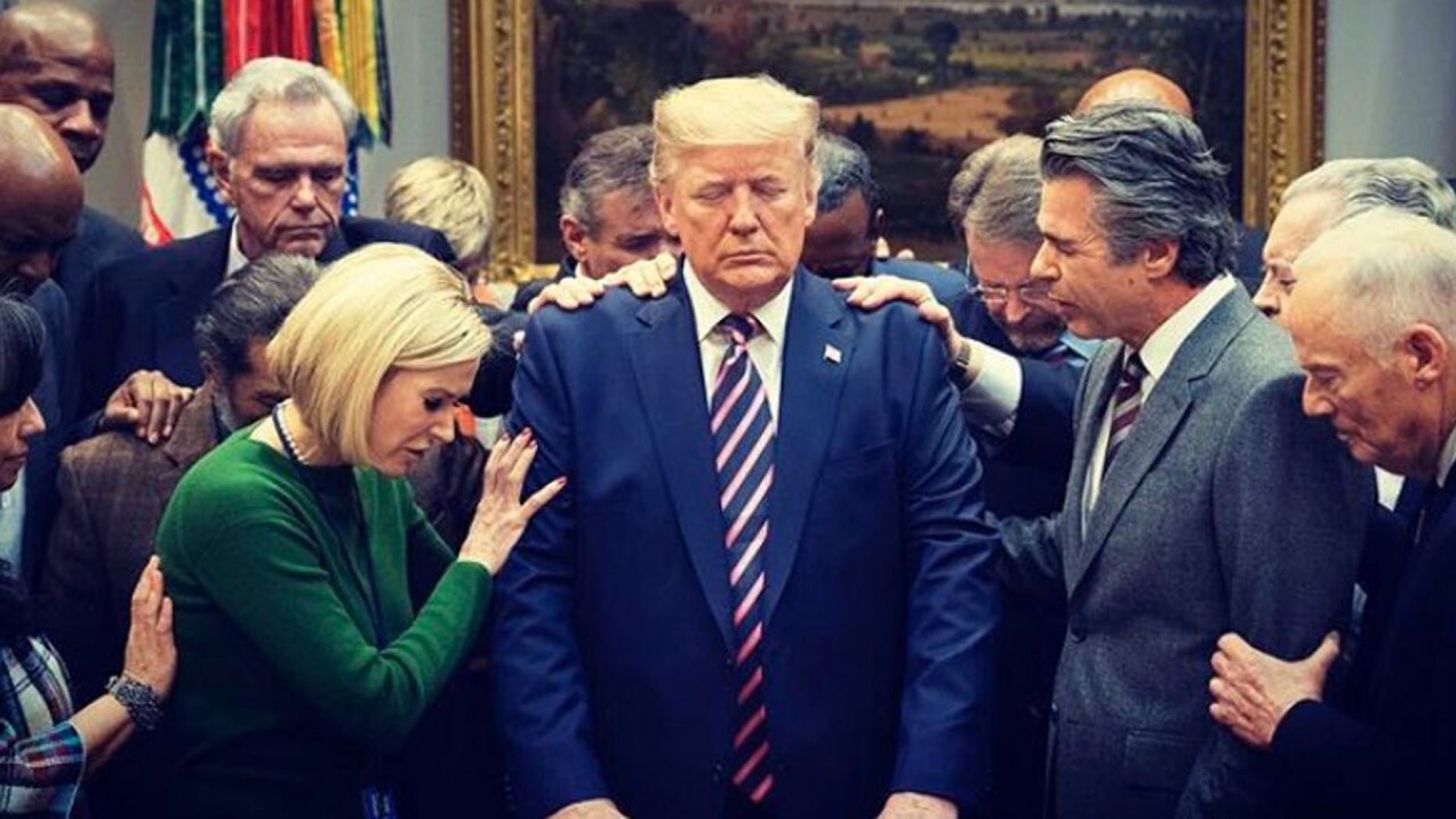 “We cannot allow our country to be deprived of the Judeo-Christian values that make it so great.”

That is the statement printed on the front of the envelope of a mailer I received recently. It came from an organization called Pray In Jesus’ Name Ministries, and it fits perfectly with the trend of cultural identity increasingly shaping American Christians’ politics I’ve written about previously.

“Dear Christian Patriot,” the enclosed letter begins. In the middle of the page, in big, bold letters, is written, “In God We Trust.”

I know you’re not afraid to say that out loud.

Neither is my good friend, Dr. Ben Carson [to whom the opening quotation is attributed]. After all, you and I both know that God has blessed this nation and blesses those who trust in Him.

But for the previous eight years we have had a President who was – and still is – ashamed of those words.

A President who said he believes we are no longer a Christian nation.

The letter then goes on to cite multiple instances of military members being reprimanded or relieved of duty for some sort of offense based on their Christian faith. Most instances concern a chaplain or officer being punished for speaking their mind about homosexuality.

Now, I do not know the details of any of these cases, and indeed it may be true that there were some egregious violations of religious liberty. But my reason for mentioning this unsolicited letter I received in the mail is to make a point about conservatism. There are two conservatisms in America today that are in some ways distinct but in other ways simply two sides of the same coin. There’s principled conservatism and then there’s cultural conservatism.

For libertarians such as myself, it might be tempting to think that it’s not worth wasting time trying to understand the nuances of contemporary American conservatism. I disagree, for two reasons. First, as I’ll discuss below, principled conservatism can be libertarianism’s ally in American politics. (Keep in mind, we’re talking about decent people like Rand Paul, Thomas Massie, and Justin Amash, not strictly speaking “the Republican Party”.) And second, as libertarian Christians, we must remember that many of our fellow American believers are political conservatives. Finding common ground is a good way to begin sharing our own values.

The core values of principled conservatism are small government, free markets, fiscal responsibility, individual responsibility, traditional Judeo-Christian morality, patriotism, respect for the military, and spreading democratic capitalism around the world. Some of these values, such as spreading capitalism around the world through foreign wars, libertarians clearly would not accept. Others might be benign on the surface, but libertarians would strongly disagree with conservatives about how to apply them.

Traditional Judeo-Christian values might be good (Christian libertarians like me would certainly say that they are), but libertarians argue that they should not be enforced or favored by government. Patriotism? Yes to an extent, say libertarians, as there are many admirable traits of America. Respect for military? Military members can display praiseworthy characteristics, but libertarians rightly hold great skepticism toward militarism in general. Christians, of course, should be wary of military force as the vehicle to empire and anti-God tyranny. Ultimately, Christian libertarians believe conservatives take these values too far in unconditionally defending and heaping uncritical praise on nation and military. “Spreading democratic capitalism around the world” can somewhat be interpreted in a libertarian way, if carried out through trade and diplomacy rather than interventionism. (Even Ron Paul said we should can export our values through peace, commerce and honest friendship.)

In short, there’s a reason that Ronald Reagan said that “the very heart and soul of conservatism is libertarianism.” The two, while certainly not identical, can become natural allies at times.

What is not a natural ally of libertarianism is cultural conservatism. The traits of cultural conservatism are not easy to describe succinctly because they are based on a certain culture within America. But, in general, it’s fair to say that adherents of this view care more about advancing their cultural and social views than to promoting the values listed above.

Cultural conservatism shares many if not most of the same political views and values as principled conservatism, but their priorities are very different. Especially as conservative cultural influence has waned, they increasingly want a cultural champion to fight for them. They want someone to punch back at the biased liberal media. They want someone to complain on their behalf about football players kneeling during the national anthem, transgender people using the bathrooms opposite of their biological sex, and the defacing of statues that symbolize Southern pride and the original European immigration to America. They want someone to enforce law and order and publicly criticize Black Lives Matter rather than kowtowing to it. They want a leader to take big, visible steps to curtail the influx of immigrants who look different, speak different languages, and don’t share our culture. They want someone to affirm their deep-seated suspicion of foreigners.

They want someone to conserve (or rather reinstate) the white Anglo-Saxon Protestant culture of yore. They want someone to vocally and unabashedly air their grievances. Maybe they do care, in the back of their minds, about small government, fixing the national debt, promoting economic growth, and spreading democratic capitalism around the world. At least, most of them do. But they care more about sticking it to the liberals who have been winning the culture war and who, they feel, have badly mistreated them.

Trump has called the liberal cultural revolution a “merciless campaign to wipe out our history, defame our heroes, erase our values, and indoctrinate our children.” Perhaps, to cultural conservatives, there’s no hope of enacting the values of principled conservatism unless cultural conservatism wins the political tug-of-war match first. But I tend to believe that this isn’t really the way they think. I tend to believe that the urge to suppress the rising tide of cultural liberalism and win the culture war is the highest goal.

Another way of delineating conservatism right now is to distinguish between Trump diehards, Trump sympathizers, and reluctant Trump allies. The latter two groups make up the majority of Republicans, but effectively this distinction doesn’t matter. The cultural conservatism vs. principled conservatism dichotomy still holds true. Trump sympathizers and reluctant allies may roll their eyes and shake their heads at some of the things Trump says and does, but listening to the Democrats and liberal media spurs them to instinctively ignore, downplay, or defend those very same foibles of Trump that, deep down, they don’t personally like or approve of.

As Jonah Goldberg says, being “anti-anti-Trump” is the gateway to being pro-Trump. Negative partisanship and “what-aboutism” (reflexively deflecting a legitimate criticism because the other side has likewise done something bad) is enough to minimize non-Trumpy conservatives’ qualms and institute party loyalty.

For Christian conservatives, specifically, the culture war is not just a priority but an existential issue, which is why evangelical loyalty to Trump is so strong. Recall the quote from Dr. Ben Carson: “We cannot allow our country to be deprived of the Judeo-Christian values that make it so great.”

Here’s the problem: The more Christians try to reclaim our cultural dominance in America through politics, and indeed the more we succeed in that endeavor, the more our propensity toward winsomeness, persuasion, and outreach atrophy.

Put differently, the more we pour our time, energy, and resources into causes like fighting to ensure the political right for a military chaplain to call homosexuality a sin, by necessity, the less time, energy, and resources are going toward the real Christian nation — God’s Kingdom. The more we focus on political power and cultural dominance, paradoxically, the more we will drive non-believers away from the church and radicalize the Left against us. The more we try to coerce our way back to cultural relevance, the more cultural influence we will lose.

Of course religious liberty — for everyone, not just Christians — is a political value worth standing for, but we believers should set our priorities straight. The right to potentially offend someone with our faith should never come before our desire to persuade them of that faith.