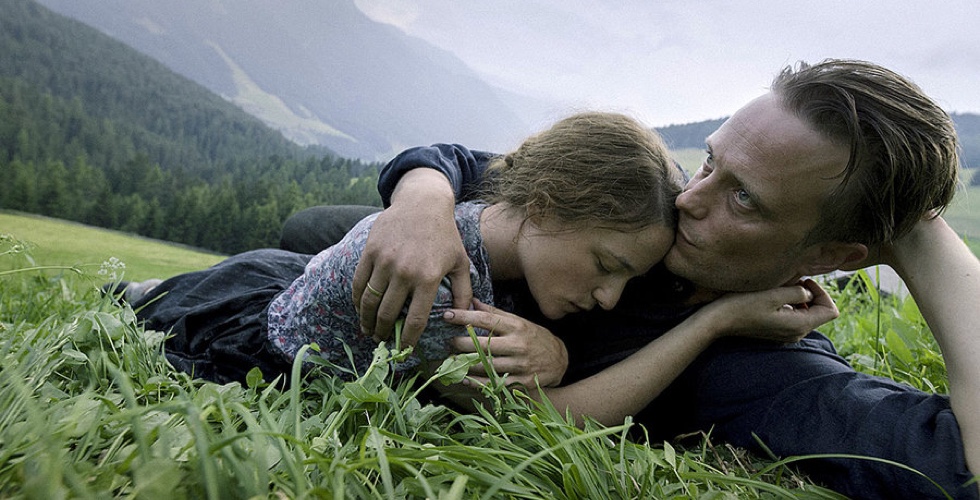 A Hidden Life is legendary director Terrence Malick’s latest film. It tells the true story of Austrian conscientious objector Franz Jägerstätter, his fight against the Nazi regime, and his struggle in the face of persecution. It also provides us some of the most beautiful meditations on beauty, courage, morality, and faith.

At the start of the film, we are shown the scenic beauty of the Austrian countryside, home to Franz and his family, through the sweeping cinematography that is so typical of Malick’s films. We see Franz Jägerstätter and his wife Fani as they work the fields, chat with their neighbors and loved ones, and play with their children, letting us know that the Jägerstätter’s lives are very simple, and yet beautiful and intimate in their simplicity.

Then we see, through newsreel, that Adolph Hitler has become the chancellor of Germany and the Nazis have taken over. The threat of war now looms over Europe. Franz is enlisted into the Army, and there he learns of Germany’s invasion of France and other European countries through propaganda footage. The aggression of his homeland towards its neighbors disillusions him, and finally, the genocidal ideology of Hitler convinces Franz that his country’s leaders have grown truly evil.

Franz must now choose whether to become an active participant in the evils of his country’s government or to refuse and stand his ground. He chooses the latter.

Franz refuses to contribute to the war effort and turns away a group of party members who come to him for donations to the state. He refuses to accept subsidies from the state. This makes him the target of attention. The mayor of his village attempts to talk some ‘sense’ into him, but Franz doesn’t comply; and as a result, he along with his family are persecuted and ostracized. The women of the village even scream at Fani, “Our husbands have gone off to war. Why should they fight to save you?”

When Franz attempts to gain the support of the church, he is met by timidness and a blatant refusal to commit to Christ’s mission. The local priest warns him that dissident priests are sent to concentration camps and church processions are banned by the state. The bishop too is reluctant to commit to Christ and says that Franz’s duty “is to the Fatherland.”

The state of the Church, as depicted in this film, is indeed telling. A neutered church, devoid of courage, is equal to an instrument of satan. A church, failing to act on the word of Christ, is worthy of shame; and worse, by its silence, it makes itself part of the persecution. A church failing to act on its conscience is a church crucifying Christ all over again. As Dietrich Bonhoeffer said:

Silence in the face of evil is itself evil: God will not hold us guiltless. Not to speak is to speak. Not to act is to act.

In one scene, a church painter, as he goes about his livelihood, describes the challenges Christians face in today’s political world. “We create sympathy,” the iconographer says, “We create admirers. We don’t create followers.” What does it mean to ‘follow’ Christ?

There is no way to peace along the way of safety. For peace must be dared, it is itself the great venture and can never be safe. Peace is the opposite of security. To demand guarantees is to want to protect oneself. Peace means giving oneself completely to God’s commandment, wanting no security, but in faith and obedience laying the destiny of the nations in the hand of Almighty God, not trying to direct it for selfish purposes. Battles are won, not with weapons, but with God. They are won where the way leads to the cross.

Whereas the Nazi state, as a precursor to our modern-day war-mongering governments, tried to bring about peace through coercion and persecution of Franz Jägerstätter’s wife and children, Jägerstätter would not do the same. Instead, he would mimic Jesus to point of emulating the Lord’s Passion when faced with the threat of arrest and execution. A follower of Christ voluntarily loses security for himself in the interest of others. Where the worldly rulers demand the sacrifice of the other, the Christ imitator lays down his/her own life for the other.

Sure enough, Franz is arrested for refusing to swear an oath to Hitler. His wife, as a result, is deprived of support and left to fend for herself and her three daughters. During this period, only the love both husband and wife have for each other sustains them. As we hear the correspondence of Franz and Franziska Jägerstätter, we are reminded of the words of the apostle Paul.

For I am persuaded that neither death nor life, nor angels nor principalities nor powers, nor things present nor things to come, nor height nor depth, nor any other created thing, shall be able to separate us from the love of God which is in Christ Jesus our Lord.

Indeed, it is a great mystery that the love which flows from and within the Godhead can manifest itself so powerfully through such simple people.

A Hidden Life, delicately handled in Terence Malick’s hands, beautifully intertwines the threads of courage, love, and self-sacrifice. The radiance of Christ glows from every one of the movie’s frames. It is an inspiring story and something that deserves a lifetime of careful contemplation.

PrevPrevHarm or Aggression: How do Libertarians Establish What is Crime?
NextWhat will prevent mass shootings?Next