Thirteen Signs Caesar Might Be Lord of Your Life 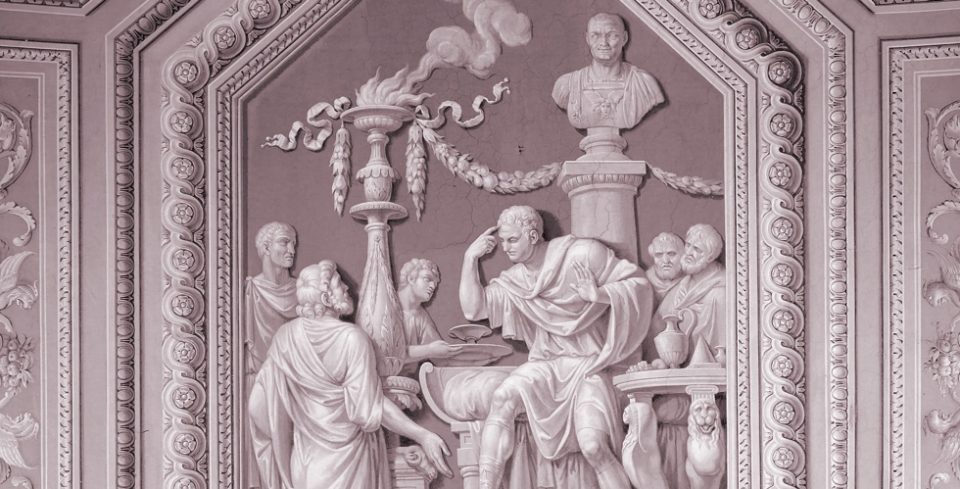 We’ve all heard these quips. And they indicate something powerful – namely, the mass blindness of our present condition and the various “atmospheres” in which we live. Given the amount of energy and time and coverage of the political arena in western 21st century life, would it be any surprise if we found ourselves in a strangely compromised position when it comes to this sphere? One in which we have let Foxnews/CNN, the blogsphere and late night YouTube binges put the state and its political machinations in far too great a position of influence? A position where we cannot even be decent human beings to our neighbor because we’re too embroiled in the latest controversies and triggered from certain, charged words? Where our faith in Christ is simply an afterthought as opposed to being central?

As a kind of haphazard thought-experiment to gauge this unfortunate possibility, here is a list of thirteen signs when Caesar might be Lord of your life. It’s when:

What kind of world is this? How does it come into being?

It reminds me of a fair point made in a recent article in The Atlantic by Jonathan Merritt: we must protect places and spaces of ambiguity in our lives and in the lives of others. If we don’t even have room to think – and don’t let others sort things out and be honest about it, and are always expected to just know, our lives will naturally take on a spirit of superficial certainties. And when those thresholds and litmus tests for orthodoxy (and whatever else) become part of our natural discourse, then it’s habitual to see everything – including political battles – as only a site of truth and lies, winning and losing, competition and war, as opposed to an arena of testing, exploration, uncertainty, and continual development for many individuals. Yes, there are real “battles,” and yes, sometimes God knocks people off their high horse and changes their life, and it’s clear what needs to happen at that point. But most of the time, for most people, it’s a gradual journey of many phases in one direction or another. And when different people are on different journeys, it is simply out of place and unhelpful merely to react.

I immediately challenge Youtube’s algorithms when it suggests a “_____ REACTS to ____”  video or “______ TRIGGERED” video in my feed, and tell it that I’m “Not interested in this” or “stop suggesting videos like this.” I don’t want to see people react to political ideas, and I don’t want to be programmed to react to political ideas. I don’t want to simply react to anything! Reacting is more or less the opposite of cognition. God has given us larger brains and intellects to be used, not suspended on a regular basis. So if we find ourselves committing one of the above “signs,” there might be a very practical, and psychological reason for why we’re guilty as charged: we’re letting the media beast train our habits, thoughts, and inclinations.

But there is always more in the picture, of course – the desire or self-affirmation, for entertainment, to be “on top of things,” and the fact that political discourse is ingrained in the DNA of American society. The Caesar-power-statist game is just what we do in America.  But again, it’s distracting and takes something away from us, like an odd sailor that regularly drinks a little bit of salt water each day thinking it will put him in a better position for the next day.

So don’t get too bent out of shape this Christmas season when all that’s left to do is talk about politics where, well, that probably won’t be very fun. Don’t react. Just listen, facilitate in a gracious way, and ask where people are in their journey – because this alone reveals the disturbing (but important fact) fact that they and we are all on a journey, and not a fixed beacon of eternal political truth.