The Scapegoating of Jordan Peterson 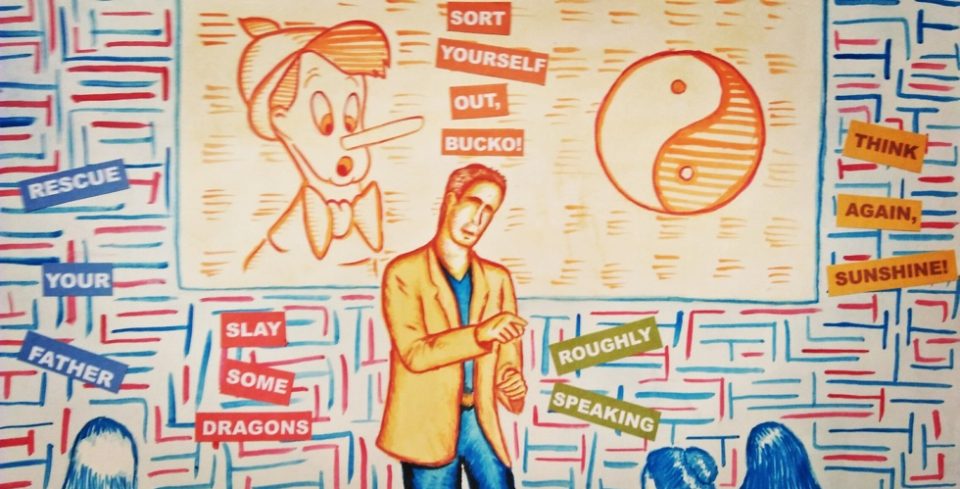 Ever since his interview with Cathy Newman went viral on YouTube, the scapegoating phenomenon that involves Dr. Jordan Peterson keeps getting bigger and bigger. Numerous hit-pieces have emerged from the mainstream media attacking the Canadian; some of them has called Peterson a ‘darling of the Alt-Right’ while others have labelled him ‘transphobic’, ‘homophobic’, or any other ‘phobic’ word there is to find within the narrow vocabulary of the possessed ideologues masquerading as journalists.

The truth is that the misrepresentations and the constant smeering of someone like Jordan Peterson reveals more about his opponents than it does about the professor. For instance, when Peterson stands in opposition to Bill C-16 — laws that are supposed to protect transgender rights in Canada — the radical left tries to box him in a category and file him away into a dark and obscure corner. Jordan Peterson doesn’t agree with the bill’s passing, therefore he must be a white supremacist; such logic is parroted endlessly among media outlets such as Vice and the New York Times.

When Peterson talks to men about taking up responsibility, the naysayers foam at the mouth. The professor tells people that in taking up responsibility they will find meaning that will make their lives worthwhile. In his bestselling book, 12 Rules for Life, Peterson admonishes the reader to “stand up straight with your shoulders back.” He continues: “Walk tall and gaze forthrightly ahead. Dare to be dangerous… People, including yourself, will start to assume that you are competent and able… Thus strengthened and emboldened, you may choose to embrace Being, and work for its furtherance and improvement.”

The professor continues to give out fatherly advice in his many lectures around the world. He tells young men to stop behaving like infants, stop blaming the world, and pull themselves together; and as a result he has received many letters from them describing how he has changed their lives for the better. People walk up to him on the streets and talk about how he has turned their lives around. Relationships have mended and violence averted, and whenever Peterson recounts these stories he almost immediately starts tearing up.

Not so do his opponents in the media. Most recently the editor of the New York Times uttered some of the most racist comments I have ever seen in my life. Yet it bothers ideologues like the New York Times immensely that Jordan Peterson urges his fans to not play the blame game of identity politics and instead address the resent and bitterness within. It is apparent that the New York Times editor wants us to think that a particular group of people are the problem, and therefore, they suggest the elimination of this group would usher in their version of utopia. One is left wondering whether these people have ever seen the real world outside the confines of university life, or even the confines of the cradle.

This shouldn’t be a surprise to us, as the world is filled to the brim with harmless intellectuals who babble endlessly about deconstruction and offer no actual way of living. Such is not the case with Peterson. The Canadian professor of psychology demonstrates his own willingness to speak the truth when he talks about the scientific evidences of gender differences, the disastrous effects of Communism, the importance of religion and myths, and the nihilism of postmodernism, all of which are considered very unpopular in leftist academia circles. Time and again, Peterson echoes the words of Solzhenitsyn and his philosophy to ‘live not by lies.’

Wherever there is groupthink based around the lie of blame shifting, the appearance of a truth teller will undoubtedly stir things up. The hornet’s nest is rattled and the scapegoaters come out of the woodwork with utterances of accusation such as, ‘Oh, you’re a racist, a misogynist’ and whatnot. Incredibly, to such people, speech is violence (though their own accusations are surely harmless!) and actual violence is mere speech.

The good news, however, is that groupthink and murderous ideology are on their way down, and people like Jordan Peterson are rightfully hurrying up the process. Peterson talks much about ’embodying the Logos,’ and he associates this embodying with telling the truth. The method of telling the truth in order to disperse a frenzied scapegoating collective was brought to us by a first century Nazarene called Jesus Christ.

It was the time of Roman occupation. The zealots of those days yearned for a savior who would deliver the Jews from their rulers through violent revolution, and so Jesus’ arrival meant good news. But then Christ started talking about not resisting evil with evil and loving the neighbor. Before an occupied people the Nazarene boldly said, “If a soldier forces you to carry his pack one mile, carry it two miles.” What danger can there be in loving the enemy? Just try for once by urging a diehard Democrat to love Donald Trump; you will wish there was a wall available right then and there.

The result of Christ’s truth telling got him crucified by the hypnotized masses. But the death of the Redeemer prenetrated the minds of many; they knew that he was innocent and he was right. The haunting memory of the crucifixion pricks us to this day, and as a result, we fail at our numerous attempts to scapegoat truth tellers. We fail more and more each time we try. What better illustration is there to the modern reader than the attempted smearing of Jordan Peterson by the progressive intellectuals and journalists of the left?

The kingdom of heaven is like yeast mixed into the dough. In his interview with my friend David Gornoski, Jordan Peterson said that in the west “we got the idea of the sovereign individual right” and “we got the idea of private property right.” These ideas stem from the diminishing of groupthink brought on by Christ. Likewise, the idea of the person standing truthfully against a collective bound by the lie of violence is also an idea from Christ. The anti-crowd truth of Christ is effective because it deals with the persecutor within a person. “The line between good and evil cuts through the heart of every man,” said Solzhenitsyn. Peterson echoes that when he says, “The ultimate serpent in the garden is the spirit of evil.”

“The purpose of the image of Christ is that even the tyrannical king has someone to bend his knee to,” says Peterson. That image, though symbolic in Jungian psychoanalysis, is a very real and hard anthropological fact. In this world of polarization and rivalrous ideologies, we would do well to shun the blame shifting culture that exists today among the vainglorious. Instead, our very existence as a species depends upon our imitation of Christ.

Our very existence depends not in the pursuit and destruction of an external enemy but instead on each of us tending and cultivating our gardens or, as professor Peterson would say, “cleaning our rooms.” The imitation of Christ means exactly this and more; it means to love your neighbor and even your enemy, for love, like hate, is also contagious. Even the smallest act of love can become a game changer in the larger society. Let us then heed the words of Gandalf from Lord of the Rings:

“Saruman believes it is only great power that can hold evil in check, but that is not what I have found. I found it is the small everyday deeds of ordinary folk that keep the darkness at bay… small acts of kindness and love.”