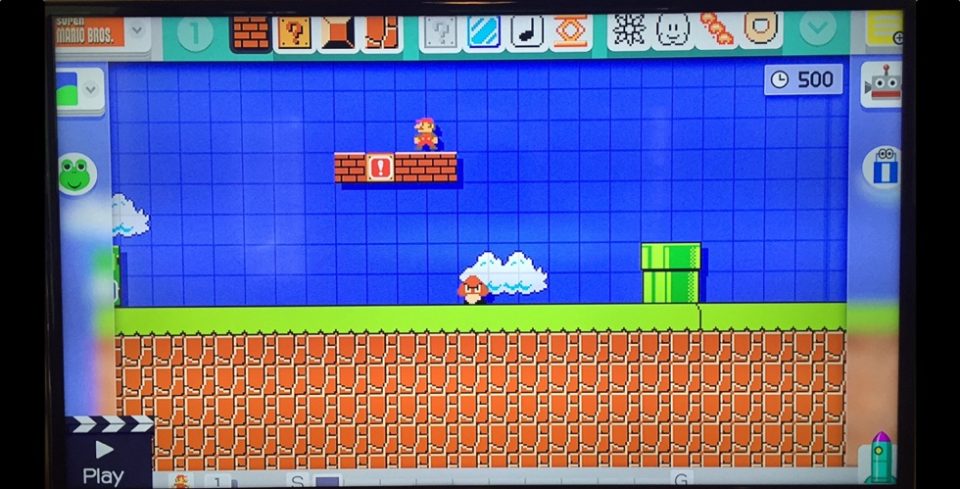 I’m not kidding.  I just watched my kid grasp basic marketing truths that took me years in the professional world to get. (I might be a bit daft, but that’s another story).

I didn’t end up graduating with a major in marketing, but it was my major for several semesters of useless university.  The only things I remember from those classes are the words “target market” with no real context.

That’s just it.  I needed a lived context.

So my son builds these levels on the WiiU game Mario Maker.  He’s posted some of his favorites to the network so others can play them and, if they like them, give them a star.  He checked in the other night only to find two of his favorite creations had been removed from the network because they did not get enough stars in a given time span.

Here comes the pain.  And the learning.

I watched him go through all the stages of grief.  “That can’t be right?!”…”How dare they!!”…”Maybe if I tweak it and change the name I can re-upload it?”…”It’s hopeless.  What’s the point of building levels”…and finally, after a long grieving process lasting almost minutes, acceptance.

Unaware of how enthralled I was with watching this unfold (because I pretended to still be reading) he repeated the entire situation to me, making a point to vent his frustration because of how hard he worked.

“The worst part is, that’s the level I worked on the longest and it was my favorite!  Some of my other levels are just silly and were easy to build, and they have more stars than this one.  I wonder why?”

Karl Marx and a lot of other confused social scientists with bad beards (Adam Smith gets a pass on this one…no beard) like to claim that value is derived from the cost of production – the amount and difficulty of the labor that goes into it.  This is clearly false, and my son now knows it.

Even if you know this from a (rare) good economics teacher, you probably don’t really know it in your gut and know how to plan around it until you’ve experienced it.  Some of my favorite, most labor intensive blog posts get no love, while some silly Haiku I tap into my phone in a few seconds might get…well, a little more love at least (I guess my example isn’t that dramatic after all, since my readership isn’t that huge…Hi mom!).

This is an important lesson.  Sure, content is king.  Yes, build a better mousetrap.  The problem is that what you think great content and better mousetraps look like mightn’t be the same as what customers think.

There are two potential solutions: the product solution and the marketing solution (best used in tandem).  The product solution is to learn from what people do like and make products more like that.  The marketing solution is to learn what feelings people want to experience when using your product and do a better job of attaching those feelings to it, finding the niche of people who will “get it”, and getting the word out to them.

My son, a very stubborn and independent creative type not keen on compromising his design, immediately went with the marketing solution.

This is really a lot of lessons piled into one, but it all happened so fast it was like a single epiphany for my son.  It took me a long time to understand the value of building a “tribe” of loyal fans or customers (Hi mom!).  It took me a long time to see the value of capturing leads, doing personal one-on-one outreach to influencers and early adopters, and touting the real stories of happy customers to help draw in the more risk-averse with social proof.

My son had the epiphany less than ten minutes after his teary explosions during the second and fourth stages of grief.  Here’s how it went down.

He jumped onto some sort of chatroom type thing in the game and posted a question asking if anyone else had been frustrated by having a level removed for too few stars.  In minutes he was conversing with three or four others.  He checked out their profiles and levels.  He followed them.  They followed him.  Then they somehow came up with an agreement.  They would give each other the name of their newest levels and all play each others and give them a star, ensuring three quick stars, pushing it nearer the top of the newly added levels, raising the profile and keeping it from getting removed.

It was late and I was going to bed.  He doesn’t like to be the last one up, so he begged me to wait a few minutes while he dutifully played and starred some of their levels.  He double checked and verified that his new coalition had done the same for him.

He went out and talked with people, built a tribe around a shared frustration, collaborated to find a solution, and engaged in what MBA might call “synergistic strategic partnerships” (I don’t know if MBA’s would actually say that, but I imagine they would and this is my article).  He added them to his followers so that there could be accountability, followup, and future collaboration.

As a dad one of my solemn duties is to always think my kid too quickly plays the victim and doesn’t take things into his own hands.  It’s the kind of self-righteous worry a parent feels entitled to.  Except this time he robbed me of the opportunity to start waxing about how in my day we had to pick ourselves up by our bootstraps and mustached plumbers didn’t get any stars from anybody.

After a brief moment of feeling a victim of the system and being angry with idiot consumers who don’t appreciate good product, he saw his frustration as an opportunity.  Surely someone else felt the same?  Surely there was a way to work around it?  And he did.

He realized that intentions don’t matter, value creation does.  But value creation is not just in the product, but the feeling people have about it, the reasons they have to care, the connection you build with them.  Now even before building a level he preps his loyal allies to reduce the risk and boost the ratings when it is released to the network.  This is what authors do with their emails lists (sign up for mine here, I have another book coming out and you can be one of the early reviewers…you too mom!).

My kid isn’t some kind of special genius.  The world we live in is the most resource, information, and opportunity rich in human history.  If kids freely engage the world and follow their curiosity and intrinsic goals they will encounter a more diverse range of ideas and experiences than we can imagine.  When I try to directly teach my kids this stuff they scoff or sigh or roll their eyes or play dead hoping I’ll go for help so they can finally escape my words of wisdom.

In fact, unless we actively work to suppress it our kids urge to learn, experiment, innovate, create, and adapt will blossom.  That suppression often takes well-meaning forms like direct, mandated instruction from adult “experts” who know almost nothing about Mario Maker or other contexts kids actually care about.  It takes the form of classrooms and textbooks and tests and pressure to careerify interests.  It takes the form of parental worry that if their kid doesn’t learn the same bunch of arbitrary, mostly useless facts they were forced to memorize at the same age they did everything will fall apart and society will crumble.

Relax.  Your kid is going to be fine.  Even if they play a lot of video games.

Did you like My Kid Learned More from Mario Maker than I Did from a Marketing Major?
You may also like These Posts: