How to Keep Calm and Carry On in Turbulent Times 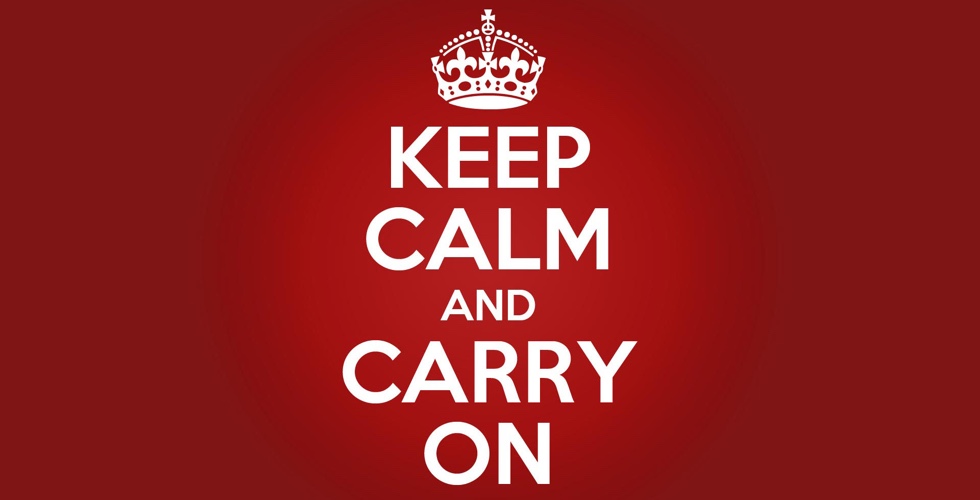 Who believes in the invisible hand nowadays? Keynesian techniques are the only techniques we can confidently expect to be implemented during economic turbulence. And can any citizen of a world power honestly expect their government to attempt a non-interventionist approach to international tensions? One may hope, but to expect such an approach may be naïve.

There’s too much at stake for any leader of a world power in trusting the invisible hand. The invisible hand requires turbulence, and we don’t like turbulence. When you’re 35,000 feet in the air and the airplane hits turbulence — usual and expected, but still heavy turbulence — what is one fleeting thought that may go through your mind? “Are we losing control? Are we going to be okay?” When our country, government, or community hits turbulence, many experience that same fleeting thought. Rather than seeing the turbulence as the natural occurrence that it is, we look at it as an ominous anomaly. Rather than seeing it as something necessary to — amazingly — fly a large metal tube over thousands of miles at over 500 mph, we think back to all those (statistically very rare) stories we’ve heard about plane crashes. It becomes difficult to rationally restructure our thoughts and keep in mind that hundreds of thousands of planes fly every day, that almost all of them hit some turbulence, and that only a miniscule fraction of them have ever crashed. We even tell ourselves that it would be safer to drive!

We’re no better as individual citizens. Political leaders are fully aware that turbulent times affect the emotions of the people and the decisions they’re willing to support. Politicians then respond to the emotional demands, whether out of their own fear of the turbulence, or fear of losing their jobs from not trying to alleviate the fears of the people.

It’s a cycle that seems inevitable. With 24/7 news and multiple outlets for any bias imaginable, is it possible for rational thought to overcome emotions during difficult times? Won’t there always be someone screaming fire? Maybe so, but is this a new phenomena caused by modern media?

I don’t believe that a libertarian answer to this question can justifiably fault the media, at least assuming the scenario takes place within a (relatively) free nation. Is there not something innate in us that wants the media to play with our emotions? Are we — paying customers — not waiting for the next anchor to scream “fire?” Would the media act as it does if their customers didn’t want it that way? Sure, we can question whether the signaling between the product offered and the product desired is accurate. It could be that the nation’s crony capitalism has strongly obfuscated real signaling.

However, in our case, I cannot submit to the idea of a complete disintegration between what stories are filtered through the media and what stories the public wants to hear. Just think back to the Republican primary debates. In 2008, the Republican primary debates had a total 42.87 million viewers. In 2012, there was a total of 72 million viewers. In 2016, there was a total viewership of 186 million [1] with the highest — the Fox News debate on August 7, 2015 — alone hitting 24 million viewers. [2] The least-watched debate of the year — held on Fox Business on January 15, 2016 — had 11 million viewers [3], and was the only debate that Trump did not attend.

Of course, correlation does not mean causation, but I feel confident linking this unprecedented viewership to Trump. If Trump was the cause, then what was it about him that so many people wanted to see? I don’t believe it was a desire to hear new and insightful policy plans offered by an unconventional candidate. Rather, it was to hear Trump insult a crowd of elites and journalists, to see if anyone was willing to punch back at Trump, and maybe some tuned in to see if Jeb would lose his cool after another “low-energy” jab. Ultimately, an unprecedented percentage of Americans watched Republican primary debates featuring the future President of the United States with the intention of being entertained, not informed.

With these results, does it not make sense for CNN to spend hours of airtime on Trump’s tweets instead of something like the nomination process of a new CIA Director? Modern media might not be the cause of the primacy placed upon emotions over reason; it might be that human nature’s primacy of emotions over reason caused modern media. If it’s a matter of human nature, then I must ask again: will there always be someone screaming “fire?”

That is, it will be if we give legitimacy to those screaming. Without sounding ingenuous, I propose that individual self-reflection and reformation can cause a change in ourselves which is evident to those around us, and such a change may cause a similar change in others.

And what is this change? It comes about through awareness of our personal triggers, noticing our reaction to triggers, questioning whether our reaction is emotionally-motivated or rationally-motivated and, if the former, replacing it with a rational reaction. When I do this, I may notice that my arguments on social media have pushed more people away from my position rather than towards it. I may notice that I immediately close myself off to any speech Trump is giving, simply assuming that there is nothing of sense he could say. Or maybe I did so with Obama’s speeches. And why? Sure, some can argue that it is rational to ignore Trump (and maybe it is), but is it rational if it means closing ourselves off to half the country? How can we know what political decisions to rationally support if we are not familiar with the mindset of the country in which we live?

I’m not proposing that self-awareness and putting our reason over our emotions will change the trajectory of our country, but I am proposing that it is a factor. The change within ourselves is real and it has real effects. When we become less emotionally-reactive, such stability becomes noticed, respected, and desired.

Remember, it’s safer to fly than it is to drive.

Did you like How to Keep Calm and Carry On in Turbulent Times
You may also like These Posts: