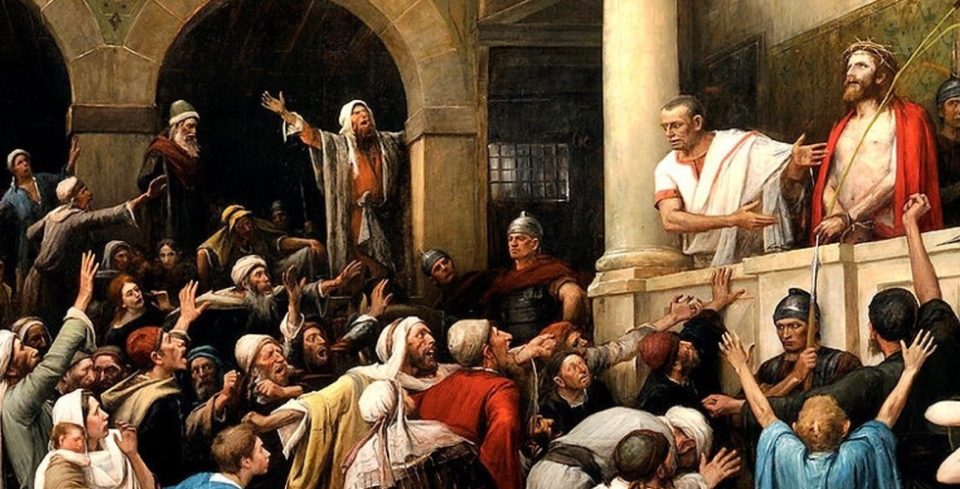 Recently, one of my friends on Facebook brought up the question of why there is presently such a heavy emphasis on discussing “toxic masculinity” but not “toxic femininity” or just “toxic behavior” in general. As he may have anticipated, many (if not most) of the responses were some iteration of arguing that historically, men have dominated the discussion, presumably exhausting the topic of “toxic femininity,” and now, finally, women have the opportunity to speak out against their male oppressors. And in a sense, this is true. However, their approach–which includes using the term “toxic masculinity”–is deeply misguided and oppressive in its own right. In fact, it perpetuates its own violence, and this is because it has adopted the same mentality and tactics of the men they’re denouncing.

As the late anthropologist René Girard convincingly argued, since the beginning of civilization, societies have been founded upon human sacrifice. Girard observed that humans are inherently mimetic–we try to imitate those around us by seeking to obtain what they have. However, what begins as admiration turns to envy, and this envy turns into conflict as people seek to take from others what belongs to them. Adoration turns into hatred and ultimately, murder. So Cain killed his brother Abel. Romulus killed his brother Remus. And on the examples go.

As violence threatened to tear apart civilizations, the people turned it against a single victim, a scapegoat, whose sacrifice would bring a cathartic sense of peace and harmony. Many times, the newfound sense of peace was so powerful that the people concluded that their victim must have been divine. If divine, then not really dead, and therefore any possibility that the people might have reconsidered the (in)justice of their actions was extinguished. And so mythology and the ancient pantheons were created.

The scapegoating worked only so long as all the participants were unaware that they were doing it, unaware that they were condemning an innocent victim. They had to believe that they were sacrificing the guilty party, the supernatural cause of their turmoil. It was not until the crucifixion of Jesus Christ that the spell was broken and eyes were opened to the innocence of their victims. The gospels are distinct from ancient myths in that they are told from the perspective of the innocent victim, and the violence of the mob that demanded his death is exposed for what it is.

Christ taught us that to dismantle this cycle of sacrificial violence, we must forgive* those we perceive to be guilty, and we must examine ourselves instead. We must forgive others lest we inadvertently condemn the innocent, for we know not what we do. We cannot expel evil and violence by isolating it in an individual or a group of people and casting them out. Satan cannot drive out Satan. We can only eliminate evil by patterning our behavior on that of Christ and desiring mercy, not sacrifice.

*Before I go any farther, I sense that it is necessary for me to point out that I am NOT saying that victims should merely forgive their abusers rather than seek justice. I recognize that this Christian teaching has often been wielded by abusers and their accomplices to silence their victims. So, please continue reading and try to understand what I am saying.

The history of western civilization is dominated by Christianity and its concern for victims, and over the centuries as we have become more aware of our own participation in the condemnation of the innocent, so has our regard for victims grown. However, divorced from the saving example of Christ, this concern for victims has been perverted into a weapon that is used to perpetuate the scapegoating and violence that is endemic to human nature.

As my friend David Gornoski writes,

Victimism demands this same redemptive mechanism but tries to shield our eyes to its violence by claiming to use it only in the name of official victims. Such witch hunts only implode into guilt-riddled chaos with the subsequent loss of differentiation.

And so we have seen many of the most violent and oppressive and abusive men claiming victim status. They attempt to excuse their behavior by blaming their parents, their spouse, their children, their boss, society, women, or Eve herself. They feel their violence is justified because they are owed something, some form of reparation like a spited god. Underneath this veil that so easily manipulates us because of our Christian cultural heritage is a deep narcissism. Victimism is merely the most effective vehicle in our time for the narcissist to reap all he believes he deserves.

We covet the victim status to gain social currency in a social order in which victims, real and perceived, jockey for footing atop the capstone of a pyramid built on sacrificing as victimizers the least-convincing self-identifying victims.

Women, as members of the human race, are not immune to any of this. Naturally, as mimetic creatures we have envied men and sought to emulate them, without ever considering which aspects of “maleness” were worth having and which should have been left by the wayside. Take our attitude toward sex, for example, perhaps best summarized by Sex and the City‘s theme of women having “sex like men” without emotional attachment or responsibility. It seems like we traveled at hyperspeed from Carrie and her three friends to #metoo and the chaos of no one really understanding what consent means anymore. Maybe having “sex like men” wasn’t all it was hyped up to be. Maybe men shouldn’t even be having “sex like men.” But here we are.

Similarly, in order to “get even” or seek justice in response to male oppression, many women have adopted the same mentality of oppressive men. They have seized one of the coveted crowns of privileged victim status and paired it with scapegoating the entire male sex. This special combination allows them to blame men for everything, including women’s own bad behavior. Instead of seeing men as individuals, human beings alongside us, each of us possessing toxic traits to varying degrees, many women have labeled maleness itself as the problem. Like the ancient Platonic dualism between spiritual (good) maleness and earthly (bad) femaleness, modern women have adopted the reverse of this sexist dualism with all evil springing forth from maleness itself.

Not only does this approach allow our society to scapegoat and demonize innocent men, it blinds women to their own violence and allows it to continue. In the discussion begun by my friend, a young woman asked me what specific behaviors women commit that are as bad as the violent crimes overwhelmingly committed by men. When I mentioned abortion, child abuse, elder abuse, bullying, and becoming accomplices of male abusers in their abuse of someone else, these violent acts were immediately dismissed as being the fault of men, and at any rate, not nearly as bad or as frequent as violence committed by men. Yet I doubt their victims would agree that when a woman commits abuse or allows her husband to abuse her own children that it is trivial and that the woman can’t be held accountable for her actions. To deny this is to once again assign to women an inferior status, incapable of thinking for herself, too stupid and infantile to be held to the same high standard as men.

If women really want their activism to be fruitful and to work toward ending the cycles of violence, we must be willing to treat men as individuals. We must be willing to identify the toxicity within ourselves and seek to eradicate that first. We must not tolerate any violence, regardless of who commits it. There can be no special victim status, no associated immunity as we blame a scapegoat for that of which he is innocent–namely, our own actions.  The way forward has never been to copy the oppressive behaviors of others, but to copy the merciful, liberating, and peacemaking way of Jesus.

This article originally appeared on The Torch Blog.