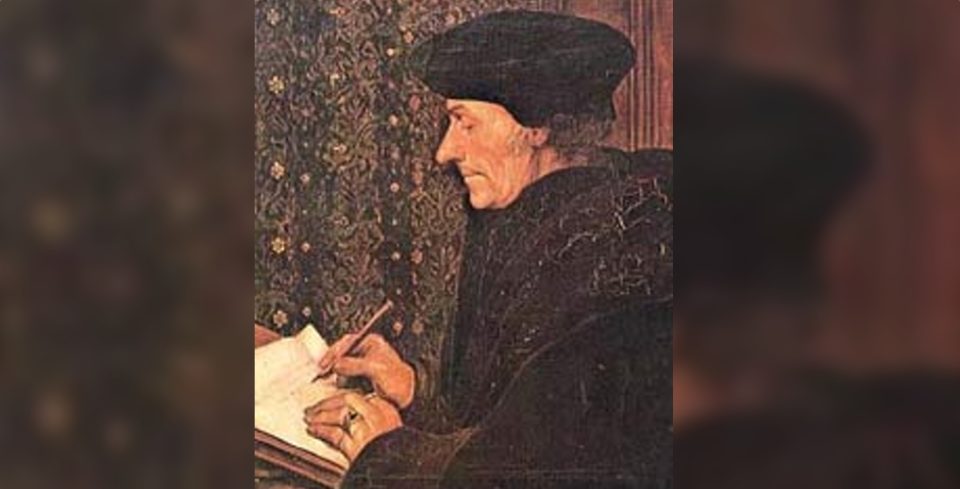 2017 marks the 500th anniversary of the Protestant Reformation. Martin Luther nailed the 95 Theses to the church door in Wittenberg on October 31st, 1517, and the world was never the same again. Consequently, publishers, universities, and various organizations are hosting a variety of book and conference projects all over the world for the next four years (1521 was the Diet of Worms). The Reformation can mean many things to different people—especially as a historical epoch can be viewed through a theological, social, cultural, or literary lens. One of the indisputably important characters, however, is Erasmus: that sickly orphan Dutch boy who truly lived to write.

Desiderius Erasmus (1466-1536) is known by some as the premier humanist scholar, to others the compiler of the first Greek New Testament, and to others the theological spar-partner of Martin Luther (…and John Eck…and about every other theologian alive at the time). But a less popular—yet well-established—facet of his life is his political contributions through an explicitly Christian lens.

Erasmus was perhaps the greatest critic of the warfare state since the rise of Constantine. And not only did his writings relentlessly undermine war (and specific conflicts during the 1500s), but Erasmus maintained a deep suspicion about the state in general, railed against worldly empires and kingly authority in Hebrew-prophet-like fashion, mocked the vanity and incompetence of government bureaucracy, and applied the teachings of Jesus regarding peace as readily and immediately as possible. More than a theologian, a priest, or a professor, Erasmus was a pacifist.

“The true and only monarch of the world is Christ,” he writes, “and if our princes would agree together to obey His commands, we should truly have one prince and everything would flourish under Him.” Empires, after all, are just large-scale gang operations. Famous kings, rulers, and politicians are therefore little more than effective gangsters. In Erasmus’ own words, “When you hear of Achilles, Xerxes, Cyrus, Darius or Julius, do not be overwhelmed at all by the enormous prestige of their names; you are hearing about great raging bandits.”

At the end of one of his books (The Education of the Christian Prince), he dedicates a whole section on war and concludes soberly, “He rejoices to be called the Prince of Peace; may he do the same for you, that your goodness and wisdom may at last give us relief from these insane wars.” And insane wars they were. Large swaths of Europe were crumbling in never-ending military conflict. Through mainstream media and other means, the masses were fooled into thinking such that such wars fought in the name of Christ were legitimate for that very reason (and because they were ordered by a prince or other political figure). Supposedly, more wars = more peace. Erasmus could see through this empty rhetoric, and exposed the empire’s clothes:

“Are you anxious to win Turks for Christ? Let us not display our wealth, our armies, our strength. Let them see in us not only the name, but the unmistakable marks of a Christian: a blameless life, the wish to do good even to our enemies, a tolerance which will withstand all injuries, contempt of money, heedlessness of glory, life held lightly…

We are getting ready to annihilate all Asia and Africa with the sword, though most of the population there are either Christians or half-Christians. Why do we not rather acknowledge them, give them encouragement and gently try to reform them? If we have designs for political expansion, if we are hankering after their wealth, why do we cover up such a worldly thing with the name of Christ?”

He could have been speaking to the American Empire today: Don’t flaunt your F22s and warships…why don’t we acknowledge Christians in all the countries the US military has invaded? Why pretend that these wars are “necessary” and “preventive” when they’re just another mechanism to profit central banks, acquire resources, and empower the empire?

It is hopeless to try to marry Christianity with large-scale violence. Aquinas’ popular “just war theory” (building on Augustine) didn’t add up; “whoever preaches war,” Erasmus said, “preaches one who is the opposite of Christ.” Indeed, “He who is responsible for war is ungodly.”

Even more absurd is the concept of the “Christian soldier.” Erasmus brilliantly deconstructs popular admiration of Christians in the military by pondering whether they could truly pray the Lord’s Prayer:

‘Our Father’? What impudence to dare to call on God as Father, when you are making for your brother’s throat! ‘Hallowed be thy name.’ How could the name of God be less hallowed than by your violence towards each other? ‘Thy kingdom come.’ Is this how you pray, when you are planning so much bloodshed to get a kingdom for yourself? ‘Thy will be done, on earth as it is in heaven.’ But God’s will is for peace, and you are preparing for war. Do you ask for daily bread from our common Father when you burn your brother’s crops and would prefer them to be lost to you rather than to benefit him? And then, how can you say ‘Forgive us the debts we owe, as we forgive those who are indebted to us’, you who are hurrying to murder your kin? You prayed to be spared the danger of being put to the test, but you risk danger to yourself so that you can endanger your brother. Do you beg to be delivered from the evil one while you are plotting the worst evils against your brother at his prompting?” (117)

Erasmus’ preoccupation for peace—based on Christian theology—was no doubt unpopular and shut down many political opportunities. It also made his acquisition of patrons difficult, which (literally) left him short on food for years of his life. But he knew he wasn’t on this planet simply to build up assets and live a life of immediate, material comfort; too many people were being killed, starving, and without hope each minute of the day. To overturn the very heart of the gospel—peace and restoration between God and humanity—for some kind of personal benefit, would be unthinkable.

Others didn’t see it that way, just as many don’t see it that way today. In a strange twist of time and theology, it is now considered ungodly to make an objection about Christian involvement in the military. Those who point believers away from guns and killing are considered traitors against “God’s nation.” It is clear, then, that legacy of Erasmus is needed today more than ever.

For a highly readable and respected biography of Erasmus, see Halkin’s Erasmus: A Critical Biography. For an accessible guide to his writings, see The Essential Erasmus and The Erasmus Reader (particularly pertinent to his work on nonviolence).