Takeaways from the Christians For Liberty 2015 Conference 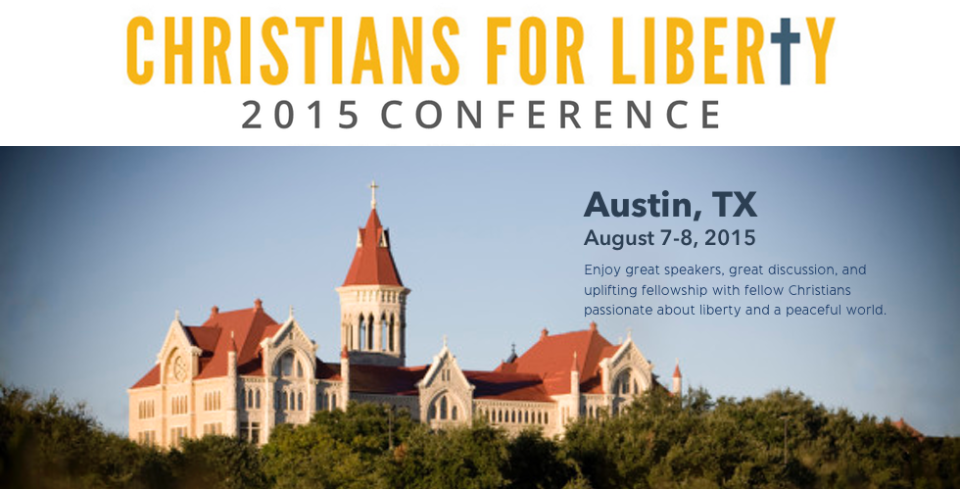 This guest contribution is a recap of the Christians for Liberty 2015 Conference by Akeem Robinson, vice chair of the Libertarian Party of Georgia. You can find the original post here. Thank you, Akeem, for letting us re-post this!

This is the first article in what I would like to become a series of articles describing liberty related events.  As Vice Chair of the Libertarian Party of Georgia, I see it to be beneficial to inform everyone as much as possible about events going on of which liberty minded people can be a part.  This article expresses only the opinion of the writer.

Takeaways from the Christians For Liberty 2015 Conference

It may at first seem like someone being a Christian and a Libertarian are at odds with one another, but that could not be further from the truth. This past weekend in Austin, Texas was the second annual Christians for Liberty Conference (CFL). There were incredible speakers from across the nation- from Alaska to Washington, DC. This is one of the only events that I have heard of where the two beliefs of Christianity and Libertarianism are combined, so there was a lot of excitement among those who were finally able to meet like-minded people, since we perceive ourselves in a niche group.

On Friday evening there was a pre-conference speaker, Colin Gunn, who is a documentary filmmaker.  He has directed films such as Captivated and IndoctriNation.  That evening he described the making of his most recent film, Wait till it’s Free, which skillfully described the American healthcare system and how it was not a true free market system even before Affordable Care Act (ACA). It uses an analogy of how capitalism works in an American diner to show how the healthcare system could truly function in the free market. In what other industry do you purchase something and not know the price of what you are buying? A hospital may give you a “quote” on your procedure, but when you actually get the bill it can be several times more than what the quote stated. The consumer has no negotiation power before the procedure or a true method for disputing the cost after the procedure.  This is because there is not a business transaction between the patient and doctor (consumer and business), but a huge bureaucratic wall (called an insurance company) that prevents this arm’s length transaction. The film gives examples of how both doctors and patients are removing themselves from this system and proving how much superior capitalism really is.

The actual conference started on Saturday morning with the organizer Dr. Norman Horn, who is the founder of the Libertarian Christian Institute, giving his introductory speech and introducing the first speaker, Dr. Laurence Vance.  Dr. Vance’s topic was Christianity, Libertarianism, & the Drug War.  Although many of the people who support the War on Drugs are Christians, he pointed out that it makes more sense to be against it.  It was explained in many ways where there are other things that are just as addictive and dangerous as marijuana, but are normal and legal.  The clearest comparison would be the use of alcohol.  It is possibly more addictive and dangerous, but completely legal.  If someone’s reasoning is that smoking marijuana is immoral, then he explained that the church never used the government to enforce morals.  Both Christian beliefs and Libertarian principles agree that vices should not be criminalized by the government, but dealt with in other ways.

There were two tracks for the convention, therefore it was not possible to sit through all of the speakers.  It was a tough choice for some attending the conference to decide which speakers one should hear.  There was one person who kept switching between the two rooms with conference speakers to make sure he didn’t miss out.  The track I went on had Doug Stuart as the first speaker. His topic was “The Things that make for Peace: Gospel Against Empire”.  He pointed out that Libertarians believe in the Non-aggression principle which is slightly different from the Christian view of peace (shalom).  The Non-aggression principle does protect others, but does not require one to help take care of others as the Christian peace does.  Libertarians do believe though that relying on liberty will produce the best results for everyone.  Both Christians and Libertarians believe that it is not the government’s job to forcibly provide for people.

There were many other incredible speakers that I was fortunate to hear from such as Wes Benedict, the executive director of the Libertarian Party National committee, who developed a 500 word summary on how the beliefs of Libertarians and Christians are compatible.  Lawrence Reed from the Foundation for Economic Education spoke about what characteristics make a real hero and described the accomplishments of people such as Vivian Kellums, Harriet Tubman, and Sir Nicolas Winton.  Dr. Mark Cherry’s topic was on the development of secular fundamentalism, which explained how the state is taking the place of the church in today’s society.  And T.K. Coleman, from a company called Praxis, showed us how to place our identity in God and set our goals according to His will.

One speaker whose topic relates to this article was Stephanie Slade, an editor for the Reason magazine.  She was originally going to speak about Free speech, journalism and Christian practice, but ended up speaking about free exercise instead of free speech.  As libertarians we believe that it is important to protect everyone’s rights, which frequently ends up being on the opposite side of the mainstream.  She gave the example of John Adams defending the British soldiers from the Boston Massacre.  Defending the British soldiers who killed the Boston residents was not popular with the locals and could have adversely affected the reputation of John Adams, but he still proceeded with it.  He understood that if we want to protect our rights, we have to protect everyone’s rights.  Stephanie pointed out that being a Christian Libertarian and defending gay rights is difficult for some to understand.  It is a foreign idea to some that a person can defend something, but believe that it is morally wrong.  Throughout history, the group who is the majority tends to enforce their morals by putting them in the law books, which is tempting to do especially because people think it is the right thing to do.  We are at a turning point where religious freedoms are becoming the minority rather than lifestyle freedoms.  Either way, both libertarians and Christians believe in defending everyone’s rights.

The event concluded with Dr. Norman Horn who spoke on the New Testament Theology of the State.  Then dinner was served and a small group of us discussed how we can develop Christian Libertarian discussion groups in our local area.  At the same time, the rest of the conference attendees listened to Jason Rink speak about how Christian Libertarians should show love to everyone.  Following the conference a social event at a nearby restaurant called Opal Divines Penn Field was held.  Anyone who has ever attended a Libertarian conference knows that this is where the real discussions occur.

As libertarians, we take a strong stance for free speech. Even if we don’t agree with someone’s views we are able to agree to disagree. Moreover, we should even go to the extent of protecting someone’s rights to preserve their freedom even if their views don’t align with ours (for Christians change “even if” to “especially”). There are so many aspects of the two beliefs that align that you don’t notice until you really put them next to each other. Some even believe that, out of the political parties, the Libertarian party is the only one that lines up with Christianity because it is the only view that allows people to make their own decision about themselves without the use of force (free will). Whether the reasoning be for charity or for morals, it is not the government’s position to use force them upon us.

Attending this conference was an incredible experience thanks to the speakers and the people that I had a chance to meet.  I cannot to do justice to many of the arguments that the speakers made at the conference in the span of this article.  Videos of the speakers from the conference will be posted on the libertarianchristians.com if you want to see the whole discussion.