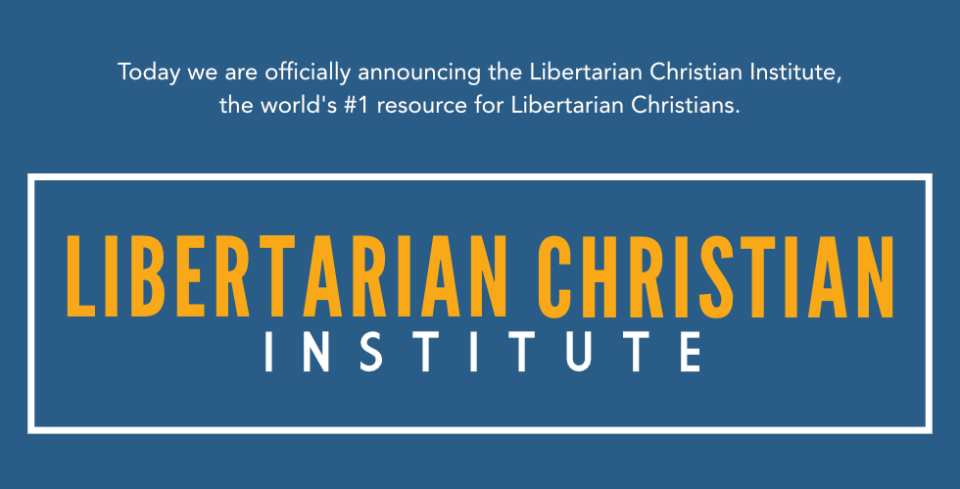 In late November 2008, I decided to start a website dedicated to explaining the connections between Christian theology and libertarian theory, and to promoting libertarianism to Christians. My motivation was simple: the modern church did not have a viable, consistent, biblical theology of the state. I believed that the modern American church’s binary emphasis on either conservative Republican or liberal Democrat politics missed the fundamentally juxtaposed nature of the kingdom of God to the kingdoms of men. Moreover, while many theologians have successfully defended either anti-state or pro-free market capitalism ideas, finding those that converge upon both as the most consistent ethical and biblical position is quite rare. This new website, then, would stand in the gap to speak truth to power and to promote a society based on free markets and free people, all supported through sound theology, natural ethics, and Austrian economics. Libertarianism and Christianity, compatible and self-evident.

So, I purchased www.libertarianchristians.com, mainly because libertarianchristian.com (note: without the “s”) was already taken, as was christianlibertarian.com. (Besides, LCC sounds pretty good, right?) My intuition and experience suggested that this was a good idea, but little did I know how it would expand and take on a life of its own. I quickly gained traction from people such as Tom Woods noting my work and promoting it. Steady, healthy growth followed. My involvement in Students for Liberty and Young Americans for Liberty while at the University of Texas at Austin helped push the message forward with students. I published guest articles in a number of venues, and began to be sought out by groups such as the Cato Institute for comments on current events and policy ideas. Our Facebook discussion group grew to multiple thousands of users. Within a few years, the site gained enough notoriety that I was invited by the Washington Post in December 2011 to make a contribution on their well-trafficked “On Faith” blog. In 2012, we began to see a significant uptick in mentions of “Christian libertarianism” in popular Christian publications and even the occasional conference.

Thus began what I consider an “inflection point” of libertarian Christian popularity. When I first started to talk about these things to friends and family in 2005, declaring oneself to be a libertarian and a Christian was not exactly a winning conversation topic with other Christians, sometimes not even with libertarians. I recall some church members, for instance, that thought this now meant I would support Green Party candidates. Ten years later, the intellectual landscape is drastically different, and I would like to think that LCC has played a significant role alongside great libertarians such as Dr. Ron Paul and others who have promoted libertarian ideas while also demonstrating their commitment to the gospel of Jesus Christ.

Now we come to the present day. Building on our landmark Christians For Liberty Conference in 2014, we planned an even greater event this year which took place just 10 days ago. At this year’s Christians for Liberty Conference, we made an extraordinary announcement: the founding of the Libertarian Christian Institute. The board of directors did not expect to announce it this early, but we were unbelievably blessed to receive fully recognized federal 501(c)(3) status a mere four days after filing our final paperwork with the IRS. (We have even jokingly suggested that this astounding feat of the IRS might turn some atheists into Christians.)

The Libertarian Christian Institute is the formalized continuation of the LibertarianChristians.com project. Creating an organization is a complicated task. We have spent the last year shaping our ideas regarding where we fit in the current theological, intellectual, and community environments, and we expect those ideas to evolve with time. LCI’s goal, in short, is to continue the original mission of LCC by demonstrating to the church that libertarianism is the most consistent expression of Christian political thought. We see this being carried out in a number of ways. First, we will continue to produce and disseminate great scholarly and popular Christian libertarian content on this site and on social media. Second, we want to extend the reach of Christian libertarians from online venues to real world, person-to-person interactions. To that end, we will continue to host educational conferences such as CFL, to participate in other conferences throughout the world, to produce materials that Christian libertarians can use in their churches, and to provide an online hub to enable real-world meetups with our small groups program.

We have big plans in place moving forward. Right now, we are also seeking to hire an Executive Director / CEO to run the day-to-day operations of the organization. If you or someone you know is as committed as we are to bring the Christian libertarian vision to the church and to the world, then please contact us for more information.

Lastly, we greatly appreciate your prayers on our behalf. Pray that we can raise the needed funding, that we can be effective in our tasks, and most of all that we always remain faithful to the gospel message. Nothing will be accomplished here without the grace of God and the support of his people, so please let us know how we can continue to improve our service to you and to the church.

May God bless all of our efforts to serve and to honor his name in all the earth.