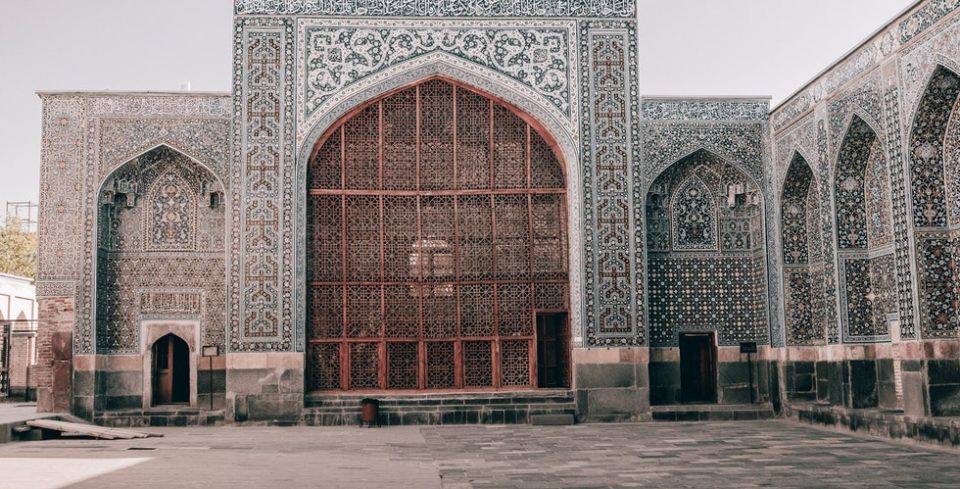 At its height under Suleiman the Magnificent, the Ottoman Empire (1299–1923) – the closest thing to a global, Islamic caliphate – controlled vast swaths of land in the Middle East, North Africa, western Asia, Europe, and the Balkans. It was one of the most powerful, most long-lived, most multiethnic, most multinational, and most multilingual empires in history. However, it failed miserably at imposing Sharia law and the Muslim faith on all its subjects, and, in fact, didn’t even make an attempt to do so.

Back in 2006, Benjamin Netanyahu was interviewed by Glenn Beck on CNN. You can read a transcript here. Speaking about Iran, Netanyahu said the following:

Iran is Germany, and it’s 1938, except that this Nazi regime that is in Iran, that’s a religious kind of fanaticism, but it wants to dominate the world, annihilate the Jews, but also annihilate America. Remember, we’re the small Satan. You’re the big Satan.

We’re just the first way station en route to you. So there is this fundament fanaticism that is there. It’s a messianic cult. It’s a religious messianic cult that believes in the Apocalypse, and they believe they have to expedite the Apocalypse to bring the collapse of the West.

Ahmadinejad, the president of Iran, is first trying to develop nuclear weapons and then going about his mad fantasy of global conflict. So he has to be stopped. I think when you have something as fanatic and as dangerous as this, the question now is not whether he should be stopped, but how’s he going to be stopped?

So I think the real problem is: Do we let this fanatic regime, this messianic cult of the Apocalypse, get their hands on atomic weapons? I think it’s folly.

And I don’t think it’s just an Israeli question any more so than Hitler was just a Jewish question. Hitler started with the annihilation of the Jews, but pretty quickly moved on to threaten the entire world. And America woke up late, after 6 million Jews died.

But in our case, you know, we don’t have to wake up dead in order for people to realize that he threatens America. We want to both defend ourselves, defend the Jewish state, certainly, but also defend America and free civilization against people who would extinguish our freedoms and our lives.

If you don’t act, it means that it will be the first time in the history of the world that a totally unstable, globally mad regime will have atomic bombs and the means to deliver them.

This means, a, that they will dominate the Middle East very quickly. They will make the Persian Gulf an Iranian pond. They will control the world’s oil supply. And they will probably use the weapons, first against my country, and then to intimidate or threaten Europe. They want to control the world.

And what kind of time frame did Netanyahu give for Ahmadinejad and Iran to fully develop into Hitler and Nazi Germany? He figured that there were only five years left:

There are different estimates, but they all hover between the two- to four-, five-year range, and we may be wrong. We were wrong about North Korea.

How long will it take? The estimates could be wrong. I was referring to the fact that people thought that North Korea would take longer to produce a device, first device. And here, we think – we don’t know – the official statement give by the chief of Israeli intelligence – and I can say this because it was publicized – it was said in our foreign affairs and defense committee in our Knesset, our parliament, he said it will take them anywhere up to three years to cross all the nuclear technology threshold, and then it takes about a year or two to weaponize.
But this at most would give us five years. It could very well be next year. Ahmadinejad, the president of Iran, is boasting that he’s on the express train.

This was in late 2006. I mentioned Netanyahu’s timeframe in my 2008 article “How to Prevent a War with Iran.” There I also referred to some statements by Elwood McQuaid in the magazine Israel My Glory, published by the Friends of Israel Gospel Ministry. Said McQuaid:

Annihilating the Jewish state is merely a warm-up. Although the lynchpin of Ahmadinejad’s crusade is a first-strike success against his near neighbor Israel, the next move is westward to Europe and then on to finish off the hated United States.

Replace the name Hitler with Mahmoud Ahmadinejad who rants against his selected scapegoats, Israel and the Jewish people, blaming them for every iniquity and offering the only ‘acceptable’ solution: genocide and annihilation of the Jewish state. His desire is not for a 1,000-year Reich but for a global, Islamic caliphate.

Well, it has been over five years now and all I can say is: some caliphate.

I want to briefly quote some statements about Iran from three recent LRC articles, the first two by Michael Rozeff and the last one by Eric Margolis.

Few Iranian Jews take Ahmadinejad’s anti-Israel rhetoric seriously, and they point to the fact that little has changed for Iranian Jews under him. “Anti-Semitism is not an eastern phenomenon, it’s not an Islamic or Iranian phenomenon – anti-Semitism is a European phenomenon,” Ciamak Morsathegh, head of the Jewish hospital in Tehran, explained. Iran’s forty synagogues, many of them with Hebrew schools, haven’t been touched. Neither has the Jewish library, which boasts twenty thousand titles, or Jewish hospitals and cemeteries. Still, Iran’s Jews have not sat idly by. The Jewish member of the Iranian Majlis, or parliament (most religious minorities are guaranteed a seat in the parliament), Maurice Mohtamed, has been outspoken in his condemnation of Ahmadinejad’s comments.

So, Jews have hospitals, schools, libraries, and cemeteries in Iran, plus a Jewish member of the Iranian parliament. That is some global, Islamic caliphate that Ahmadinejad is instituting.

The fact is that Iran is not preparing its conventional armed forces to launch an offensive war on Israel. It has no announced intention of doing such a thing. It has no strong or urgent reason to do such a thing. Iran has no casus belli. In view of Israel’s nuclear arsenal, Iran would face enormous losses if it attacked Israel in the future. Iran’s leaders know this.

Furthermore, Iran’s armed forces cannot attack Israel. The distance between Tehran and Tel Aviv is almost 1,000 miles. The two countries are separated by Iraq, Syria, Lebanon, Jordan, and Saudi Arabia. Iran has no air force capable of flying such a distance, even one way. Its ground forces are not about to invade the intervening countries, now or in the future. That would bring the U.S. and other nations against Iran.

You cannot have a global, Islamic caliphate without first having one in the Middle East.

And third, you can’t establish a global, Islamic caliphate without an air force and a navy:

The mainstay of Iran’s air force remains about 60 ancient US-built F-14 naval fighters, F-4 Phantom strike aircraft dating from the Vietnam era, and some old US F-5 trainers. Iran also has a grab bag of some 25 Soviet/Russian Mig-29’s, a similar number of capable SU-24 strike aircraft, and some 20 Chinese outdated F-7 fighters. The US -supplied aircraft all suffer from metal fatigue and are more of a danger to their hapless pilots than an enemy.

Iran’s bathtub navy has a few small frigates and three modern Russian Kilo-class submarines that are effective in shallow coastal waters. Iran’s sizeable numbers of Chinese anti-ship missiles on shore, at sea and carried by aircraft might score a few lucky hits on the mighty US Navy or oil tankers, as could its ample supply of magnetic mines.

But any US assault of Iran, would open by surprise attacks from waves of cruise missiles and stealth aircraft against Iranian air bases, ports and communications hubs. Most of Iran’s air force and navy would be destroyed. Iran’s obsolete air defenses would be put out of action by missile and cyber-warfare attacks.

Ahmadinejad couldn’t establish a global, Islamic caliphate if he tried.

There is another reason why the idea of a global, Islamic caliphate is a pipe dream of American neoconservatives and conservative evangelicals: Muslims are too busy killing each other. Although Sunni and Shiite Muslims have been killing each other off and on since the death of Muhammad their prophet in 642, the warring between the two groups really took off in the Iran-Iraq War in 1980-1988 when hundreds of thousands died on each side. The U.S. invasion of Iraq in 2003 deepened the Sunni-Shiite divide.

According to Mapping the Global Muslim Population: A Report on the Size and Distribution of the World’s Muslim Population, published by the Pew Research Center’s Forum on Religion & Public Life, Shiites, which make up about 13 percent of all Muslims, are mainly concentrated in Iran, with significant numbers in Iraq, India, and Pakistan. These four counties account for between 70 to 80 percent of the population of Shia Muslims. The majority of Muslims are Shiites in only Iran, Iraq, Azerbaijan, Bahrain, and perhaps Lebanon. Kuwait, Saudi Arabia, Syria, Yemen, Turkey, and Afghanistan also have small pockets of Shia Muslims.

Just don’t ask John McCain – he doesn’t know the difference between the two. And neither do other prominent politicians and government officials.

I haven’t even talked about how Ahmadinejad is subordinate to Iran’s Supreme Leader, Ali Khamenei, who has control over Iran’s military and has declared the possession of nuclear weapons to be “a grave sin” and “senseless, destructive and dangerous.” Or how in Iran’s recent legislative election, Jews won three seats, Catholics won four, Armenians won five, and Zoroastrians won two. Or how the bulk of the seats went to opponents of Ahmadinejad. Or how Ahmadinejad’s sister lost her bid for a seat in the Parliament.

The three stooges running for the Republican presidential nomination – who just spoke at AIPAC about the dangers of Iran – are more dangerous then Iran will ever be.

Ahmadinejad is some Hitler, and Iran is instituting some caliphate.

Originally posted on LewRockwell.com on March 8, 2012.