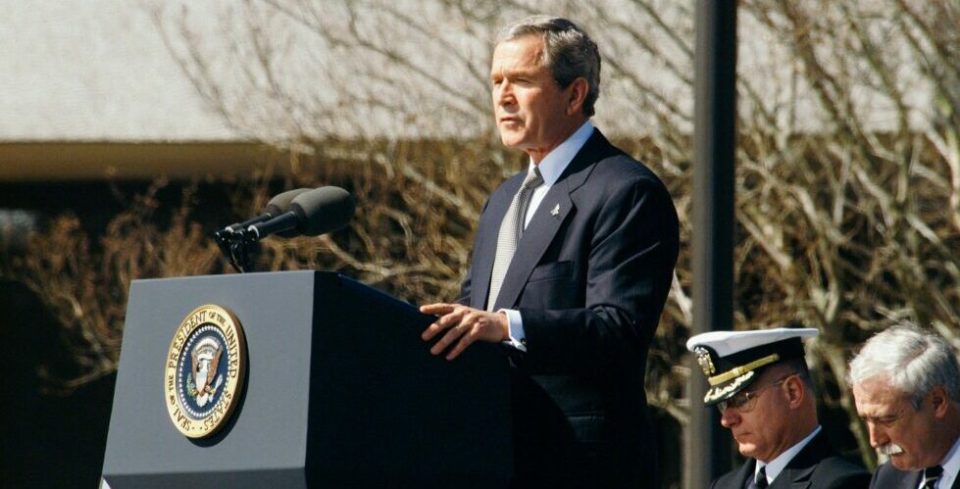 “Like all members of the military profession I never had an original thought until I left the service. My mental faculties remained in suspended animation while I obeyed the orders of higher-ups. This is typical with everyone in the military service.” ~ Major General Smedley Butler

“If soldiers were to begin to think, not one of them would remain in the army.” ~ Frederick the Great

“I find in existence a . . . dangerous concept that the members of the armed forces owe their primary allegiance and loyalty to those who temporarily exercise the authority of the executive branch of the Government, rather than to the country and its Constitution they are sworn to defend. No proposition could be more dangerous.” ~ General Douglas MacArthur

“There is one thing in the world more wicked than the desire to command, and that is the will to obey.” ~ W. K. Clifford, mathematician and philosopher

After almost ten years of fighting in Afghanistan, the deadliest day for U.S. forces was just a few weeks ago on Saturday, August 6. On that day thirty U.S. military personnel were killed when their helicopter was shot down. The majority of those killed were said to be elite Navy Seals from the same unit that killed Osama bin Laden.

The ones who bear the most responsibility for the 9/11 attacks are the pilots who flew the planes, none of whom were from Afghanistan. No American was ever harmed by anyone in Afghanistan until the U.S. military invaded and occupied that country. The United States even supported the Muslim insurgents and Afghan militants when they were freedom-fighting Mujahideen fighting against the Soviets when they invaded Afghanistan.

Tens of thousands of Afghans are now dead who had never threatened America and had nothing to do with 9/11. Over 1,700 American soldiers are also dead, and many thousands more have life-altering injuries.

So, what is the U.S. military doing in Afghanistan?

The purpose of the U.S. military should be limited to defending the United States, securing its borders, guarding its shores, patrolling its coasts, and enforcing a no-fly zone over its skies. Period. To do otherwise is to pervert the purpose of the military.

This means the purpose of the U.S. military should never be to defend other countries, secure their borders, guard their shores, patrol their coasts, and enforce no-fly zones over their skies.

This also means that the purpose of the U.S. military should never be to remedy oppression, human rights violations, sectarian violence, ill treatment of women, forced labor, child labor, religious or political persecution, poverty, genocide, famine, or injustice in any foreign country.

Clearly, no U.S. soldier, sailor, or marine had any business stepping foot in Afghanistan in 2001 or flying a helicopter there in 2011. Those who returned in a coffin (if enough of their body parts could be found) died unnecessarily, duped, in vain, and for a lie.

So again I ask: What is the U.S. military doing in Afghanistan?

The only answer is unconditional obedience. Although some U.S. soldiers, because of misguided zeal, may have wanted to go to Afghanistan after 9/11, few would choose to go now if it were their decision to make. But soldiers were told to go and they went, and soldiers are still being told to go.

Even worse, those that did consider some or all of these things went to Afghanistan anyway. They may not have even bought in the baloney about fighting for our freedoms or fighting them “over there” so we don’t have to fight them “over here,” but they went anyway.

If you want to see a perfect example of unconditional obedience on display, then just look at the recent interview on the Diane Rehm show about “Navy Seals and U.S. Strategy in Afghanistan.”

After announcing that U.S. forces were continuing their investigation into the shooting down of the helicopter in Afghanistan, Diane introduced her guests in the studio, Thom Shanker, the Pentagon correspondent for the New York Times and Paul Pillar of the Center for Peace and Security Studies at Georgetown University, and by phone from Plymouth, Massachusetts, former Navy SEAL lieutenant commander Anthony O’Brien. Joining the panel later by phone was Lawrence Korb, senior fellow at the Center for American Progress and former assistant secretary of defense in the Reagan administration.

The second caller to the show was someone named Don, who made this comment:

I just wanted to comment real quick. Any time you have generals on the air and they’re pressured to give some reasons why we’re in this war in Afghanistan, they always fall back to a main reason being women’s rights, so girls can go to school, you know, for all the Taliban oppression. And I was just wondering if your panelists thought that that was really a legitimate reason, that we should have our military spending billions of dollars a year in this country to fight for women’s rights.

Diane referred the caller to Anthony O’Brien, who gave this reply:

I agree with the caller’s premise. The primary reason why you engage the military at the strategic level is for the national security interest of the United States of America. And as much as I’m a fighter for the rights of women, it is – it’s not our duty in the military, primarily, to protect the women or stop drug trades, et cetera. However, the president is the boss, and he calls the shots. And if – whether it be President Bush or President Obama, when they tell us where to go and when, we give a snappy salute, and we do what we’re told.

Well, I just want to give Anthony a snappy salute ’cause his answer is perfect. I mean, we hear so often these conversations among civilians: why are we there, I don’t want us there or the opposite, we should be there. The military does not assign itself these missions. They follow the orders of the elected civilian leadership who are representing, Diane, your caller and everybody else. So that is where the responsibility for these decisions resides at the end of the day.

My only comment is simply this: Only God deserves unconditional obedience.

Originally published on LewRockwell.com on August 31, 2011.