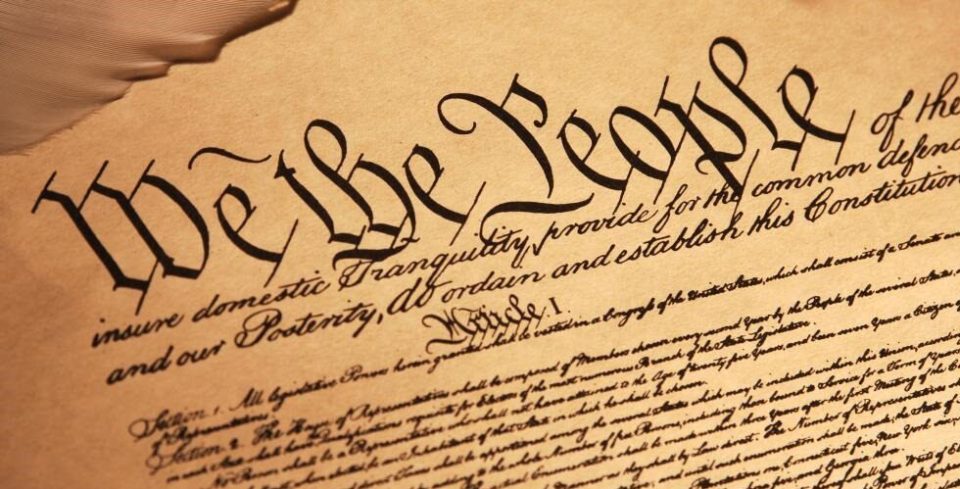 American political institutions presuppose certain convictions about human nature, the worth and prerogatives of persons, the meaning of life, the distinction between right and wrong, and the destiny of the individual. The Colonists came to their understanding of these matters as heirs of the intellectual and religious heritage of Christendom—the culture whose shaping forces sprang from ancient Israel, Greece, and Rome.

Given the consensus of two centuries ago—which regarded man as a sovereign person under God—it was only logical to structure government so as to expand opportunities for the exercise of personal freedom. The Constitution is clearly designed to maximize each individual’s equal right to pursue his own peaceful goals and enjoy the benefits and responsibilities of ownership.

The Declaration of Independence put into words what nearly everyone was thinking, that personal rights and immunities are ours because we are created beings, that is, we manifest a major purpose and intent of this universe. This implies a firm rejection of the alternative, which is to assume that we are the mere end products of natural and social forces, adrift in a meaningless cosmos. For if the universe is meaningless, then no way of life is any more meaningful than any other; in which case Power has no limits.

Our forebears had firm convictions about the purpose of life, and knew that in order to achieve life’s transcendent end Power must be limited: “Resistance to tyrants is obedience to God,” they declared. If life is viewed in these terms, how shall we conceive the proper scope and competence of government? What is its role in society? What functions should we assign to it?

Government is the power structure of a society. This is the first and most important fact about the political agency, that it has the legal authority to coerce. The second thing is to inquire whether the power wielded by government is self-sprung, or delegated by a more comprehensive authority than the merely political. Does government rule autonomously or by divine right; or is the real power located elsewhere and merely loaned to government? The Constitution is clear on this point; the power is in the people to lay down the laws which Power must obey. They set it up; they tell it what to do.

The people empower an agency to do certain things for them as a nation, but if we isolate the provisions they laid down to limit government the prevailing intent or consensus which made the Constitution its political tool becomes clearer.

The powers not delegated to the United States by the Constitution, nor prohibited by it to the States, are reserved to the States respectively, or to the people. Amendment X

The people, furthermore, possess a body of rights by native endowment above and beyond those mentioned in the Constitution.

The enumeration in the Constitution of certain rights, shall not be construed to deny or disparage others retained by the people. Amendment IX

These sovereign people shall be free to worship, speak, and publish freely.

Congress shall make no law respecting an establishment of religion, or prohibiting the free exercise thereof. Amendment I

Congress shall make no law . . . abridging the freedom of speech. Amendment I

Congress shall make no law . . . abridging the freedom . . . of the press. Amendment I

Voluntary association is the corollary of individual liberty, and this is emphasized, as well as the right of petition.

Congress shall make no law . . . abridging . . . the right of the people peaceably to assemble. Amendment I

Congress shall make no law abridging . . . the right of the people . . . to petition the Government for a redress of grievances. Amendment I

The old world divisions of mankind into castes and orders of rank are to be no more.

No title of nobility shall be granted by the United States. Article I, 9

Every citizen shall have a right to participate in the processes by which the nation is governed; and, should he desire to run for public office he shall not be put to a creedal test.

The right of the citizens of the United States to vote shall not be denied or abridged. . . . Amendments’ XV and X1X

No religious test shall ever be required as a qualification to any office or public trust under the United States. Article VI

Freedom to Trade; No Special Privilege

Commerce makes for a free and prosperous people, so restraints on trade shall be removed.

No tax or duty shall be laid on articles exported from any State. . . . Article 1, 9

No preference shall be given by any regulation of commerce or revenue to the ports of one State over those of another. Article I, 9

Progressive taxation violates the principle of equal treatment under the law—penalizes ability, and lowers productivity, so it is forbidden.

No capitation, or other direct, tax shall be laid, unless in proportion to the census. . . . Article I, 9

The public treasury shall be inviolate; government shall not confer economic privilege on some at the expense of others.

No money shall be drawn from the Treasury, but in consequence of appropriations made by law. Article I, 9

The right of the people to be secure in their persons, houses, papers, and effects . . . shall not be violated. Amendment IV

Conflict is a built-in feature of human action, and when collisions of interest do occur in society, the rights of the individual must be maintained.

No person shall . . . be deprived of life, liberty, or property, without due process of law. Amendment V

Nor shall private property be taken for public use without just compensation. Amendment V

Strings on the Military

In some nations, the civilian life is a mere appendage to the military. This will not happen here because civilians control the purse strings.

No appropriation of money (to raise and support military and naval forces) shall be for a longer term than two years. Article 1, 8

As a further safeguard against any future militarization of this nation, the civilian sector must have the means for defending itself.

The right of the people to keep and bear arms, shall not be infringed. Amendment II

In some countries, criminal proceedings are used to entrap citizens, whose guilt is assumed; the burden of proof is on them to show their innocence. Here, the innocence of the accused is assumed, until his guilt is proved. The law shall not reach backward to designate as criminal an action which until then was innocent.

There shall be no Star Chamber proceedings.

No person shall be held to answer for a capital, or otherwise infamous crime, unless on a presentment or indictment of a Grand Jury. Amendment V

The accused is protected against illegal imprisonment, and must be informed of the charges against him.

The privilege of the writ of habeas corpus shall not be suspended. Article I, 9

Punishment shall fit the crime; it shall not mean extinction of civil rights, forfeiture of property, or penalties against kin.

The accused is entitled to be tried by his peers.

. . . the right of trial by jury shall be preserved. Amendment VII

There is to be no forced self-incrimination.

Nor shall [he] be compelled in any criminal case to be a witness against himself. Amendment V

The rights of the accused are summarized:

2. Within the district wherein the crime shall have been committed;

3. to be informed of the nature and cause of the accusation;

4. to be confronted with the witnesses against him;

5. to have compulsory process for obtaining witnesses in his favor;

6. and to have the assistance of counsel for his defense. Amendment VI

Even when found guilty, the accused is protected.

1. Excessive bail shall not be required;

Treason is a crime against the nation, so serious that it must be defined with special care.

Treason against the United States, shall consist only in levying war against them, or in adhering to their enemies, giving them aid and comfort. Article III, 3

The person judged guilty of treason is personally responsible for his crime, and therefore his family and kin shall not be punished.

No attainder of treason shall work corruption of blood. Article III, 3

Impeachment is a special case.

The Senate shall have the sole power to try all impeachments . . . and no person shall be convicted without the concurrence of two-thirds of the members present.

Judgment . . . shall not extend further than to removal from office, and disqualification to hold any office of honor, trust or profit under the United States. Article I, 3

A blind spot in the original Constitution is corrected.

Neither slavery, nor involuntary servitude, except as punishment for crime . . . Amendment XIII

No state shall . . . deny to any person within its jurisdiction the equal protection of the laws. Amendment XIV

The separate states are not wholly sovereign.

No state shall enter into any treaty . . . coin money . . . pass any law impairing the obligation of contracts. Article I, 10

The Method of Freedom

There is a strong penchant in human nature which impels people who feel strongly about something—a good cause, say—to group their forces and use the power of government to fasten their panacea on those they’ve been unable to persuade. The Constitution is a prime example of the limitations placed upon governmental power so that people with a cause to advance must resort to education, persuasion, and example only. This is the method of freedom, and a people committed to the method of freedom find the Constitution still an apt instrument for structuring a society which maximizes freedom and opportunity for all persons. It was designed to establish a national government internally controlled by checks and balances between the separate powers. And government was to be further limited by the Federal structure itself, in which the centripetal power of Washington was to be offset by the centrifugal powers of the separate states.

The Constitution was not a perfect document, but it carried the means of its own correction, and it did embody the consensus of the people for whom freedom was the prime political good. It was workable. And it will work again whenever a significant number of people have the force of intellect to comprehend sound ideas, and the force of character to make them prevail.

Originally published in The Freeman. This article originally appeared in the April 1978 Freeman and was reprinted in September 1987 to mark the 200th anniversary of the completion of the writing of the U.S. Constitution.