Should Christians give thanks for Memorial Day? 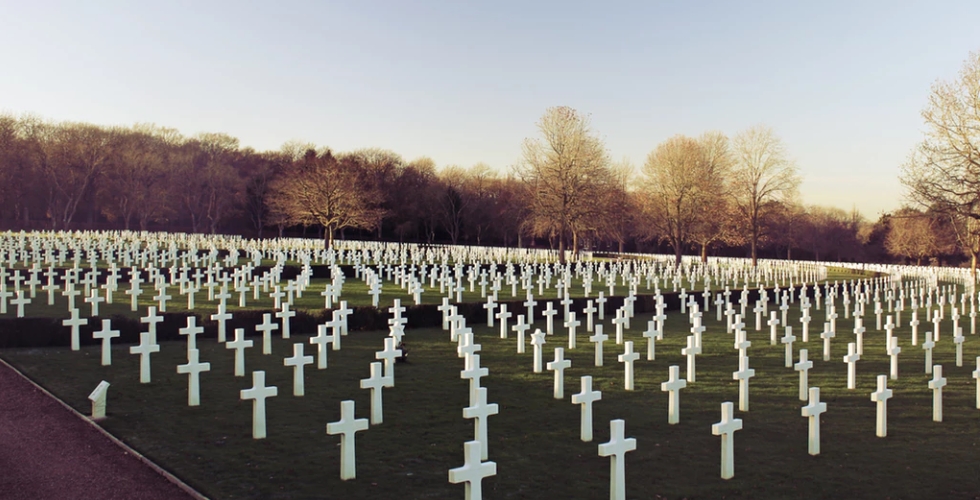 You’ve seen the post; the one that informs you of the differences between Memorial Day, Veteran’s Day, and Armed Services Day. You’ve also seen reminders that these aren’t three-day weekends for BBQ and beer, so remember that your rights are bought and paid for by the blood of dead soldiers.

Kevin DeYoung recently wrote a blog post at The Gospel Coalition titled, Why Christians Should Give Thanks for Memorial Day. As a Christian libertarian veteran, this post made me ill. There are so many things wrong with it.

This is not the first time DeYoung has mythologized the military, but in his most recent article he gives Christians five reasons to be thankful for war, even despite his initial caution of the confusion of the Kingdom of God with civil religion. He glorifies military service as a vocation, “when executed with integrity and in the Spirit of God.” But how much integrity can one have when being involved in war crimes, coverups, propaganda, all of which wreaks havoc for families at home? Lip service is paid to disobeying illegal orders, and when someone finally does they’re persecuted for “putting the lives of our military at risk.”

DeYoung also defends the military life as showing the highest Christian virtue, but aside from war crimes overseas, I wonder what he thinks about the rampant domestic abuse and sexual violence taking place here at home. Only last year did the US Military finally make domestic violence a crime under the Uniform Code of Military Justice.

Finally, he believes, in the end, the facts of history will show the US Military was a force for good in the world. I wonder if he knows about this, this, this, this, or this?

The US Army posted a positive tweet asking for responses about how military service has impacted our lives. The replies were astounding. I didn’t see a single positive response. All the responses where how the military destroyed our lives or the lives of those we love. The Army’s response was to say sorry and “here’s the suicide hotline.”

While I’m a non-combat veteran, one of my brothers and my father served in combat and have PTSD and other injuries. Balancing my anti-war stance with how they need to cope and heal is a perpetual tightrope act. I love them dearly but I hate war and I find the actions of US foreign policy and the military that carries out those orders to be deplorable. I find it reprehensible that this violent militarism is justified with the constant reminder it “put food on my table and kept a roof over my head.” (Nevermind the usual “soldiers fought for your freedom” nonsense).

In a tiny little, hard-to-find book called, The State in the New Testament, early church historian and theologian Oscar Cullmann points out that, “Christ regarded as expressly satanic the understanding of the Messiah … which involved a confusion of the Kingdom of God with an early form of the State aimed at world domination.” And since Christ has such regard for the State, that we too cannot take part in or uphold governments who seek such domination, especially when such domination is done in the name of Christ.

Again Cullmann states, “The Gospel knows nothing of that confusion of the Kingdom of God with the State [and instead] oppose(s) the theocratic ideal of Judaism with the same sharpness with which it resist(s) the totalitarian claim of the Roman State.” Cullmann was referenced by the late Dr. R.C. Sproul in a lecture as having the best Christian perspective of the relationship between church and state. Sproul has also cited Francis Schaeffer as saying that Statism is one of the biggest threats to Christianity today.

The Christian response isn’t one that quietly watches others exploit the name of Christ to justify violence and wars of aggression. This doesn’t necessarily mean ripping veterans or their memories to shreds. I still hold the federal government primarily responsible for not only lying about their interventions, but also the psychological abuse and manipulation perpetuated to gain recruits. But it is time we call church leaders like DeYoung to the carpet.

War is socialism. Steven Horwitz has a wonderful article on FEE about how central planning is the militarization of the economy, and that militarism is just socialism. This doesn’t mean we have to be pacifists. There is no reason in the world why groups of people cannot act in voluntary, cooperative, self-defense. But the US Military is not and has not been acting in self-defense.

What’s strange is that, for minarchists and libertarian-leaning Republicans, this is the hill they are unwilling to climb. To some degree, it makes sense. This was also my last holdout before finally crossing over to a strong anti-war position. And yet, the actions of the US military, under the direction of US Foreign Policy is so anti-libertarian and utterly totalitarian. We need to remember that just because we don’t want a thing done by the state, doesn’t mean we don’t want a thing done at all. There are better defense alternatives to the strategies our government has in place.

I know many anti-war people who did not serve who don’t enjoy thanking veterans and military members for their service. But did you know that there is a large chunk of veterans who don’t enjoy hearing it? In fact, anti-war vets would rather crawl into a hole on each respective “military appreciation day” because it’s a reminder of the lies, the pain, the suffering, inflicted on us, on our friends, and by us on those who didn’t deserve it. So I will suggest a different response for libertarian Christians on these days.

On Memorial Day: Have discussions about the number of dead soldiers and civilians at the hands of the state, endless interventions by the US especially at the hands of the CIA. Discuss the concept of blowback and the reality that the people fighting us aren’t doing it in a vacuum or because we’re rich and free (that’s a lie!).

On Veteran’s Day: Reach out to private citizens groups helping vets who’ve been screwed over by the system. Discuss the numbers of veterans who’ve suffered PTSD, committed suicide, and the families that were abused by those vets who couldn’t get control of themselves. Should we have conversations about the Nazis, and the Soviets, and the Koreans? Yes! Absolutely. We’re repeating their history.

On Armed Services Day: Discuss the daily numbers of casualties, “conflicts” (undeclared war), the propaganda being used for recruitment, foreign policy measures passed in the name of national security, which have eroded our civil liberties. Discuss with current members of the military about the war crimes by the US Government and when it’s appropriate to disobey unlawful orders. (When I was in, they still taught us that it was our duty to disobey unlawful orders, orders that violated our oath to the Constitution).

How much of your life has been spent with the US at war? Stop mythologizing “the troops” and stop making excuses for not speaking up. Two people are in prison for providing some of the information found in this article.

PrevPrevA Sit Down with the Nanny State (or “Democratic-Socialism”) Part III: Democracy, Socialism, and Freedom
NextEp 119: Growing up (with) RC SproulNext