The Flag is a Coffin Veil 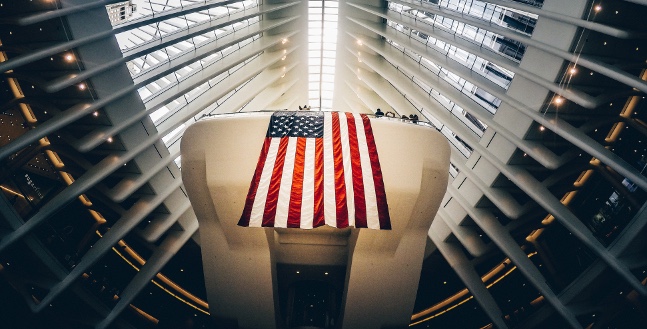 “Now from the sixth hour darkness fell upon all the land until the ninth hour. About the ninth hour Jesus cried out with a loud voice, saying, ‘ELI, ELI, LAMA SABACHTHANI?’ that is, ‘MY GOD, MY GOD, WHY HAVE YOU FORSAKEN ME?’ … And Jesus cried out again with a loud voice, and yielded up His spirit. And behold, the veil of the temple was torn in two from top to bottom; and the earth shook and the rocks were split. The tombs were opened, and many bodies of the saints who had fallen asleep were raised; and coming out of the tombs after His resurrection they entered the holy city and appeared to many.” – The Gospel of Matthew 27 (New American Standard Bible)

Jesus is being crucified, surrounded by a jeering mob squeezed of any ounce of human empathy by the power of collectivist-think. The snowballing effect of persecution has caused even his followers to flee in fear and silence as he suffered. Jesus quotes a lyric from a famous Psalm lyric, what would be the equivalent today of quoting a Leonard Cohen lyric “Hallelujah! Hallelujah!” as your haters laughingly torture you to death. Mussolini experienced this. So did Gaddafi. As scapegoats, they were innocent of their society’s total sin complex, but guilty of particular grave evils. Still undeserving of such leering violence. But why would we care? We don’t see any of it. We’ve got 401k’s to manage, piano classes after school, resumes to build, bathroom politics to fight over, and kale pre-made salad packs to buy. Who cares?

What was also different about Jesus from all other scapegoat-kings, ancient and modern, is that he forgave his torturers during the act. He knew they had the words of Caiaphas, the High Priest, coursing through their veins, “It is better that one man die than the whole nation perish.” Just who did this different one think he was, claiming to be Son of Man? He made people look bad and might get everyone killed by the Romans. So to stave off their imagined chaos, they made him take one for the team. And they enjoyed it. Just like we enjoy sticking it to the 1%; the drug user; the ugly-looking driver with a suspended license on trial or any other victims that run afoul of laws we vote for that use physical violence—financial confiscation or imprisonment—for nonviolent behaviors.

After Jesus dies, the veil of the temple is torn. The temple was the center of his culture’s world. It was everything. Behind that veil, the High Priest performed blood sacrifice on animals for the atonement of the people’s collective sins. It was sacred. You did not question or touch that. Now the veil is ripped in half to reveal an empty room. No one is home. Suddenly, people across the city report encounters with saints raised from their tombs. What’s going on here? Consider a flashback in the life Jesus:

“Woe to you lawyers as well! For you weigh men down with burdens hard to bear, while you yourselves will not even touch the burdens with one of your fingers. “Woe to you! For you build the tombs of the prophets, and it was your fathers who killed them. So you are witnesses and approve the deeds of your fathers; because it was they who killed them, and you build their tombs. For this reason also the wisdom of God said, ‘I will send to them prophets and apostles, and some of them they will kill and some they will persecute, so that the blood of all the prophets, shed since the foundation of the world, may be charged against this generation, from the blood of Abel to the blood of Zechariah, who was killed between the altar and the house of God; yes, I tell you, it shall be charged against this generation.’ Woe to you lawyers! For you have taken away the key of knowledge; you yourselves did not enter, and you hindered those who were entering.” – The Gospel of Luke 11 (NASB)

The lawyers, the ones who interpreted and codified the law of Jesus’s nation, were in fact, accomplices in murder. Murder against prophets, saints, who exposed the folly of the logic of sacrificial murder and domination-as-unity. The key to knowledge they tried to hide from people was that God loves us and does not require blood sacrifice to do so. We did. We, in our attempts at preserving unity in our communities, would place our collective sins onto the backs of a misfit, preferably a smelly he-goat but more often than admitted, a human, and cast them out or kill them. It created the same “relief” we feel today when we watch the bad guy get destroyed in a Hollywood drama. Or, watch a police with lights behind us, turn and rush past us, tacitly acknowledging our membership in the “nothing to see here” good citizen tribe.

“Nobody should be allowed to burn the American flag – if they do, there must be consequences – perhaps loss of citizenship or year in jail!”

His vanquished foe in the Voting Rite of Passage on November 8, would-be Scapegoat Queen Hillary Clinton, had tried to enact such a law in 2005 which called for a $100,000 fine or one year in jail for anyone who burned a flag in protest.

Our nation, in the year 2016 AD, cast 128,000,000 vote-of-hires for two individuals who agreed that human beings should be cast into cages or robbed for burning a symbolic flag. Cages where they winkingly-wincingly know violence and rape are possible. For burning fabric. And you think we’ve reached some secular post-religion, enlightened state?

What happens when someone burns a flag? Once the symbolic fabric is burnt, there is nothing left but ashes on an empty space. No one is home. When the veil was torn at Jesus’s death, the narrative reveals “No one is home” in the place where blood sacrifice was burnt and demanded for social order and unity.

As a morning drive radio host echoed Trump’s stance: “The flag is the one symbol we have that unites us all.” When it’s burnt, the collective coffin it conceals is exposed to molestation in the minds of those who have faith in the state. This creates severe cognitive dissonance in those who rest their faith in the nation-state to provide them unity with their neighbor.

Unites us as one body! One body united by the vicarious sacrifice of all the thousands of soldiers live bodies, torn asunder, under that flag. Those young boys used to play in the yard with their papas and moms. They used to look into the eyes of their grandmother, searching for the wisdom of the universe in their glimmer. They used to feel the warmth of their mothers’ embrace after a dark night of thunder storms. They used to hold their little sisters’ hands as they crossed the road, protecting them from hulking cars or beasts of burden flying past just feet away. And now these bodies lay in rest like seeds planted in the ground after their fruit was consumed for the life of a body.

Deep in the sea of soldiers’ coffins, draped in the same Flag, their bodies were offered up for the preservation of our nation’s body. Their courage in the face of danger, in the noble belief that they must give their life for the preservation of our collective body, is a tangled mess of both Caiaphas’s and Jesus’s logic. Jesus said “God desires mercy, not sacrifice” but conceded in his action that sacrifice will happen because humans demand that someone put skin in the game to keep the peace. To Jesus, let it never be your neighbor’s life for your own gain and peace of mind. If sacrifice must take place to keep peace, let it be your own life before consuming the life of another.

Yet our national body, like all others, demands blood sacrifice in times of stress. It demands it in vain. Virtually all of the wars waged by this nation were wars of unnecessary intervention bred by past unnecessary interventions. Yet the nation found it a sacred, untouchable calling to offer the blood sacrifice of its youngest, most virile members in order to feel as “One, indivisible.”

Jesus’s death tore the veil. Today flag burners, enact a violent perversion of this act, by burning the veil over the collective tomb that our pagan-dreaming-but-awakening nation has used to preserve its unity and sense of self. By burning the coffin’s veil, they are not using Jesus’s humble self-sacrifice to expose the folly of sacrifice of an other. Rather, they’re “burning in effigy” the collective coffin’s veil. It is a symbolic act violently resisting the power of the nation. But Jesus said to not resist evil with violence.

Even in the way we symbolically perform our protests against the state-cult, we must perform nonviolent symbolism not aggressive, resentful acts like burning effigies. At the same time, those most angered by flag burning would do well to consider that Jesus has torn the veil of humanity’s old, broken sacrificial system. The line between sacred and profane built on the blood of Others is over. Some just refuse to get the memo and want to cling to the old sacrificial way of doing things. But it is simply incompatible with imitating Jesus. We do not get to sacrifice other people—ours, our neighbors’, or our faceless foreign bogeymen’s children—for our sense of security and peace. We do not get to turn our face and wash our hands of the violence we commit when we press a button in a hidden voting booth for the perpetuation of laws that use deadly force against misfits for nonviolent acts, whether it’s economic greed or personal vice.

Adults, aka people who want to imitate Jesus, don’t hit people to get their way. And they certainly don’t put people in animal cages—rife with PTSD and assault—they themselves would not want to be forced into for nonviolent vices. Do unto others…

Don’t burn the flag. It perpetuates and mirrors the violence-based logic that gives it such magnetic power over the minds of millions. Don’t put people in cages that burn flags. Don’t worship or scapegoat flags, and the sacred power systems that use them. They’re dying. The Cross pierces the veil and as such our human sacrifices are being raised in our nation’s heart. Their visitation of our conscience reveals the need for no more bloodshed for reconciliation between neighbors. It is finished. The veil is torn.