10 Reasons Why the Future of Liberty Runs Through Rene Girard 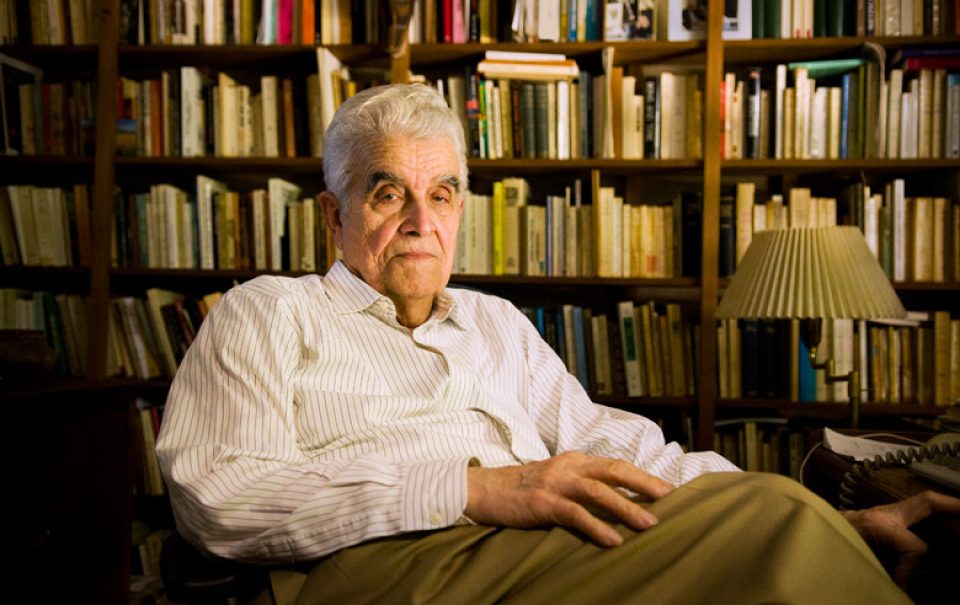 Ever reach that long sought after job promotion, dream vacation, new smartphone, sports car, public recognition, or desired weight only to feel a kind of emptiness, a dread that the itch you thought the status or object you acquired would scratch hasn’t been satisfied?

You don’t want what you want because you really want it. You want it because someone else—either in your past, or in a piece of media you consume, or a peer you know—appears to have it. Most of the time, we desire what our neighbor desires, not out of some value inherent in the object of our desire, but because our neighbor has it.

Have you seen two children play in a room? The moment one kid grabs a particular toy the other child immediately wants it desperately. It doesn’t really matter if there is an exact duplicate of said toy nearby, the child often becomes absolutely fascinated, obsessed with the object his neighbor has. The first child may have picked it up rather nonchalantly, but now that his peer desires it desperately, it kindles more desire for keeping the toy to himself.

This lightning strike of mirror desires creates an irresistible obstacle, a passionate tug of war that eventually ends in tears, screams and violence—a scratch triggers a slap—unless an adult intervenes or a hapless passing puppy dog’s tail appears ripe for both of their picking. Suddenly, the shiny toy, their universal center of all existential desire and passion becomes absolutely nothing as they unite around a new common pleasure of tormenting the poor pup.

This is the story of what it means to be human. It is the story of why we humans learned to survive and to create vast civilizations filled with technologies, monuments, rules, and rituals. It is the story the late anthropologist Rene Girard, who died in late 2015 near his home university of Stanford, devoted his entire life to develop and explain. Girard has been called the Copernicus of social sciences, and his legacy—what he calls Mimetic theory—continues to rattle diverse fields of study from psychiatry to neuroscience, theology to literary analysis, economics and political science. A member of the Académie française (a society of the top forty intellectuals of France), Girard’s work on contagious violence, the origins of religion, and human desire remains intensely relevant for our time.

I’m convinced the best natural political home for Girard’s Mimetic theory—although not a perfect fit—is the liberty movement. By liberty movement, I mean the growing community of people animated by the political principle of nonaggression, the notion that one cannot initiate violence against another person. The only role for force—which can devolve into violent reciprocity but is not inherently violent—in the nonaggression principle is that of self-defense from violence such as theft, fraud, or physical violence. (Note that defensive force is ethically permissible, not always necessarily wise or prudent.)

For Girard, violence is contagious. Because humans are mimetic, that is, they desire that which their neighbor desires or displays, rivalry over objects or status is inevitable. This rivalry eventually spills into violence which, again, humans being the masters of imitation, is highly contagious. The way archaic human communities accidentally solved our unhinged finger pointing and violent retaliation was the spontaneous turning of every pointed finger to a common enemy. This common enemy could be disabled, disturbed, physically ugly, too beautiful, rich, poor: any difference that makes a person or group stand out from the increasing frenzy of mirror similarities that inevitably define rivalrous communities locked in conflict.

Archaeological evidence across the globe gives us a clue as to what happened next. Signs of cannibalism are ubiquitous in ancient remains. Communities would lynch and often consume the chosen enemy. This mimetic unification of the community created a sense of transcendent relief, what we experience as catharsis when the bad guy is defeated in a movie theater or political campaign today. Suddenly, a community on the verge of devouring itself has found a form of atonement, an at-one-ment with each other and a relief from pent up shame and tensions, by the solidarity of devouring the common monster.

The common enemy—what we now call a scapegoat thanks to the Bible—is sometimes even perceived to have magical or divine powers. Who else among mere mortals could have united enemies and restored order in society? Perhaps that tell of difference—the crooked nose, twisted gait, stunning beauty, dwarfish, or abundant riches—was actually a sign of divinity. Their death has become a precious antidote to maintaining order, quieting fears, and settling minds filled with paranoia.

At first, the common enemy is scandalized by an accusation of abnormality in appearance or behavior , but is then paradoxically glorified after his lynching mimetically unites and orders society. This paradoxical nature is often reflected in the universal capricious nature of ancient mythological gods. Pick up an anthology of myths and read it: time and time again you will find accounts of gods that have egregious pasts, filled with mischief and taboo behavior: one killed their parent, another mated with a bull (minotaur), still another has a limp leg. Somehow, the god-figure managed to bring order to society in times of trouble, especially after receiving a sacrifice. Universally, gods are found creating new order out of dying and rising.

These mythological accounts, found worldwide, are murder cover ups. Archaeology shows that human sacrifice shows up universally right behind cannibalism. Since humans are prone to fits of mimetic violent obsession, communities around the world begin to recreate a controlled reenactment of the founding murder. Taboos form around these sacrificial rituals that seek to keep at bay a crisis of mimetic mirroring from breaking out again. These taboos often have to do with boundaries that maintain difference: don’t steal, don’t sleep with your sister, don’t punch above your status on the social hierarchy, the rules of ancient religion are about preventing chaotic violence that occurs when people lose sense of their being and distinction, especially during times of famine or crisis. That is why, historically, rituals are often accompanied with feasts and orgies, events where people are allowed in a safe and orderly window of sacred time, to repeat the mimetic chaos that resulted in the need for sacrificial order.

The universality of religious taboo and mythology is proof of the universality of man’s propensity for chaotic reciprocal envy and revenge that occurs with a loss of difference. Far from being the cause of violence, religion is what allowed us to survive our own violence. By channeling our need for finger-pointing and blood into a controlled sacrifice, religion kept our species from careening into the ash heap of history.

Religion and mythology—with the noble lie that our evil was out there, that our monsters were over there and that sacrifice was a divine transaction, not of ourselves, but to satisfy the demands of the gods of our ancestors, victims themselves whose collective oral memory distills into transcendent beings whose death-resurrection-vindication cycles require sacrifices to commemorate—birthed us. It’s our safety valve; our circuit breaker from the lightning strike of mimetic violence.

Like a rebellious teenager who believes they can ignore home after acquiring an autonomous self, modern society does not want to acknowledge our mother. We act as if that mother is totally different from us, that her views and habits belong to history books and museums. As an adolescent species we do not want mother to call or pick us up from the dance. However, our attempts to differentiate ourselves from mother, to disown her, only make us more like her, but worse. So as mankind “rid” itself of mother Religion during the Enlightenment it turned around and to sacrifice thousands in the French revolution. We witnessed millions of human sacrifices during World War II to the nation-states involved. And millions of persons who violate the shared taboos of the majority continue to have the fruits of their labor stolen and their bodies cast out into cages for speech code violations and other nonviolent vices.

Despite how intellectual and independent we believe ourselves to be, we are still addicted to sacrifice. Our ideologies and nation-states still demand a common enemy that must be violently expelled to maintain themselves. We are religious, but we are ever more blind and polyamorous to the gods we serve. That transcendent sense of total oneness we get with a group when casting out a shared enemy is present but ever more fleeting. At the same time, we are more aware than ever of victims and the need to protect those most vulnerable in times past to sacrifice: the disabled, poor, ethnic minorities, sexual taboo breakers, even animals.

Free from the taboos of mother religion, we are obsessed with eliminating all difference: no one can claim to be exceptional, or be too rich, too fit, too religiously zealous, or culturally preferred without facing shame and exclusion in the West. This elimination of difference only creates more envy and rivalry as the status-jockeying of ancient elites is opened up for all to vie. So, sacrificial violence continues to return for ever-fleeting order while we stamp out more primitive, openly grotesque forms of it.

Something happened in history which dethroned the old kinds of religious orders. The mythic peace founded on seasonal cycles of sacrificial violence has been disturbed by a modern consciousness rife with both paralyzing cynicism and progress-oriented futurism. Capital and technology has produced tremendous wealth, but it also has produced envy and the need to scapegoat new enemies—those misfits that rebel against our new guilt-racked, self-critical global complex: The New World Order of Victimocracy.

In this present paradigm, we still have a choice: either renounce violence as the glue that holds our social order together, or unravel into boundless chaos as our feeble unconscious attempts at returning to sacrificial violence continue to breakdown. In my next article, I will describe what historical event created this reality and why imitation of its founding offers a way of life the liberty movement can contagiously spread.

For now, to fulfill the promise of what has become the most non-clickbait numerical list article in Internet history:10 Reasons Why the Future of Liberty Runs Through Rene Girard and Mimetic Theory:

Did you like 10 Reasons Why the Future of Liberty Runs Through Rene Girard?
You may also like These Posts: