The Gotthard Tunnel Ceremony Reveals the Aesthetic of Statism 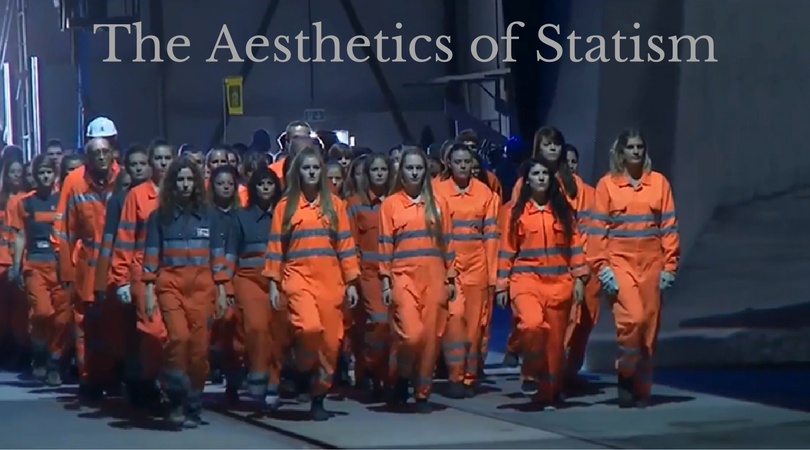 A friend recently sent me a video to the Gotthard Tunnel opening ceremony in Switzerland that took place on June 1, 2016. The world’s largest tunnel, it took 17 years to complete and promises a new era of state managed European and global connectedness. As such, European heads of state such as France’s Hollande, and Germany’s Merkel as well as cronies of capital and finance were on hand to take the virgin tunnel voyage and celebrate its completion.

An innocuous ribbon cutting ceremony for an impressive engineering feat. Maybe this story could be a light change of pace. Imagine my face, then, when I discovered that the 9 million dollar opening ceremony was filled with paganistic rituals of pre-Christian Old Europe. Rapturously applauded by standing global bureaucrats and prime ministers, the ghastly production was an unintended self-parody on statist culture.

A quick web search on the Gotthard tunnel opening will produce a few confused media reports as well as several homebrew satanist decoders unlocking every symbol as part of a deliberate global conspiratorial wink at hapless citizens. Alleged satanist new world order symbology is out of my field of interest and understanding.

Instead, I see the ceremony as a great opportunity to shed light on the aesthetic of statism.

Life Sacrifice for the Collective

Eventually, a goat demon, resembling the ancient Baphomet idol, emerges from the tunnel and proceeds to mock a carried lamb, a symbol of Christ. The play graphically depicts miners dying as sacrifices to the goat demon. The goat demon ends up mounting and mating with the spirits of the dead miners as well as receiving their worship. The goat is robed in white, dies, and resurrects as a red cloaked woman giving birth to empty-faced dancing dolls.

Here’s the thing. Nine miners actually died during the construction of this tunnel. Let that sink in for a moment. Angela Merkel and other heads of state give a standing ovation to a ceremony in which actual miners’ deaths are commemorated as necessary sacrifices for the completion of their grand public works project. You know, like little pharaohs.

These miners were human beings with families, wives, and children. And they’re being depicted as mindless sacrifices mated by ancestral pagan gods of the Gotthard region. Of course, the media doesn’t care to consider this reality; these folks are too little to matter to power-dazzled media outlets.

In the aesthetic of statism, absolute power is the greatest good. Violence is a sacred rite to be performed by those with a monopoly on power, the state and its corporate cronies, to preserve their order and grandeur.

As I watched the ceremony, I realized it was virtually the same as ancient cornerstone rituals, so common of ancient civilizations. Scapegoats, human sacrifices, must be offered in the foundations of a new state project to ensure the community maintains its cohesion and power. Knowingly or not, these modern statists were celebrating the very rituals of which the state itself is a vestige.

Faced head on, we as a society find this kind of brazen celebration of sacrificial violence increasingly pathetic and ugly. The reason for our growing distaste for such power displays lies in the personhood revolution Jesus started 2000 years ago.

The aesthetic of the crucifixion meme suggests ultimate power resides with the powerless, the scapegoats and misfits, consigned to die outside our cities for the resentments and power-envy of the masses. This aesthetic, imperfectly embodied in fits and starts by us in art, music, meals, and self-emptying living is like an acid eroding the aesthetic of the state.

The more our culture steeps in the cross, even when it consciously rejects the Church, the more we feel that each person deserves dignity, no matter how small or weak. We begin to see that we perform a lie when we cage nonviolent people, the imprisonment falsely accusing them of the violence of which we are guilty in placing them there. We experience this aesthetic as we slowly lose our appetite for power at the expense of others from the images of endless wars, drone strikes, and police killings we see.

Indeed, the Gotthard Tunnel ceremony is itself a childish attempt at thumbing statist noses at Jesus’s cultural aesthetic and its power to weaken strong structures wherever its story spreads.

A look at the Gotthard mountain region’s past reveals another goat narrative at odds with the ceremony: a thousand year old folk tale.

In this legend, Swiss herdsmen attempt to construct a bridge over the perilous Gotthard mountain pass. Many lives were lost in the rapid rivers and heights below the bridge. In an attempt to ensure safety, the pagan rooted, recently Christianized Swiss attempt to make a deal with the Devil. He offers to ensure the construction of the bridge under the condition that he claims the first soul that passes over it. The Swiss, like all tribal cultures that encounter the Christian aesthetic, have lost their appetite for human sacrifice. They accept the deal but trick the devil by sending a goat over instead.

Enraged, the devil attempts to hurl a giant stone at the bridge in revenge. But a woman paints a cross on the rock and the devil is unable to move it. This devil’s rock stood in Gotthard Pass as an enduring symbol of Christian aesthetic until the 220 ton boulder was removed in 1977 to make way for a Gotthard road tunnel construction.

The Grasping for Glory

The message of the 2016 Gotthard Tunnel ceremony is clear: the adolescent statists are rebelling against a more mature cultural aesthetic whose power they envy. See, we moved the rock. We master the Earth. We have the power. And we’re not afraid to sacrifice humans to get more of it.

And lest we think of this as some foreign European aberration, every statist culture echoes this rebellious yearning for our old ways of ordering our societies on collective sacrifices. What does that star spangled banner wave over, anyway? Francis Scott Key saw the soldiers’ lives as noble sacrifices for the glory of the nation whose enemies’ “blood has washed out their foul footsteps’ pollution.”

Let’s not be so superficial that we scapegoat the surface symbols like a flag, ceremony, politicians or rival ideologies. The desire to step on others in our grasping for glory is universal. The state worships this dogma. Jesus rejects it by forgiving his enemies even though they slay him.

Our job is to embody the aesthetic of nonviolence in how we treat one another. Stand with the victims of sacrificial violence. Tell their stories. In our weakness we are made strong.

Did you like The Gotthard Tunnel Ceremony Reveals the Aesthetic of Statism
You may also like These Posts: