Should Adultery and Fornication be Criminal Offenses? 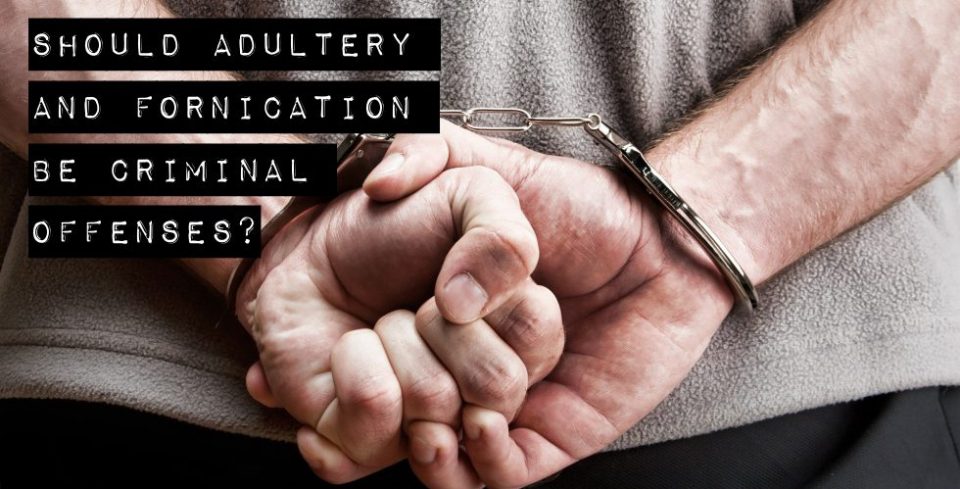 Like most Islamic states, some states in America use criminal penalties to police the morality of their citizens.

A recent attempt in Virginia to decriminalize adultery by reducing it from a criminal issue to a civil one has failed. According to the Code of Virginia, Title 18.2, “Crimes and Offenses Generally,” Chapter 8, “Crimes Involving Morals And Decency,” §18.2-365, “Adultery defined; penalty”:

Any person, being married, who voluntarily shall have sexual intercourse with any person not his or her spouse shall be guilty of adultery, punishable as a Class 4 misdemeanor.

A Class 4 misdemeanor is the lowest-level criminal offense in Virginia, and has a maximum punishment of a $250 fine.

Virginia senator Scott Surovell, a Democrat from Fairfax County, has been trying for years to get rid of his state’s anachronistic adultery law. “Clearly, Virginia is outside the mainstream on this,” he said. “The law is hardly ever enforced,” he added, as well as raising this point about divorce proceedings: “Having the criminal law on the books complicates divorce proceedings because spouses suspected of adultery often invoke their Fifth Amendment shield against self-incrimination, fearing a criminal prosecution. Without an admission, adultery is hard to prove.”

According to the Virginia Criminal Sentencing Commission, only eight people have been convicted of adultery statewide in the past 10 years.

In January, Senator Surovell offered a bill (SB174) “to amend and reenact §18.2-365 of the Code of Virginia, relating to adultery; civil penalty.” Here is his proposed revision:

Any person, being married, who voluntarily has sexual intercourse with any person not his or her spouse is guilty of adultery, and is subject to a civil penalty of not more than $250, which shall be payable to the Literary Fund. Any law-enforcement officer may issue a summons for a violation of this section.

The bill failed after minimal debate in a Senate committee. Some notable Democrats even voted against it.

In recent years, thirteen states have repealed similar adultery statutes. Only about a dozen states still have laws on their books that regard adultery as a crime. Virginia may be for lovers, but Virginians better love just their own spouses lest they be deemed a criminal. And should any adulterous lovers in Virginia decide to move to Florida to cohabitate, they will be deemed criminals there as well.

According to Florida Statue 798.02 regarding “Lewd and lascivious behavior”:

If any man and woman, not being married to each other, lewdly and lasciviously associate and cohabit together, or if any man or woman, married or unmarried, engages in open and gross lewdness and lascivious behavior, they shall be guilty of a misdemeanor of the second degree, punishable as provided in s. 775.082 or s. 775.083.

Although bills to repeal this cohabitation ban died in both chambers of the Florida Legislature last spring, new bills have been introduced in the Florida House (HB4003) and Senate (SB498) to overturn the state’s 1868 ban on cohabitation. “An act relating to the repeal of a prohibition on cohabitation; amending s. 798.02, F.S.; deleting provisions prohibiting cohabitation by unmarried men and women; providing an effective date,” would delete the first provision on cohabitation while retaining the second provision on engaging in “open and gross lewdness and lascivious behavior.” The revision would “take effect upon becoming a law.”

Clearly, some legislators are reluctant to repeal such laws for fear of alienating their constituents. There must, therefore, be more than just a handful of people in America who favor such laws.

The question before us, then, is whether adultery and fornication should be criminal offenses.

Before proceeding I should say that, as a Bible-believing, theologically conservative Christian, I neither recommend nor condone adultery, fornication, open marriage, indecency, swinging, premarital sex, sodomy, lewdness, lasciviousness, uncleanness, shacking up, or cohabitation. I believe such things are wrong, immoral, unethical, sinful, bad, evil, wicked, depraved, and not a very good idea.

I hate to be so tedious and redundant, but if I am not (and in some cases even if I am) then some of my Christian brethren will smear me as a liberal, a moderate, a compromiser, a freethinker, a libertine, a sellout, and/or an antinomian who approves of these things. I approve of none of these things. I approve of holiness, decency, morality, wholesomeness, the sanctity of marriage, purity, modesty, discipline, chastity, and self-control.

Now that we have gotten that out of the way, we can look at the question: Should adultery and fornication be criminal offenses?

They shouldn’t. Of course not. Absolutely not.

I want to briefly say ten things about this.

First of all, states have a tremendous number of old, archaic, outdated, anachronistic, obsolete, and antiquated laws that in most cases should never have been passed in the first place—including laws against adultery and fornication. States should be repealing these laws, not keeping them in place or passing similar ones.

Second, vices may be immoral, they may be bad habits, they may be foolish, and they may be sinful, but vices are not crimes. As the 19th-century classical-liberal political philosopher Lysander Spooner so eloquently explained it: “Vices are those acts by which a man harms himself or his property. Crimes are those acts by which one man harms the person or property of another. Vices are simply the errors which a man makes in his search after his own happiness. Unlike crimes, they imply no malice toward others, and no interference with their persons or property.”

Third, is prosecuting and investigating acts of adultery or fornication really what we want the police doing? Law enforcement agencies and court systems are always clamoring for more money to enforce the laws and keep dangerous criminals off the streets. How much are taxpayers willing to fork over to the cops to arrest people for committing adultery or fornication? Real crimes that violate personal or property rights should be enforced to the fullest extent of the law. Prosecuting people for victimless crimes is a waste of time and money.

Fourth, as a practical matter, laws against adultery and fornication are almost impossible to enforce. And they have to potential to literally make millions of single adults criminals.

Fifth, the proper role of government is supposed to be to protect people’s life, liberty, and property from the violence or fraud of others. The only legitimate purpose of government is to prosecute and punish those who initiate violence against others, commit fraud against them, or violate their property rights. It is simply not the business of government to keep people from vice, sin, bad habits, immoral practices or activities that take place between consenting adults.

Seventh, laws that prohibit and prosecute the non-crimes of adultery and fornication are also impossible to reconcile with a free society. In a free society, behavior that some consider to be immoral, unsafe, addictive, unhealthy, risky, sinful, or destructive is neither the government’s business nor the business of puritanical busybodies. In a free society, there is no such thing as nebulous crimes against nature, society, the family, the institution of marriage, or the state. Every crime would have a tangible and identifiable victim.

Eighth, Christian morality crusaders are woefully inconsistent. They would never call for all sins in the Bible to be crimes, just the ones they themselves don’t commit, or at least no one knows about. What about the “seven deadly sins” of wrath, greed, sloth, pride, lust, envy, and gluttony—should they be crimes as well? Why not? If all sins were crimes, then everyone would sure be in trouble, including Christians.

Ninth, from a theological perspective, there is no warrant in the New Testament for Christians to support laws against adultery and fornication. This is because there is no support in the New Testament for the idea that Christians should seek legislation to criminalize any victimless crimes. It is not the purpose of Christianity to change society outwardly; it is the purpose of Christianity to change individuals inwardly.

And finally, religious people in particular make a grave mistake when they look to the state to enforce morality. The actions of the state are generally the greatest examples of immoral behavior that one could ever think of—and on a grand scale. It is not even the purpose of religion to use force or the threat of force to keep people from sinning. A government with the power to outlaw immoral practices is a government with the power to ban any practice.

I have deliberately been brief. This is because I am not saying anything that I haven’t already said in more detail in my articles on victimless crimes, including my articles on gambling, and especially my many articles on the evils of the drug war.

There is a huge difference between opposition to adultery and fornication and opposition to laws against these things. Don’t ever make the mistake of confounding the two.