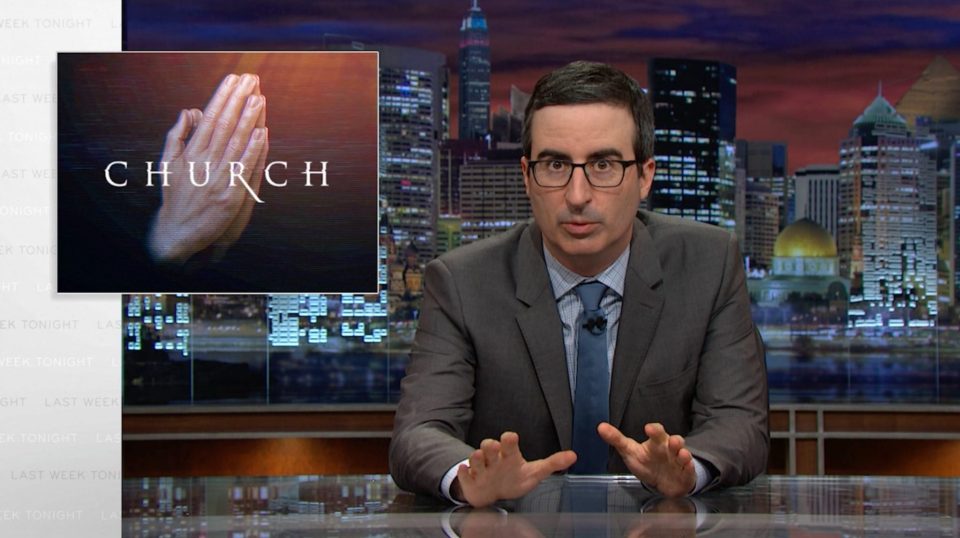 This guest article is by Addison Quale.

John Oliver’s HBO program “Last Week Tonight” has certainly made a name for itself the last couple of years, exposing the inconvenient truth with respect to a wide variety of issues –from America’s frightening infrastructure problems to the corrupt Miss America Pageant. Oliver often makes some great points and does the public a great service – in a very humorous manner of course. Recently, however, in exposing the practices of unscrupulous televangelists, he swung hard and missed – quite badly.

Let’s face it. America’s televangelists are a pretty easy target. Being religious, and principally Christian at that, they are already fairly politically incorrect and ripe for the poking. And John Oliver holds no mercy for them as he skewers these shameless pastors who prey on the good nature of their followers in order to line their pockets with millions of dollars. They preach to their congregations: “Sow a seed today, reap a harvest tomorrow!”

The seed of course is cash. Give us cash today, they say, and God will bless you with much more wealth in the future. Wealth, after all, is proof of God’s blessing on your life. They might even say, “Forget about that expensive chemotherapy treatment. Give us the money and God will certainly heal your cancer!” Oliver goes on to tell the audience of his own correspondence with a particular televangelist by the name of Robert Tilton who guided him over the course of 26 weeks (and letters) to show his faith by giving more and more and more.

To be sure, in this exposé Oliver has once again shined the light on some dark practices that are incredibly poor representatives of Christ’s body here on earth. But in the process of calling attention to their shameful practices, Oliver makes a big mistake: He brings up the IRS.

Oliver happens to research how the IRS handles the tax exempt status of churches and bemoans how these televangelists seem to be taking advantage of their privileged position. He points out that “churches” are defined very broadly in the IRS tax code and as such this has led to many greedy organizations taking the opportunity to call themselves as such. One can easily perceive his cry for justice here. He laments the severe lack of regulation—clearly hoping that the IRS would somehow hear his call and just clamp down on these rotten and corrupt organizations which take advantage of highly suggestible civilians.

Alas, it is at this point that something in Oliver’s triumphant crusade rings false. Despite whatever spiritual manipulation might be at work in these televangelist churches, the fact of the matter is, they aren’t violating anybody’s rights. They aren’t stealing from anyone. They aren’t extorting anyone at the point of a gun. They aren’t harming anyone. They are merely attempting to persuade people to voluntarily donate their money. No, they’re not saints. But they’re not criminals either.

But you know who does do these criminal acts—and quite regularly? The state and its handmaiden, the IRS!

Oliver completely misses this. He also seems to miss the idea that attempting to avoid the payment of taxes is actually not a sin—nor even a crime. In fact, taxation, of course, is not an institution of righteousness. Rather, it is the reverse: an unethical extortion of us all via an implicit threat of violence.

In light of this, in calling attention to these televangelists, Oliver sounds a bit like that tattletale in elementary school who points out to the teacher that so-and-so has brought some candy to school and isn’t willing to share with the rest of the class. He desperately wants Big Brother teacher to get involved and cut so-and-so down to size and redistribute his wealth.

Taxation may be an abuse of our rights by the state. But Oliver isn’t concerned with that. Instead, he just doesn’t want anyone to get away with NOT paying them, especially while running a “sketchy” church that he doesn’t approve of. He, of course, cannot comprehend that ideally NO ONE would be forced at the point of a gun to pay any taxes to the state–that people would actually be free from the tentacles of Leviathan.

So John Oliver calls upon the IRS hounds to sniff out these corrupt televangelists and bring them to justice. And, in fact, due to this particular segment, word is that the IRS may actually start to take a closer look at these so-called churches.

How ironic. I’m sure John Oliver and his fans think he’s mighty heroic. Sadly, he’s pretty much the opposite of a hero. In contrast to Robin Hood, he seems to be essentially stealing from the poor to give to the rich—or, in this case, trashing the peaceful and praising the violent. Because what Oliver has basically done is called out and smeared a group of organizations that receive their revenues by peacefully persuading their constituents to voluntarily donate funds. His goal is that they be essentially shut down or highly regulated.

And to whom is Oliver looking to accomplish this? Why the US government and the IRS – organizations which do not rely in any way shape or form on the voluntary persuasion or the goodwill of their citizenry in order to generate revenues. Rather, they rely on naked force and the implicit threat of violence to do the job for them. Additionally, they have no accountability as it is they who regulate themselves. This fact is, of course lost on Oliver.

It’s amazing how many Americans today are conditioned to look around and see splinters of injustice everywhere that we just have to make right. But of course, they attempt to do so by relying on the action of the state which, itself, is a log of injustice. To everyday Americans the state is the elephant in the room whose immaculate nature cannot be questioned. It is the undoubtedly divine cabal which stands for righteousness, yet is allowed to murder and steal without consequence. Incredibly, it’s all right under John Oliver’s nose and yet he does not see. Why not? After watching Oliver’s segment it is clear that, in America, it is not religion that is the opiate of the masses, but statism.

No, televangelists are not the most pristine lot. But they are a heckuva lot more righteous than the government bureaucrats at the IRS who extort and regulate the American citizenry. And, in fact, they might even be more righteous than statist cheerleaders like you, John Oliver.

Addison Quale is a Precious Metals Specialist with SchiffGold. He studied economics at Harvard University and earned a Master of Divinity at Gordon-Conwell Theological Seminary. Addison brings a well-rounded perspective to precious metals investing, with work experience at an investment consulting firm in Boston.