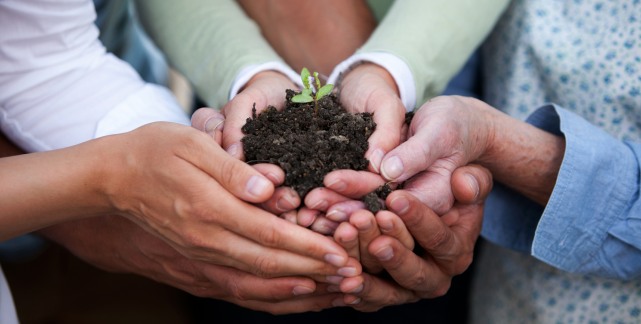 If you missed Jeff Wright’s recent guest post, go read it now. Jeff has written a must-read essay on the spiritual effects of political engagement. He engages the danger in thoughtlessly using the word “we” in political conversations and identifies the often damaging “us versus them” mentality in the world of politics. He naturally connects what it means to be Christian and libertarian.

I want to follow-up his essay with a few of my own thoughts regarding spiritual formation. In recent years I have been influenced by Christian contemplatives who have connected with God on a formative level through the spiritual disciplines (e.g. prayer, fasting, meditation). One of the recurring themes within contemplative Christianity is what Richard Rohr calls growing into non-dual thinking. That is, treating life’s complexities in more than binary ways. Asking the question, “Is this good or bad?” is only helpful in the early stages of spiritual formation. The question itself is trapped in legalism. Non-dual thinking means evaluating a solution to a problem by considering how our psyche, our soul, our hearts are affected by such a solution. One way to put it is, “What is this doing to me/us?” To be sure, the good/bad question is not useless, but it is ill-equipped to respond lastingly to deeply rooted problems. Deeper reflection is required for lifelong spiritual formation, both for individuals and for societies.

Including politics in spiritual formation means being willing to reject easy answers to complicated problems that satisfy our immediate cravings for resolution and possess the fortitude to think beyond the first stage of problem-solving. Mindful Christians will testify that the spiritual journey is not easy. Self-awareness is a practice that takes time to develop, can be emotionally taxing, and often requires an experienced advisor or guide. Psychologists are trained to discern between a person’s stated issues (symptoms) and the root causes of their pain. Medication can quickly resolve a symptom (and is often the best first action!), but it may not be the most healthy lifelong course of action.

It takes discernment to know whether or not the question, “Is this good or bad?” is suitable to evaluate the issue at hand. This is a difficult task. But this kind of discernment is precisely what Jeff Wright calls for:

We will not adequately grasp what’s at stake in given cultural institutions if we just look at what appears in the present or on the surface; we need to “read” these institutions and practices in order to discern the telos [end, goal] at which they’re aimed. It is at this point of teloi that we’ll discern the antithesis between a Christian vision of the kingdom and the visions of human flourishing that are implicit in so many current configurations of cultural institutions. Thus our cultural criticism should not be asking what ideas or beliefs are being bandied about in “culture”; rather, we should be discerning to what ends all sorts of cultural institutions are seeking to direct our love.

The telos toward which an institution – private or governmental – is headed is immensely important to the world of political ideas. Libertarians, ever-so-concerned about the means, are not known for advocating a particular end or goal for humanity. Our attitude is briefly summed up as “live and let live.” Where is the telos in that?! Deeper reflection, however, shows that libertarians are concerned about ends as much as we are concerned about the means to those ends. We simply take another route to get there. We constantly evaluate the processes by which we interact with others and gauge those interactions by how peaceful they are. Not just the “without conflict” kind of peace, but eventually the kind of peace that unites us and leads to human flourishing. Is this just semantics? I don’t think so. The libertarian telos regards how we interact with one another of utmost importance. The Christian telos is shalom with God and neighbor, which does not demand a particular vision for the future, but a way of being in the world.

This is why the key to healthy political engagement begins by considering how the means to our ends affects us spiritually. In Wright’s words, we should discern to what ends our love is being directed. This consideration is crucial to the process of spiritual formation. We cannot compartmentalize spiritual formation to certain practices or to times of day, such as our morning Bible reading, praying at mealtime, or when we participate in official liturgies at church. All of life is spiritual formation. Those things toward which our hearts are inclined indicate the state of our spirituality. We mature as Christians when we consider our affections and evaluate them in light of Jesus Christ.

When we include politics in spiritual formation, we ask new questions about contemporary issues. We evaluate our personal and corporate decisions not just by the external outcomes they might produce but also the relational dynamics they might create. This means carefully considering the effects that our decisions might have on the world around us. Does this decision reconcile those at odds with one another? Does this solution proposed proposed create hostility? Are we creating a benefit to one group at the expense of another? If so, is it permanent? These questions are difficult to answer. Some are empirical questions that lend themselves to cost-benefit analyses. Others are simply a matter of asking how this affects us spiritually? We must recognize the spiritual effects of our habits on society. We must wrestle with the question, “What is this doing to us?” How am I treating all persons equally? Are we inclining our hearts toward love for our enemies? Does our heart seek to embrace those with whom we are at odds? As Christians, are we acting as “ministers of reconciliation” (2 Corinthians 5) as the Apostle Paul identifies us?

It is common to see politics as a collective effort to work together for the common good. To some extent this is accurate, though not quite as useful as we might like to think. As a group becomes larger the essence of true community diminishes. People working together to solve large problems is a good endeavor. We were made for community. But there is a fundamental difference between people working together toward a common goal and a political process through which we treat others’ resources for the agendas of our favorite politicians. Using the word “we” can be very tricky business!

“We should tax the wealthy.” Setting aside for a moment the ineffectiveness of this idea to successfully level the playing field and the aggression that such an action entails, we ought to consider what we are saying when we advocate for taxing somebody else. How does this incline our heart toward love? Does this attitude reflect our love for people or our lust for what they have that we wish to use? If we accept this as a legitimate role for government, do we diminish our ability to see the rich as individuals made in God’s image? Christian libertarians suggest that, in fact, taxation undermines human dignity and reflects a lack of respect for those taxed and even for those receiving the state benefit.

“We should secure the borders.” However we define “secure,” this statement is fraught with disheartening attitudes toward other human beings. What is it about those living on the other side of a geopolitical border that makes them a threat? Perhaps those most adamant should stand at the border and face a hungry child and say to her, “If I say yes to you, I will have to say yes to potential terrorists.” Is that too subjective an idea on which to base policy? Perhaps. However, if we are committed to spiritual formation, a certain element of subjectivity is involved in all decisions, try as we might to be as objective as possible.

The bottom line for spiritual formation in the world of politics is this: We cannot rely on our fear, anger, impatience, and anxiety to fuel political actions we are so eager to pursue. These are not the fruits of the Spirit. They undermine good outcomes from the start because they short-circuits healthy development. Fueled by the eagerness for immediate results, are we taking action at the risk and expense of unpredictable side effects that damage ourselves and others? Immediate action is sometimes warranted, but I would suggest they should only serve to buy us time to implement better solutions for the long term. Getting immediate results is not a litmus test for effectiveness or superiority. A child can tape the pieces of a broken cup together, but more work is needed to heal what was broken. Healing requires the appropriate tools in the right environment and a necessary amount of time.

Wright says, “How we engage politically shapes the inclinations of our hearts. It makes us a certain kind of person.” Despite the reputation of libertarians as ravenously greedy puppy-eaters who take no consideration for the plight of others, libertarians often start with the best premise: individuals ought to be free. If there is a problem, we will not accept a solution if people become unfree. It trumps the “us versus them” framework that so often results in marginalization. It is all-inclusive. It dignifies the marginalized not because of their plight but because they are human.

So what kind of libertarian are you? Is being free about protecting your own status, your own right to not be tread upon? It should be that, of course, but for Christians it must be more. Considering politics as spiritual formation should set our hearts to thinking about what it is we are doing to ourselves when we propose a way of being in the world. When we promote freedom for all, we promote a way of being human that shapes us spiritually into beings that honor, respect, and love others.

Everything is spiritual, including politics.

PrevPrevWhy Don’t Conservatives Follow Their Own Constitution?
NextRegistration now open for the Christians for Liberty 2015 Conference!Next