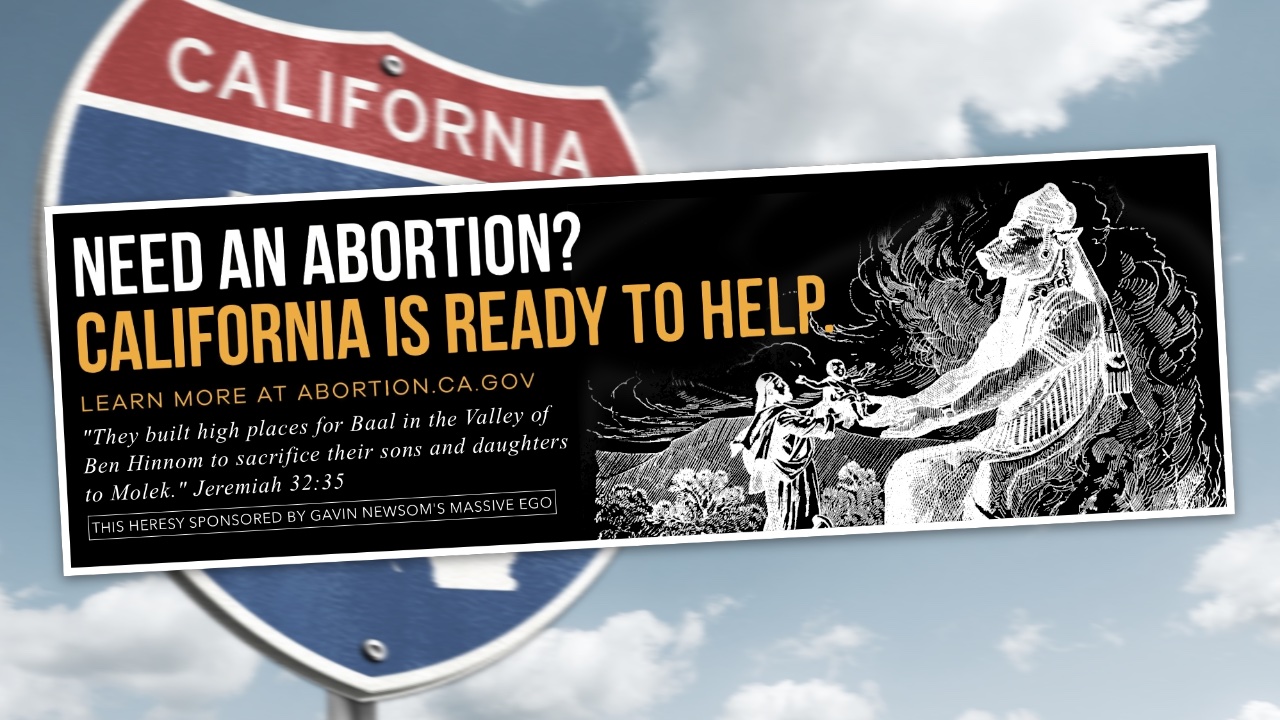 If you are looking for signals of the degradation of civil society, you cannot do much better than observe California politicians leading the way.

You might say to yourself, “Big deal, Cali is ridiculous anyway, this is what they’ll do inside their state.” Except, dear reader, that Newsom did not put these billboards in California at all, but rather in seven other states: Texas, Indiana, Mississippi, Ohio, South Carolina, South Dakota, and Oklahoma.

Nevermind letting other state governments’ business be their business, eliminating babies is too important! It’s one thing to comment on other states’ policies, for sure, but spending substantial resources to execute a plan like this is on another level.

NEW: Just launched billboards in 7 of the most restrictive anti-abortion states that explain how women can access care–no matter where they live.
To any woman seeking an abortion in these anti-freedom states: CA will defend your right to make decisions about your own health.

Now you may wonder, why on earth would Newsom do something like this? He is literally using campaign money to fund these billboards? Think about it, and you can easily conceive of two reasons. (Okay, pun was not intended there but I’m leaving it.)

First, Newsom believes this is what his California voters want to see. If the billboards stay up, he can put on the show for his CA voters that he’s doing things they want done (at least, in his own imagination). If the billboards are removed, either through normal means or because some angry person decides to vandalize them, then he can leverage that toward declaring himself as a victim of speech-squelching or something to that effect.

Second, Newsom is angling for his presidential aspirations. He obviously wants to run and despite repeated assertions to the contrary it is entirely possible that he wants the 2024 nod in the case that Biden doesn’t run for reelection. For instance, he is on record saying that democrats have a messaging problem by essentially not being progressive enough.

But enough of the politics. Frankly, this whole story gets even worse. The billboards going up in Oklahoma and Mississippi are particularly heinous for their appeal to the second greatest commandment a la Mark 12 to justify this stance on abortion. Observe:

Newsom apparently forgot that among “these” great commandments include in Mark 12:30 to “Love the Lord your God with all your heart and with all your soul and with all your strength unless you need to abort a baby because that’s just fine with the Lord your God.” No, of course it doesn’t say that, and the Lord God understands that I’m making a rhetorical point here. Newsom has no interest in promoting the just and true word of Almighty God, but rather building a high place where people can practice the murderous agenda of Molech (see Leviticus 20 and throughout the Old Testament).

Referring to the great commandments to love God and neighbor as a pretense for supporting pro-abortion policy is profoundly stupid and evil.

What logic supports such ideas? Even if we steel-man that argument, and suggest that for cases of rape or incest you could construct an argument to justify the taking of that life, that certainly does not justify extension into the ~99% of non-rape/incest abortion cases. Of course, imagine if you asked the pro-abortion advocate if we stipulated that exception in the law broadly, then would they accept that policy as morally right. To ask is to answer.

I frequently disagree with John MacArthur on various things, but I am quite happy to commend his very public denouncing of Newsom for this stunt. I can’t say it much better than this:

“The Word of God pronounces judgment on those who call evil good and good evil (Isaiah 5:20), and yet many of your policies reflect this unholy, upside-down view of honor and morality…

You revealed to the entire nation how thoroughly rebellious against God you are when you sponsored billboards across America promoting the slaughter of children, whom He creates in the womb…

You further compounded the wickedness of that murderous campaign with a reprehensible act of gross blasphemy, quoting the very words of Jesus from Mark 12:31 as if you could somehow twist His meaning and arrogate His name in favor of butchering unborn infants.”
-John MacArthur

To MacArthur’s credit, he doesn’t even stop his letter with calling out the policies and perversion of scripture, but he also calls the governor to repentance. Well done, sir.

These politicians are fools and deserved to be called such, but even fools ought to be presented with the Gospel. Let’s remember that as we press on to oppose evil among us and promote individual liberty.

Did you like Abortion is Not Loving Your Neighbor, Governor Newsom?
You may also like These Posts: