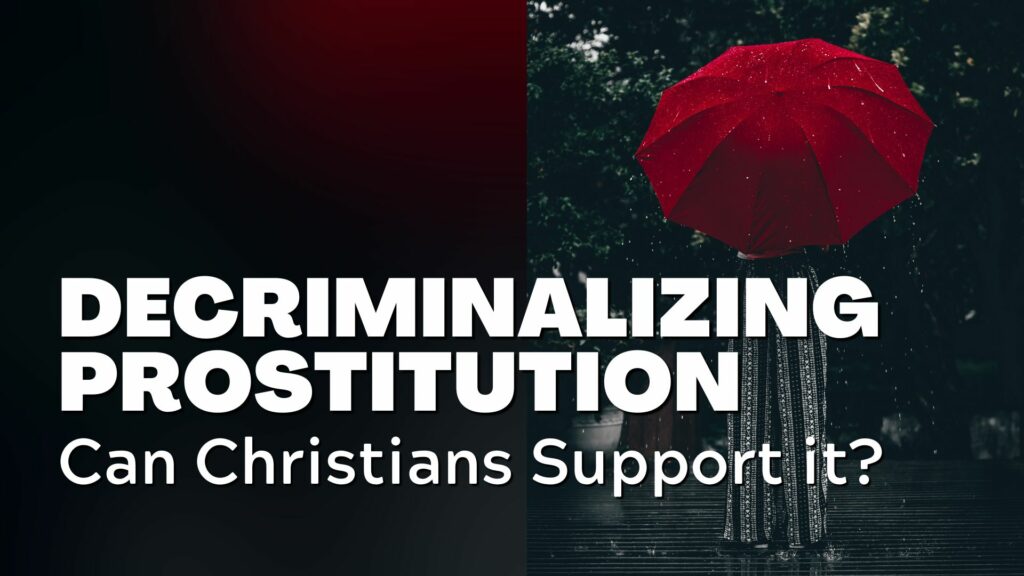 In this episode, Kerry Baldwin guest hosts and interviews Melissa Broudo. Broudo is the co-founder and co-director of the Sharmus Outlaw Advocacy and Rights (SOAR) Institute. She has been part of the sex-worker-rights and harm-reduction movements since the late 1990s, co-founding SOAR to further policy, advocacy, and capacity-building efforts that support the rights of sex workers and survivors of human trafficking.

Our knee-jerk response may be an automatic, “no, of course not!”. Yet, the many (not all) reasons favoring decriminalizing prostitution are towards ends that Christians do desire. Namely, mitigating human trafficking, focusing and improving civil governance on actual acts of aggression, and making it easy to leave the profession when someone wants to. Broudo highlights some key distinctions of terms including the differences between sex work, prostitution, and trafficking, as well as the important distinction between decriminalization and legalization.

Many Christian organizations seeking to rescue victims of sex trafficking are enticed by something called the Nordic Model – where only the demand side of the sex trade criminalized. Meaning, only the purchase of sex legally prohibited, not the sale of it. Broudo touches on a number of problems stemming from actions taken by law enforcement in the name of “rescue.” Other problems include government violations of personal data, encryption, freedom of Internet platforms, and the like that we discuss.

Baldwin and Broudo also touch on concepts such as bodily autonomy and agency and even how our disagreements on abortion might be set aside on our more common ground related to the concerns raised about women and sex more generally. Portions of our interview were cut out for the sake of time, but included information about the successes of decriminalization in New Zealand and (formerly) in Rhode Island.

Is there a connection between stigma of prostitution and purity culture? Baldwin and Broudo discuss the manner in which the state (both judicial and law enforcement) handle rape cases for women (prostitutes or not) the feminist mentality that all women are essentially victims, and finally the connection to some beliefs held by Evangelical purity culture types.

Rape is the one violent crime in the United States where a judge will consider whether a woman “invited” the violence against her. Law enforcement has historically ignored crimes against prostitutes using the acronym NHI to indicate “no humans involved.” Radical feminists, who oppose decriminalization or legalization, view all sex work as exploitative and disregard the possibility a woman would consciously and voluntarily do this kind of work as a profession.

Christian teaching emphasizes that we not confuse or complicate our speech – that we let our ‘yes’ simply mean ‘yes’, and our ‘no’ mean ‘no’. (Matt 5:37) But are young girls and women taught how to say ‘no’ and is that ‘no’ honored by our culture?

We close with a brief discussion on economics and why the Nordic model fails on that front. If you’ve had questions about issue and have wanted an honest response from a Christian perspective, you’ll find this interview both informative and challenging. We also address some tough questions raised by thoughtful Christians against decriminalization.

Disclaimer: As you can probably tell from the title, the following episode contains themes of a sexual nature. The Libertarian Christian Institute advocates and endorses a Christian sexual ethic, namely that sexual intimacy is a gift from God, to be enjoyed only within the bounds of heterosexual marriage. Our guest does not share this same view. However, this is an opportunity to discuss topics relevant to Christian libertarianism, that are also topics weighing heavy on minds of many Christians, to include sex trafficking, sexual abuse, and how our society and government treats women overall. As a consequence, this discussion may not suitable for everyone.