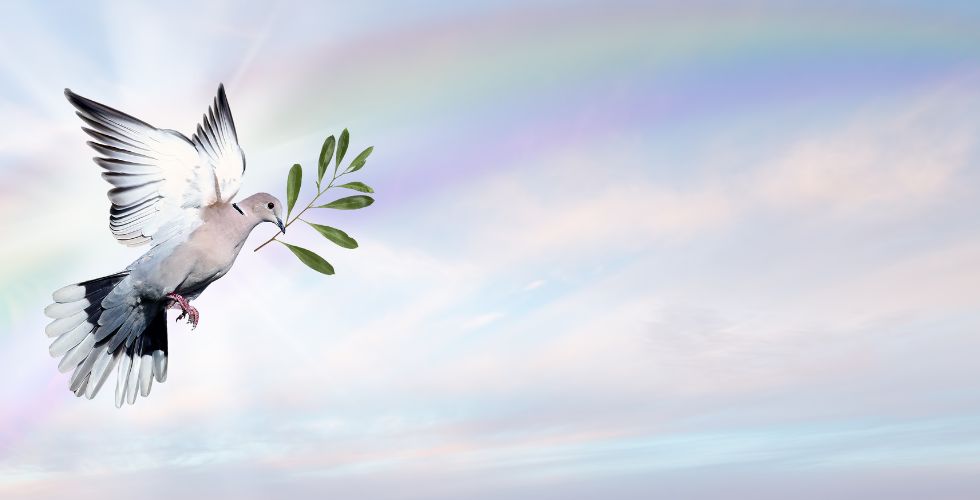 With over 14,000 dead and many thousands more injured or displaced, the Russian invasion of Ukraine is a present-day horror. Urban bombardment has devastated population centers, flattened hospitals, and driven people from their homes. Unlike conflicts in previous eras, the terrifying details of Russo-Ukrainian War can be observed as they transpire, through the lenses of millions of privately owned smartphone cameras broadcasting to viewers around the world. Many such recordings have shown civilian preparations to defend against the invaders, including the manufacture of Molotov cocktails and the arming of grandmothers with Kalashnikov rifles. While we support the Ukrainian people in defending themselves against this violence, across the world Christians must love peace, even now.

Contents show
1 Christians Must Love Peace, Even Now
2 Christians don’t need to feel conflicted about this
3 War: Christians, don’t fall into the trap!

This frightful threat against Ukrainian civilians has inspired popular support from all over the world. According to Candid, nearly $400 million in private charitable donations for Ukraine were raised during the first two weeks of the conflict. The New York Times and others have documented the efforts of many military veterans now traveling to the region to offer their assistance.

National governments are also taking action. The United States government alone has provided more than a billion dollars in security assistance to Ukraine since the start of the conflict. This assistance has largely taken the form of weapons, ammunition, and armor, as well as military training and intelligence sharing.

These states have also imposed economic sanctions on Russia in response to the war. Russian exports have been barred in whole or in part by a number of former international trade partners. International transfers involving the estimated $140 billion in Russian gold stores have been frozen by such sanctions, though the domestic market for gold in Russia is booming as the Russian Ruble has crashed. Even the private assets of wealthy Russians abroad have been frozen, notably including the Chelsea Football Club owned by Roman Abramovich since 2003.

Increasingly, there have been calls for the United States and other members of the North Atlantic Treaty Organization (NATO) to directly engage Russian forces in defense of Ukraine. This is not a hot war quite yet, but it’s getting close.

Christians don’t need to feel conflicted about this

We can recognize the right to self-defense and decry the aggression of Russia, while also recognizing the faults of Ukraine and the complicity of NATO in fomenting the situation over the years. Ukraine, for instance, has an extremely corrupt government, rated as the second worst in Europe by Transparency International. (Of course, Russia is ranked even worse!) This can even simply be seen in Zelensky’s crackdown on free speech of private media outlets.

While Russia clearly is the aggressor here, we cannot ignore how NATO’s posture has stoked the embers of Russia’s ire for years. As the Cato Institute’s Ted Carpenter has observed: “Vladimir Putin bears primary responsibility for this latest development, but Nato’s arrogant, tone‐​deaf policy toward Russia over the past quarter‐​century deserves a large share as well.” There is no doubt that had diplomatic relations been better executed, this conflict would have been averted.

We Christians ought to be able to see this more clearly than the worldly non-believers among us precisely because we see through the lens of allegiance to Christ. The intrinsic evils of statism and the the institutional momentum clashes of these massive states inevitably will lead to the horrors of war.

As such, Christians should never call for the expansion of war. There is no redeeming quality to it. Participation will inevitably lead to certain sin, and we are called never to initiate sin so that good may result. War is the health of the state, so why would we ever promote it when it leads to so much evil and supports the continuing evils of statism?

Remember that no individuals, not even small groups, can initiate wars. At worst, regional conflicts occur when distributed peoples, what amounts to gangs of thugs, decide they want to come to blows. Real war occurs when rival governments clash over what they both want and will kill to get.

But Christians, both in America and across the world, often are deceived by leaders philosophizing how the killing in war is good because it is organized by their leaders and not the small groups. It is now “just” because “we” did it “by the rules.” But “we” are not the government, and such language is ideological camouflage for those who desire power and domination over others.

War is simply mass murder at even larger scale. Many of our Christian forebears, even in the United States, understood this. From thinkers such as Alexander Campbell and David Lipscomb in the 19th century Churches of Christ, to famed preacher Charles Spurgeon, to the early church fathers, consistent Christians have always realized that our faith calls us to eschew such violence. Self-defense may be permitted, but we do not participate in the ratcheting up of aggression at the whims of corrupt world leaders. By refusing such calls to kill, we fulfill the call of Christ to be a blessed “peacemaker.”

PrevPrevWhy More Christians Need to be Libertarian and How to Convince Them
NextEp 279: Religion is Not the Basis for Opposing Abortion, with Jose GalisonNext