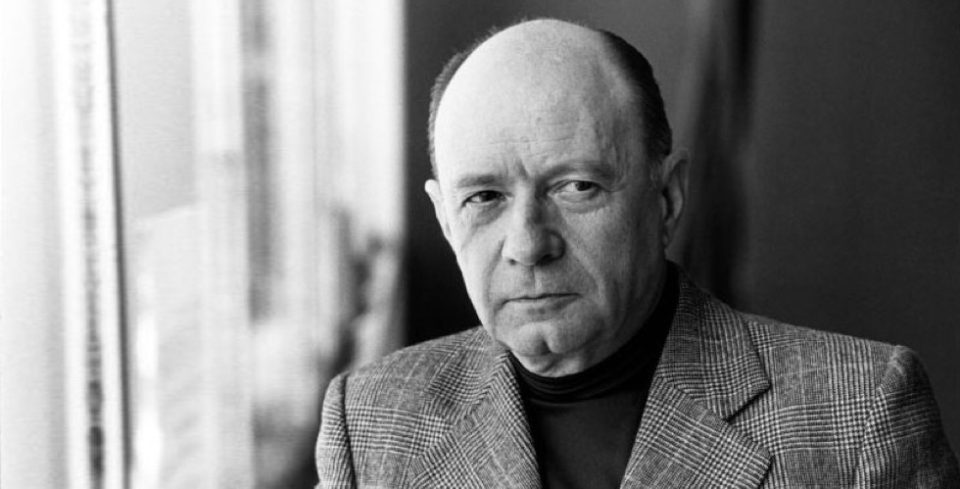 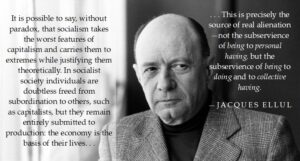 The French sociologist Jacques Ellul (1912-1994) was not just ahead of his time. He was a remarkably independent and eccentric thinker. I like to think of him as part Owen Barfield, part Michel Foucault, and part Alexander Solzhenitsyn.

Many free-market theorists, neoclassical economists, and libertarian political philosophers frequently remark that capitalism is not perfect, but it’s the best economic arrangement out of alternatives. Ellul might agree—but he wouldn’t shy away from digging deep into just why capitalism is imperfect. Imperfection means there are problems, and so they should be discussed. He remarks, for example, in his book Money and Power:

We must recognize the truth in Karl Marx’s observation that money, in the capitalist system, leads to alienation. One of the results of capitalism that we see developing throughout the nineteenth century is the subservience of being to having. This result makes allegiance to capitalism virtually impossible for a Christian. For it is not a by-product, something that might not have happened, a result that could be eliminated by a better organization of capitalism. To the contrary, it is the inevitable consequence of capitalism, for there is no other possibility when making money becomes the purpose of life. (20)

What does he mean by “being” to “having, and “money becomes the purpose of life?” and how did that originate?

Capitalism’s emergence from Medieval feudalism had many causes such as expanded trade, technological inventions, the enclosure movement, and also “the put-out system’—a transformation of the manorial system at the lowest levels of feudalism. This last phenomenon was the seeds of one of the most controversial features of modern capitalism—the relationship between employer and employee, and the nature of “wage labor.”

In the earliest period of the putting-out system, the merchant-capitalist would furnish an independent craftsman with raw materials and pay him a fee to work the materials into finished products. In this way the capitalist owned the product throughout all stages of production, although the work was done in independent workshops. In the later period of the putting-out system, the merchant-capitalist owned the tools and machinery and often the building in which the production took place. The merchant-capitalist hired workers to use these tools, furnished them with the raw materials, and took the finished products.

The worker no longer sold a finished product to the merchant. Rather, the worker sold only his or her labor power…Capitalist control was, then, extended into the process of production. At the same time, a labor force was created that owned little or no capital and had nothing to sell but its labor power. These two features mark the appearance of the economic system of capitalism. (Hunt and Lautzenheiser, History of Economic Thought, 14)

With little to no capital themselves, the working class naturally became fixated on wages. (This was amplified in Industrialism). And wages was therefore the key to hopefully obtaining capital hopefully someday in the future. The “rat race” began, or as Ellul puts it, the move from being to “having.” The capitalist-merchant class also realized that to buy all the new goods from other countries and improve their own well-being, they needed cash—thus focusing on cheap labor and high production in general, and not just the maintenance of their particular lands.

But that was just the beginning. Massive population growth and the creation of trade-cities created a new relationship of demand between urban and rural populations. Peasants began exchanging surpluses on local grain markets in exchange for money. The surplus from these markets could be used to pay off the lord of the manor. “The cumulative effect was a very gradual breaking down of the traditional ties of the manor, substituting the market and the search for profits as the organizing principle of production. By the middle of the 14th century, money rents exceeded the value of labor services in many parts of Europe” (History, 15).

This effect also worked its “way up the ladder”:

The lords who needed cash to exchange for manufactured goods and luxuries began to rent their own lands to peasant farmers rather than having them farmed directly with labor service obligations. This process led increasingly to a situation in which the lord of the manor was simply a landlord in the modern sense of that term. In fact, he very often became an absentee landlord… (History, 16)

The effects of this revolution were further amplified when prices rose 200-400% in the 1500s (due to influx of gold and silver). As a result, “both the landlord class (or feudal nobility) and the working class suffered, because their incomes rose less rapidly than their expenses. The capitalist class was the great beneficiary…It received larger and larger profits as it paid lower real wages and bought materials that appreciated greatly as it held the materials as inventories” (History, 18).

One can see, then, how the emergence of capitalism is tied to a greater concern for money in particular (not just wealth) as a major goal of economic activity. Without regular and substantial corrections, this structural bent will terminate in a series of morally shallow and problematic results.

That’s what Ellul is concerned about in this quote. And he cleverly notes that this central problem doesn’t actually go away by the traditional socialist economic models, but instead accentuates them. Entitlements to property don’t go away, they just become centralized. Concerns for economic flourishment don’t diminish, they only deepen. And since economic ends cannot be achieved without economic means, the production process—and of course, money itself—becomes as central as ever.

Did you like Elucidating Ellul #1: The Problems of Capitalism and the Bigger Problems of Socialism?
You may also like These Posts: