Is the Bible “pro-government?” 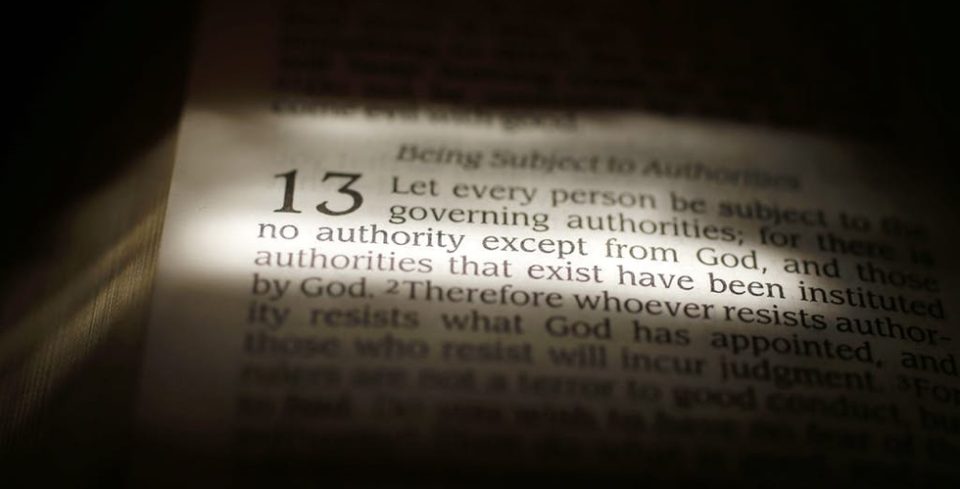 Is the Bible “pro-government?”

Yes, we find governments operating throughout the Bible. We even see various governments ruling over God’s chosen people. In fact, we don’t find any biblical condemnation of the State.

But this doesn’t establish the Bible as pro-government. After all, we find slavery throughout the Bible with no direct evidence that God opposes the institution. Slavery exists and operates without question through the biblical narrative. Does that mean the bible is “pro-slavery?” People made that argument not so long ago.

Christians reject slavery today because we recognize the evil inherent in a system that supports “owning” another human being. We recognize that it undermines the dignity of the individual. Most importantly, we recognize slavery as antithetical to the Second Great Commandment – “Love your neighbor as yourself.”

Slavery is a sin-construct. It was tolerated in society up until the point we understood God’s revelation enough to reject that sin. In fact, it was Christians who led the fight for abolition.

We find other examples of progressive revelation and evolving moral/ethical norms in scripture. For example, polygamy was tolerated in early Hebrew society. Is the Bible “pro-polygamy?” War was also tolerated and even endorsed in the Old Testament. Is the Bible “pro-war?”

Government is also a sin-construct. After all, it rests on a foundation of coercion, force and violence. Christ implores his followers to interact with one another based on mercy and grace. There is no way to shoehorn Christ’s teaching into supporting a society that literally operates on the basis of lethal force. When we understand the nature of government and illuminate it through Christ’s teachings on how we should relate to one another in society, it becomes clear that the Bible is not “pro-government.”

To be clear, when I say the Bible is not “pro-government,” I don’t mean God opposes governance in the abstract. When I say government, I’m referring to the institution – specifically the institutional body that runs the State.

I use economist Murray Rothbard’s definition of the State.

Government is the institution through which the State operates and maintains its existence.

I sometimes refer to myself as a Christian anarchist. A lot of people insist such a thing can’t exist. I actually prefer the term “voluntaryist” because the word anarchist carries with it all kinds of implications depending on who uses or hears the word. But it literally means “without ruler,” and thus implies the idea of self-rule.

But self-ownership does preclude using aggressive force against others.

As I mentioned earlier, the State operating through the institution of government comes into being and maintains itself through violence, coercion and force. The ethical and moral foundation of the state (and the government mechanism that directs it) is antithetical to the teachings of Christ.

As Christians who claim allegiance to a different Kingdom founded on an entirely different set of ethical and moral principles, I believe we should reject the kingdoms of this world and their governments. Yes, they exist. Yes, we have to live within them and to some degree “submit” to them. And yes, God uses governments for His purposes.

Again, the State is a sin-construct, just like war. I don’t run around and say, “Well, war has always been with us and war is in the Bible. I guess I’ll cheerlead bombing people I don’t know who’ve never aggressed against me because some politicians say I should hate them or they pose some abstract threat.” No, I am going to oppose war in all of its forms as a follower of the Prince of Peace.

In the same way, I am going to oppose the State and its violence, coercion and force.

I look to the early church and its interaction with Rome for guidance. The early church didn’t rebel; it didn’t join those looking to violently overthrow the Roman government. But neither did it support Rome. In fact, early Christians refused to participate in aspects of Roman civil society that conflicted with their faith. Many willingly died to take that stand. I don’t think this in any way constitutes “not thinking Christianly.”

One of the overriding biblical themes is that God’s people should “come out” of Babylon. Babylon was not only a real empire, but it is also representative of every worldly empire that has or will exist – i.e. Rome, Britain, the United States.

To say the Bible is “pro-government” in the sense that I’m using the word is to say the bible is “pro-violence” and “pro-coercion.” Do you really want to try to make that case?