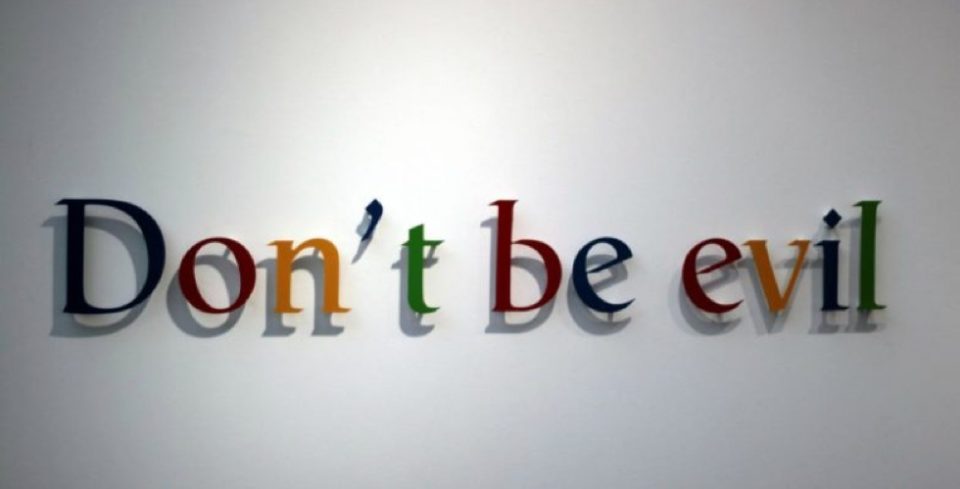 It seems in life, that every blessing eventually turns into a curse. The house you’ve always wanted now requires $20,000 in maintenance. The child you’ve always wanted turns into massive headache 15 years later. God is now hearing you pray for a different job—even though the current one was an answer to prayer just two years ago. (These are cynical observations, I know—especially given the Christian reality and mission of turning curses into blessings—bloody crosses into icons of peace. But bear with me…)

Nowhere is this strange phenomenon of life more true than in business world. The technology and production process that catapulted your firm ahead of everyone else, is now the cause for getting behind. And the real, innovative entrepreneurs of the past become today’s crony-capitalists, oligarchs, and tyrants. Despite all the success, cashflow and zillion dollar salaries, there ain’t nothin’ as sweet as that “gubberment money.”

I’ve been so blessed by Amazon and Google for their goods and services over the years. But it seems the reasons for their moral demise increase every day. The line between “public” and “private” is no longer clear; there are too many legal (and illegal) compromises. Popular, media narratives also chime in to confuse most of this story. (I try to explain to friends that, today in 2018, Bezos and the Google guys are 10x the crony-capitalists that Elon Musk is, but they still don’t believe it.)

Lots of protests against Google have happened since the revelations of Edward Snowden several years ago. Boycotts of Android, Gmail, and other services became a thing. Especially in a capitalist market, we really should ask ourselves: why choose to encourage concentrations of power when we don’t have to? But the other day I was struck by a recent headline, in what seems to indicate a new level in the conversation: “Google employees protest over the company’s work for Pentagon’s drone program.” I thought, Wait, what? Please don’t tell me Google is part of the warfare state. Of course, that was a naïve starting point to begin with. In any case, I read on about “Project Maven.”

The CEO of Google Cloud assured employees in a somewhat contradictory statement, “that the technology will not ‘operate or fly drones’ and ‘will not be used to launch weapons.’ While this eliminates a narrow set of direct applications, the technology is being built for the military, and once it’s delivered it could easily be used to assist in these tasks.” The petition of 3100 signatures stated clearly:

“We believe that Google should not be in the business of war. Therefore we ask that Project Maven be canceled and that Google draft, publicize and enforce a clear policy stating that neither Google nor its contractors will ever build warfare technology.”

On first look, I thought this was great: those sensitive to microaggressions are actually speaking out against macroaggressions. But then I wondered, what is the basis for one’s concern on this topic? On the one hand, it doesn’t seem many people (including Christians, even libertarian) are protesting against Colt and other arms manufacturers for doing business with the warfare state (why else would they be making most of their guns?) Then again, maybe they should. (It’s hard to kill lots of people without killing machines to begin with.)

There would seem to be substantial moral compromises in the life of Christians who spend their years building killing machines. I just can’t see Priscilla, Aquila, and Paul building swords instead of tents while bringing the good news to everyone in the Mediterranean (can you?). I think there are also moral compromises that also occur when building the goods that comprise the killing machines—whether the software, hardware, or otherwise—especially when there is knowledge that this is there most probable end.

What if the “consumer good” (the ultimate “product” of the production process) is uncertain, as it may seem to be in this program (or others) by Google? Well, from a business standpoint, one should be true to company policy and goals (as the petition notes). If it’s not, the company is outside its own boundaries and employees have every right to object. As for the Christian, however, one might want to at least err on the side of caution. That is, I’d rather build stuff that probably won’t (instead of probably will) end up severing a child’s legs. I guess that’s a choice they would need to “make up in their own mind” (to use a Pauline phrase).

Indeed, a parallel could easily be made to the animals sacrificed to pagan gods in Corinth: should Christians eat the leftover meat from the temple-restaurant that was later being sold on the open market? (Eating at the temple itself was out of the question.) According to Paul, if it doesn’t bother the person, sure. If it does, then don’t. And if someone else might stumble because of it (the precautionary principle), then no.

But then the discussion in 1 Corinthians 8 and following goes further: what if you’re at a friend’s house and they serve meat, and you don’t know where it came from? Paul’s answer: it’s fine, unless they tell you where it came from. If they don’t, and if you don’t care, then go ahead. In these cases, the condition is awareness, because knowledge is a source of the conscience’s conviction and orientation.

So, perhaps then, if Christian employees of Google have no idea that their software is going to be used to blow people up, there may be no problem. It would be best, of course, if they figured out in advance (if they could) that this was its purpose. But if they can’t, it’s up to their own conscience. But if it becomes clear that a project is probably going to be used in that direction, it’s best to bail. Yes, it does seem these Google employees are acting like Christians in this respect.

But what about those who support Google? Use their products and services every day? The answer is probably the same: each person decides in their own mind. (After all, our tax dollars are already paying the war machine, but that doesn’t necessitate a tax revolt; we decide on our conscience if we should stay in this country and not move to another. For more on that topic, see here.) However, in the case with Google, there is a whole lot more than the potential of supporting drone programs. There is a massive surveillance and communications apparatus that is so centralized—and so integrated with the state—it really is quite concerning. (The only reason I support Musk going to Mars is that it will provide a genuine place of escape!) So a boycott of Google will likely continue—and I would not be opposed to that.

When do I close my actual Gmail account? I don’t know. But I will say I’m glad at the growing number of alternatives to the services I use. In any case, we shouldn’t be surprised to find ourselves in a number of morally-compromising situations in the near future when it comes to mass crony-capitalism and technological companies. The state isn’t going to break up any monopolies if it benefits from them. The responsibility of an informed consumer, then, is to empower those deserving power, and discipline those companies that don’t deserve our money.

Did you like Google Meets Corinth: Comparing Software That Kills to Meat Sacrificed to Idols?
You may also like These Posts: