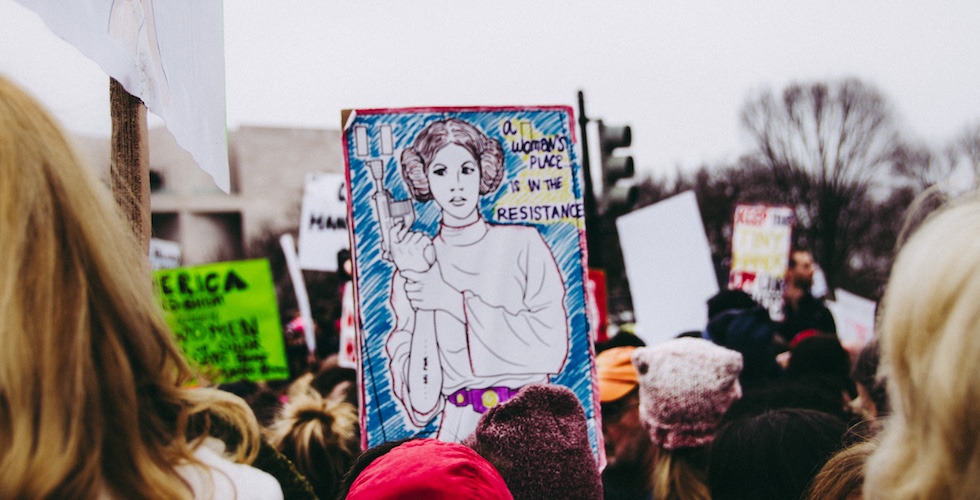 One ill-fated presidential candidate (remember her?) campaigned with rhetoric she used 20 years prior in Beijing at the 4th World Conference for Women where she declared, “If there is one message that echoes forth from this conference, let it be that human rights are women’s rights and women’s rights are human rights, once and for all.” In a New York times interview in 2015, Hillary Clinton remarked about the progress in women’s rights made in the two decades since her speech, that “it’s a glass-half-filled kind of scenario.” In other words, that even in America today, women don’t enjoy half of the rights Clinton believes they are entitled to.

What exactly is supposed to be entailed in women’s rights, and why are women being presented with the idea that their rights are a special concern apart from men’s rights?

Wikipedia lists the issues commonly associated with women’s rights movements around the world. Let’s break these down, and evaluate them according to a libertarian view of rights.

The right to Life includes:

The right to self-ownership; the right to control one’s reproductive functions, freedom from genital mutilation, and forced abortion and forced sterilization; freedom from child marriage, forced pregnancy, and abuse during childbirth.

The right to Liberty includes:

The right to educate oneself generally, and particularly about personal healthcare, STDs, and contraception; the right to seek/contract/leave employment, participation in the marketplace, and freedom of movement.

The right to Property includes:

Based on this, let’s reconsider the Wikipedia list and categorize the supposed women’s rights in terms of whether they are legitimate human rights, non-rights, or (our questionable category of) “women-only” rights.

Legitimate rights (for both men and women):

Non-Rights (For men or women)

The list of legitimate rights are rights that all individuals are entitled to regardless of age, gender, or any other demographic marker. This means that they aren’t exclusive to women but apply to men as well. And here we can agree that when violations of these things occur, justice needs to be served.

Immediately, it needs to be made clear that legal “rights” are not necessarily rights. Voting is a legal “right” made possible by legislation. But writing legislation doesn’t create actual rights where there were none. Frederic Bastiat reminds us that our rights precede the creation of laws. So if we cannot derive rights from life, liberty, and property, then these things are actually rights-violations.

Voting is not a right because it involves choosing rulers for others. Employment (and pay and benefits) is not a right because business owners can’t legitimately be forced to hire anyone. Discrimination is a natural consequence of choice, and so part of our right to liberty, and no one can be legitimately required to pay for services (like education and healthcare) for other people.  None of these are genuine rights, and they wouldn’t be exclusive to women even if they were.

The remaining category exclusive to women’s rights is concerning the legitimacy of “reproductive rights.”

“Reproductive rights” are defined as:

Reproductive rights may also be understood to include education about contraception and sexually transmitted infections, and are often defined to include freedom from female genital mutilation (FGM), and forced abortion and forced sterilization.

Our previous categorizing helps us recognize which of these are legitimate rights and which are not rights at all.

While I won’t do so here, I have already argued that the only coherent position (libertarian and Christian) is that every fetus is a rights-bearing human being. Abortion necessarily violates the rights of another human being, and so there can be no basic human right to abortion.

In the fight for “women’s rights,” women have legitimately demanded moral consideration. But in doing so, feminists and abortion advocates are refusing moral consideration to unwanted fetuses and to their fathers. In the final analysis, the only way to argue for abortion as a right, is to embrace the very same dehumanizing ideology that has been used against women themselves.

While we can rightly conclude that women’s rights do legitimately involve roughly half of those concerns listed by Wikipedia, it’s not because women have special rights, different from those of men. Instead, women hold all their rights in common with men (this is real equality). The difficulty in using the term “women’s rights” is its being identified with those issues which are not rights at all, especially abortion.