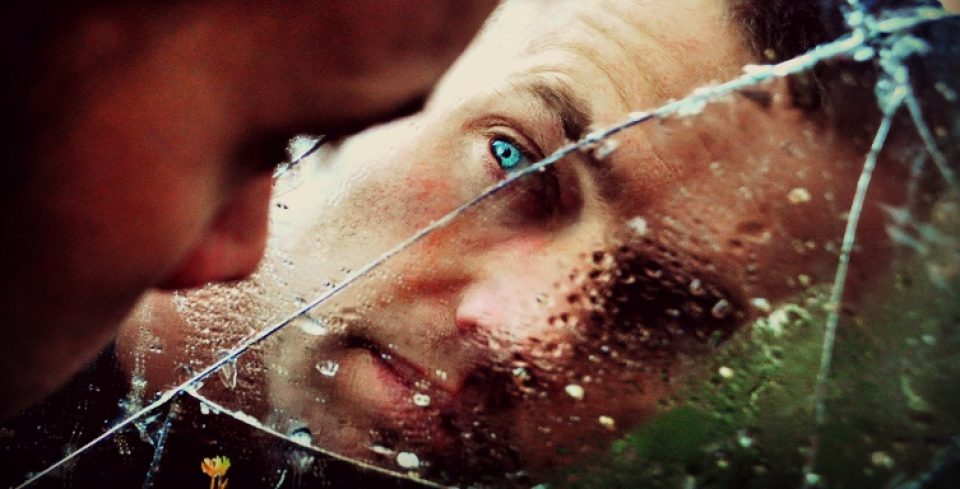 Go to any western liberal arts university class and you’ll hear the choir sing in refrain:

Wait, why are secular academics in the 21st century echoing the Gospel of John?

It’s complicated. According to John’s letter, a long time ago, God came to Earth as a man. But he didn’t show up as all socially-constructed religions had yet imagined; instead of ruling with domination, violence, and vengeance, he offered unconditional mercy and forgiveness. Instead of gold thrones and decrees, he was born in a food trough and offered questions.

For ‘Word,’ John uses the Greek term Logos, which means the cosmic or divine ordering principle of reality. He does this intentionally to bring into sharp relief the beginning of the end of darkness. All human cultures (with some shades of variance) had affirmed that the Logos—the ordering principle of reality—was dominance built on sacrificial violence against an Other. Some person or group (hopefully not you) must be sacrificed so as to maintain societal order. But why?

Human beings are master imitators. It’s how we devised technology and culture, both of which were driven by our greatest tool: language. Our greatest strength—the ability to see each other so well that we learn and develop beyond the capacity of any animal—is also our greatest weakness. When we copy each others’ desires for the same perceived scarce object or social position, we descend into brutal violence. In order to prevent this runaway deadly game of copycat, we stumbled upon a means of relieving pent-up tension: kill or banish a person (or group) whose external differences made them stand out in a growing sea of undifferentiated rivals.

It’s almost like human competition turns us into an amorphous blob of sameness that takes on a collective life of its own which, if left unchecked, will devour itself. So the blob must feed on difference: the wart-nosed woman, the dwarf, the rich old chieftain who has worn out his privileged welcome, the albino, the disabled, the disturbed, the beggar, the loud-mouth, the social engineer whose machinations malfunction—anyone who in a flash crisis stands out as a bearer of difference, whose misfit presence must be extinguished in order to allow everyone else to turn their finger-pointing from one another onto a single source of trouble.

Looney Tunes profoundly demonstrates this point. When the characters fight, they increasingly imitate each others’ tricks and slights until they become one amorphous moving dust cloud. Inside that cloud, the rivals perceive themselves as more different than ever, but to the outside observer—including Bugs Bunny, who often cleverly slips out of the cloud unnoticed to wink at us—it looks like one maddening unified ball of futility. Ancient cultures found a way to end this fight cloud by cascadingly noticing one individual who stands out and uniting against him or her.

Throughout world history, myths and taboos developed as cover stories to explain why we needed to maintain boundaries and differences protected with the controlled repetition of our original spontaneous lynchings. The pantheon of gods that we created—our social ordering principle narratives—demanded careful human sacrifice so as to provide a dose of catharsis to communities on the verge of social, undifferentiated chaos. Social pecking orders, rules of dress, theft prevention: all of these were guarded by human sacrifice of a common ‘Other.’

Returning to the Gospel of John, we have a breakthrough insight. John’s use of the term Logos indicates a fresh new creation story that challenges the darkness of sacrificial religions. This story immediately winks at the audience regarding to the social construction of reality. The Gospel indicates that God—Logos, Being, Existence itself—is both person and family, a trinity of self-giving reciprocal love. God makes creation in the likeness of this Logos; we humans are made to imitate this self-giving love to one another. This love is then demonstrated by God coming to Earth as a human, living a life of action that reflects this new social ordering principle, and stepping into our sacrificial meat grinder and breaking it from within with his innocence and perfect refusal of revenge. Father, forgive them. They don’t know what they’re doing.

After two thousand years with this story of the Word, along with its art, songs, and communities of remembrance, we still don’t know what we’re doing (but we’re working on it). The West has been culturally infected by the Cross for so long that it has transformed our common word for ‘sacrifice.’ In the past, sacrifice was assumed to mean the sacrifice of an other; now it commonly connotes self-sacrifice on behalf of those weaker and more vulnerable: the ones who in earlier times were the most prone to sacrificial victimization.

We don’t make choices based on individually-deduced facts, but rather on socially-shaped feelings. We are deeply shaped by the feelings we get when born into a culture with two thousand years of words and art baked in the narrative of an innocent man crucified by an angry mob—especially when the story is presented as the ordering principle of reality itself. These feelings led us to create hospitals imbued with this story. No longer would we only treat members of our own in-crowd; anyone would be treated regardless of who they were. It also led us to build homes for the orphaned, widowed, disabled, and disturbed rather than use them as easy fodder for sacrificial dominance.

The problem is that we allowed our persistent vanity of the autonomous self—a freedom ironically unleashed by the Word’s aesthetic defense of the individual person against the violence of collectivist groups—to hold back the power of this cultural process. We stubbornly believe that the Gospel of John is sharing another ideology: a set of facts that we can master and place in our pocket as we create communities the way we prefer. Yes, throw a little more love and mercy in, but retain a healthy dose of aggression or vengeance when necessary to maintain peace and unity within our groups. We’re ever-pricked by violence and social isolation, but intuitively create more clever ways to hide it from ourselves. Sacrifice used to be our pleasure; now it’s our guilty pleasure.

So as reflected in the modern western university, news media, and pop culture, we have become obsessed with words. Words have power; they are the symbolic vessels of cultural transmission. And whether we know it or not, the gospel marinade has softened our cultural heart to use language in such a way that no one is isolated because of an external difference: race, ethnicity, sexuality, gender, disability, orientation, income. Anyone can be anything, we say, lest we repeat the mistakes of our ancestors and see differences to the point that misfits and the weak are sacrificed for the sake of order.

This is why we’ve become a ‘safe space’ culture. We need ‘safe spaces’ to handle all the cognitive dissonance that cross-triggers in our hearts when we see victims through its light, yet refuse to renounce violence. We are waging war against words—symbolic transmitters—rather than confronting the full truth of our complicity with violence. We will destroy an elderly, white grandmother (an easy symbolic scapegoat for our ancestral sins of sacrificial lynchings) like Paula Deen on account of racial language used in private decades ago much faster than we will repudiate voting for bipartisan foreign policy interventions which cause generations of senseless suffering in the Middle East. We cannot truly look and see what we do because it would destroy the delicate artifice of modern sensitivity that we all pretend to endow. Instead, we go along with political plans to throw cash at mental health professionals to treat the military PTSD and suicide epidemics which are clearly caused by soldiers’ dissonance at being used as a sacrificial victims for the nation’s gloriously-typical imperial grandeur.

We cannot see the obvious violence of maintaining a Drug War which throws human beings into sacrificial cages in order to create ever-deflating catharsis for the rest of society. We cannot bother to see the insanity of sending armed men to force people to fix their tail lights, or carry auto insurance, or catch up on child support payments. So we make it all about racial or gender self-flagellation, where the focus becomes policing thoughts and words out of the hearts of men. Yes, hate is akin to murder, but unless we refuse to have agents carry out armed confrontations for victimless vices, we do a disservice to all victims: blue, black, and white.

We want our political leaders to use clean speech and sensitive words, and to sell us on their latest agendas for planning our lives with the careful use of sacrificial violence against nonviolent people here and abroad. We can’t let go of violence, so instead we sell it to ourselves under the banner of ‘protecting victims.’ Laws are now created out of a mixture guilt and envy: guilt for what we fear about ourselves in light of the Cross, and envy for the untouchable spotlight we perceive The Crucified One to have.

We want victim status so as to gain social currency in an order where victims (both real and perceived) jockey for footing atop a pyramid that is built on sacrificing (as victimizers) the least-convincing, self-identifying victims. That’s why the private tape of a public figure using the n-word engenders more visceral outrage and attention than the quiet, obfuscating schemes of state leaders using their offices to pillage earthquake-devastated Haitians for the benefit of their family members and friends. State plunder, with its sacred offices, is all too complicated to figure out and easily forgivable, so long as the takers have built enough social equity through victim-garbed state violence: a violence which comforts us with fleeting bits of sacrificial catharsis by scoring vengeance on the perceived beneficiaries of older sacrificial hierarchies. It’s what often fuels charges of privilege or hetero-normativity.

Whenever a tragedy happens, the ascendant knee-jerk fashion is to sacrifice maleness, whiteness, heterosexuality, monogamy, wealth, Christianity, or any marker of power vestiges in western culture that would ostensibly make one less likely to be marginalized or sacrificed: any aspect of our humanity that keeps us out of the scene of Göbekli Tepe, the 12,000 year old earliest known human structure believed to have been used for ritual sacrifice. What white privilege was there in the cold, crimson sacrificial basin of Göbekli Tepe? The only privilege in this universal primordial crime scene was that of a unified crowd compelled to cast its guilt on an innocent victim.

The Word shines a light in the darkness of our universal murders that we want to forget. It declares all of our victims—past, present, and future—innocent of the collective guilt we hurl onto them. It is finished.

We must let our speech to one another be leavened with humility and gratitude, not with lifeless, guilt-racked tolerance. We must take joy in our differences and use that energy to unite lives around the refusal of all collective aggression and vengeance.

In the end, the Word is a person we must be.