The Moral Case for a Free Economy 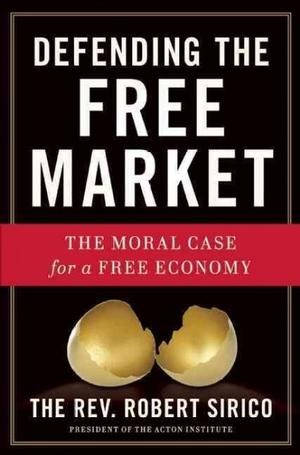 Critics of the free market assert that it fails the underprivileged, leads to income inequality, exploits the poor, and is at times downright cruel. They charge its defenders with being motivated by greed, selfishness, and materialism, and making a god out of efficiency. The solution to the alleged deficiencies of the free market and the character of its supporters is always without exception government intervention in the marketplace. But when that fails to remedy the perceived wrongs of the free market, then even more intervention is prescribed to make things right. And as Richman’s Law states, “No matter how much the government controls the economic system, any problem will be blamed on whatever small zone of freedom that remains.”

The Rev. Robert Sirico, in his book Defending the Free Market: The Moral Case for a Free Economy, argues that a free economy — where property rights, contracts, and the rule of law are respected; prices and interest rates are freely agreed to by willing parties; entrepreneurship is encouraged; profit is not disdained; and charity is voluntary — is the mTagsost efficient and moral way to meet society’s material needs.

Sirico is the co-founder and president of the Acton Institute for the Study of Religion and Liberty, headquartered in Grand Rapids, Michigan. He is also a Catholic priest who has lectured and published widely.

One of the strengths of Defending the Free Market is Sirico himself. As a “West Coast socialist” who once “slipped a joint of marijuana” into Jane Fonda’s hand, Sirico was active “in a panoply of radical causes” that Fonda and her former husband Tom Hayden supported. That is, until he found his way back to his Christian faith and learned to love liberty, limited government, and the free economy. Sirico credits the logic of what he was reading and learning “mostly from economists of the ‘Austrian school,’ men such as Ludwig von Mises and Friedrich Hayek,” for helping to eat away at his leftist assumptions.

After a brief introduction and a chapter detailing his political, economic, and spiritual journey, Sirico gives us eight chapters on various aspects of a free economy. Topics include property rights, free trade, freedom of contract, foreign aid, business regulations, unemployment, the labor market, profits, socialism, central planning, the price system, price controls, social justice, welfare, charity, health care, and the environment. He begins each of his chapters with a hypothetical question from a detractor of the free market that sets the stage for the topic under discussion. His answers always focus on the importance and morality of the free market and the folly and destructiveness of government intervention. I don’t find a single issue or problem for which Sirico suggests some form of government intervention. Each chapter concludes with suggestions for further reading, including works from authors such as Thomas Sowell, Hayek, Paul Heyne, John Lott, Mises, Charles Murray, and Julian Simon.

Defending the Free Market contains valuable insights and succinct explanations of economic truths, all without bombarding the reader with economic jargon. Here are a few quotations:

•  Lose your economic freedom and soon enough you will lose your other freedoms as well.

•  Trade is, at its root, simply an exchange between two parties who both stand to benefit.

•  In politics, the pie is fought over to determine who gets what portion of the pie; in the market, the pie can grow.

•  Ironically, a truly free labor market is the way to have less unemployment.

•  Many of the ills of globalization are the result of top-down planning rather than free markets.

•  The free economy is the enemy not of true equality, but of those bent on the acquisition of political and bureaucratic power.

•  In a free-market economy the most efficient way for those people [the greedy] to pursue their disproportionate love of wealth is generally to subordinate themselves to the service of others.

Echoing Mises, Sirico believes that economics at its most fundamental level “is not about money; it is about human action.” Perhaps that is why there is such an emphasis in Defending the Free Market on the importance of private property rights.

Sirico maintains that the right to property “is a basic human right.” People cannot be “secure in their human rights” without the right to property. Other human rights “tend to be eroded wherever property rights are violated.” Since “all property must be owned by someone,” it is better that property is controlled by individuals than by the state. “The best thing that politicians can do in regard to property is to enact and enforce just laws in accordance with natural law — to protect people from having their belongings unjustly confiscated.”

His emphasis on property rights underlies Sirico’s chapter on the environment. The root of many environmental problems is “ill-defined or poorly enforced property rights.” It is socialistic political orders “that fail to defend private property rights that are most inclined to abuse the earth.” Think China and the old Eastern Bloc countries. Sirico skewers the ideas that the U.S. Forest Service acts with the best interests of the environment in mind and that we should be overconcerned about the “threats” of overpopulation and resource depletion. He explains how the Endangered Species Act is an attack on private-property rights. He concludes that the “power of markets, ownership, and human creativity” better protects endangered species than “heavy-handed government regulation.”

Sirico tackles other current issues in much the same way, disdaining socialistic solutions and government interventions while emphasizing market solutions and the function of prices.

For example, on health care, Sirico makes it clear from the very beginning that “most of the problems in the American health care system stem from government intervention, not from market failure.” He maintains not only that the United States doesn’t have “a market-based health care system,” but also that “we haven’t had one for decades.” If government would just get out of the way, “we could have a health care system as innovative and efficient as the computer industry — with regular price cuts, instead of ever-rising costs.”

Moreover, we need to eliminate barriers to competition such as AMA limits on “the numbers of trained and licensed doctors,” regulations that “burden charitable providers to low-income people,” draconian FDA controls “on the development of new drugs,” and the plethora of laws forbidding “interstate insurance competition and requiring policyholders to pay for treatments that they never intend to use.” The market in health care is so dysfunctional because “there is a separation of the one who pays and the one who uses the services.” Government control over health “covers the entire health care system in the suffocating blanket of a soulless bureaucracy.”

Another area where Sirico shines is the subject of poverty. He makes the case that it is economic freedom, free markets, and business enterprise that help people rise out of poverty and that move countries from poverty to prosperity. Yet “bureaucratic regulation and a corrupt political culture make starting a legal business virtually impossible for people in many parts of the world.” And rather than help the poor in other countries, foreign aid from the United States just makes things worse. Sirico views religious charity as the solution of first resort to the problem of poverty. He explains that people of faith who fail to provide charitable assistance and address the root of poverty create “a vacuum into which the power of the state is drawn.” The displacement of charity by welfare has “actually perpetuated material poverty.” Sirico also exposes the real motive of proponents of social justice, destroys the “idol of equality,” and reveals the injustice of redistributing wealth to achieve some outcome.

In his defense of the free market, Sirico explains the beneficial nature of “creative destruction” and technological advancement, reminding us that “we should not let a false nostalgia blind us to the good of human progress.” Free-market capitalism isn’t fueled by greed; rather, “it is fueled by human creativity in a system that rewards people for serving the wants and needs of others.” The optimal breeding ground for greed and envy is “socialism in its various incarnations.” The relationship between employee and employer “is not one of exploitation, as Marx would have it, but of mutual benefit.” Sirico courageously defends “sweatshops” for “boosting the incomes of many poor people and putting their families on the first rung of the ladder of economic progress.” He does point out, though, that “the force that has created many of the most brutal sweatshops isn’t economic freedom but a mongrel cross of capitalism and government meddling.”

That brings up a theme that is found throughout the book: a recognition and rejection of crony capitalism. Sirico exposes “corporate-government cronyism masquerading as a free market.” Another theme that is nice to see but also surprising is the anti-capitalist bias of many clergy and religious people. Sirico laments that they often view profits with disdain, are especially vulnerable to the prejudice against business, view competition as essentially immoral, and “simply do not have the faintest notion of the vital role of ethical business enterprise and entrepreneurial creativity for a flourishing economy that can lift people out of poverty.”

Although Sirico is a priest and his book refers to the pope and the church, Defending the Free Market is not a religious book or even a book geared toward religious people. As is to be expected, he mentions and promotes the work of the Acton Institute throughout the book, but such references are not forced. Defending the Free Market is an acutely personal, positive, and spirited defense of the morality of the free market and a free economy. It deserves a wide readership.

This article was originally published in the August 2013 edition of Future of Freedom.