Can Conservatives Be Libertarians? 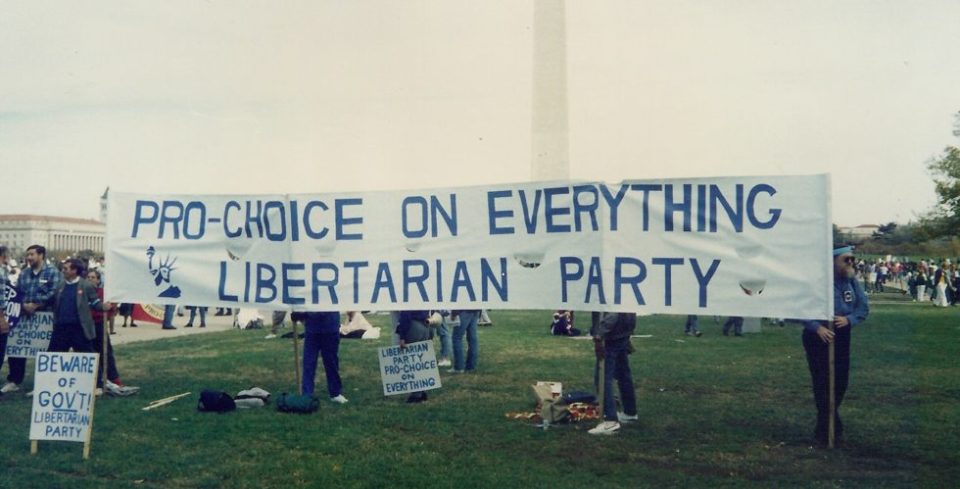 Some libertarians are applauding the recent Supreme Court decisions relating to same-sex marriage, not because of anything to do with the Constitution, limited government, federalism, individual liberty, the proper role of government, or separating marriage from the state, but because they just happen to like the idea of same-sex marriage. As I have argued elsewhere, they are entitled to their opinion, but there is no libertarian “position” on same-sex marriage.

On Tuesday, March 26, the Supreme Court heard oral arguments for and against California’s Proposition 8, a ballot initiative passed in 2008 that eliminated the right of same-sex couples to marry that the California Supreme Court had recognized.

On Wednesday, March 27, the Supreme Court heard oral arguments on the merits and demerits of the Defense of Marriage Act (DOMA), federal legislation passed in 1996 that defined marriage as only “a legal union between one man and one woman as husband and wife” and that permits states to refuse to recognize same-sex marriages performed in other states.

On June 26, 2013, the Supreme Court ruled that the section of DOMA that defined marriage (sec. 3) was unconstitutional, thus ending the ban on same-sex married couples being recognized as married and eligible to receive federal benefits. The Court also let stand a 2010 federal district court ruling that declared Proposition 8 to be unconstitutional.

Conservatives who believe in traditional marriage and consider the term “same-sex marriage” to be an oxymoron are disturbed by the Supreme Court’s rulings. This is not generally because they find fault with any legal or constitutional arguments, but because the Court did not, in their eyes, rule in favor of traditional marriage—legal and constitutional arguments be damned.

But conservatives are also disturbed by what they see as libertarian support for same-sex marriage. This is not generally because they find fault with any arguments about individual liberty and the proper role of government, but because libertarians are not, in their eyes, upholding traditional marriage—philosophical arguments be damned. 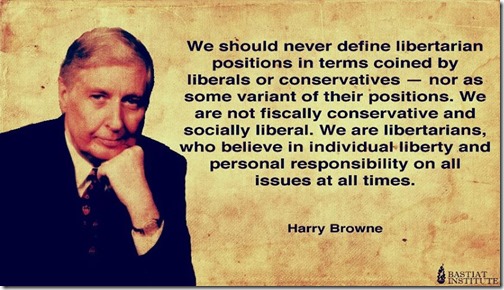 The issue of same-sex marriage is one of three, the other two being abortion and drug legalization, that I believe keeps some conservatives from becoming libertarians.

When I say conservatives, I don’t mean political conservatives who blindly follow Ann Coulter, Rush Limbaugh, Sean Hannity, Bill O’Reilly, and Mark Levin, and watch Fox News. The only limited government they want is a government limited to one controlled by conservatives in the Republican Party.

When I say conservatives, I do mean social conservatives, many of whom are religious, mainly nominally Christian, but also theological conservatives. Their feelings about homosexuality, abortion, and drug use range from disapproval to disgust. They may “lean libertarian” on economic issues, have a healthy skepticism of the political process, loathe the size and scope of the federal government, and even espouse a noninterventionist foreign policy, or at least a healthy Buchanan-esque reserved foreign policy. They are good candidates for libertarians, and would be more interested in libertarianism were it not for some libertarians equating the agitation for same-sex marriage as a battle for human rights, terming abortion a woman’s right to choose or expelling a trespasser or parasite, and/or and extolling the joys of the recreational use of marijuana.

When I say libertarians, I mean those who believe that a free, just, and peaceful society is grounded in the nonaggression principle—that it is always wrong to threaten or employ violence against someone except in defense of one’s person or property. And it is just as wrong for the government to do it, and even worse, considering its vast resources and the incredible damage it can do. Libertarianism is a political philosophy that is concerned with the proper use of force. The only proper role of coercion or violence is to defend person and property against coercion or violence. These should not be used against anyone who has not himself deprived someone of life, liberty, or property. This does not mean that coercion or violence should actually be employed, just that it might rightly be. Coercion or violence that goes beyond just defense is unjust aggression. Peaceful and consensual activity should never be aggressed against. But, of course, this doesn’t mean that all such activity is moral, wholesome, and beneficial.

Although some conservatives have mischaracterized libertarianism as depreciating tradition, rejecting religion, and disdaining morality, nothing could be further from the truth. I believe it is entirely possible to be a resolute social and theological conservative and at the same time be an uncompromising and hardcore libertarian.

Conservatives can and should be libertarians because there is nothing inherently libertarian about same-sex marriage, legalized abortion, or recreational drug use.

Same-sex marriage is now legal in California, Connecticut, Delaware, Iowa, Maine, Maryland, Massachusetts, Minnesota, New Hampshire, New York, Rhode Island, Vermont, Washington, and the District of Columbia. Section 2 of DOMA, which was not ruled unconstitutional by the Supreme Court (although I believe it eventually will be), allows the 37 other states to refuse to recognize same-sex marriages performed in these 13 states (and Washington D.C.). However, since the federal government now recognizes same-sex marriages performed in these states, it is only just a matter of time before Uncle Sam sticks his nose further into the institution of marriage and imposes uniformity on the entire country.

But even if every state in the union legalized same-sex marriage, that still wouldn’t make it a marriage. Fulton J. Sheen, the Catholic television preacher of the 1950s, although not talking about marriage, said something profound that illustrates perfectly what I am saying: “I am free to draw a triangle if I give it three sides, but not, in a stroke of broad-mindedness, fifty-seven sides.” You are free to call your cat a dog, but that doesn’t mean you have the right to enter your cat in dog shows.

Marriage has always been and will forever be the union of a man and a woman—anything else is just cohabitation and fornication.

But as a libertarian, I never make unqualified, ambiguous statements like “I support same-sex marriage.” That could mean just about anything:

Same-sex couples are free to get “married” and call their relationship a “marriage,” just like they are free to call red green, a circle a square, and chocolate vanilla. They just shouldn’t expect the rest of us, and the government, to follow suit.

Should the Supreme Court have ruled section 3 of DOMA unconstitutional? I could argue both ways. One thing is for sure: there should be no federal tax, health, retirement, marriage, or nonmarriage benefits for anyone to sue over. And not only should the federal government get out of marriage, it should also get out of everything else. State and local governments should get out of marriage as well.

Social conservatives are particularly concerned about abortion. But so are many libertarians—as I believe they should be. They are just not as vocal as “pro-choice” libertarians.

I have argued here that because the non-aggression axiom is central to libertarianism, and because force is justified only in self-defense, and because it is wrong to threaten or initiate violence against a person or his property, and because killing is the ultimate form of aggression that, to be consistent, libertarians should be opposed to abortion. The fact that some of them are not is irrelevant to the question of whether conservatives can be libertarians.

Why should it be considered libertarian to kill a baby in the womb or unlibertarian to oppose such killing? There is nothing libertarian about a woman choosing to kill her unborn child for getting in the way of her lifestyle.

I don’t know of any social conservatives who use illicit psychoactive drugs or recommend that anyone else do so, at least they don’t make it public. Many religious social conservatives not only don’t use illegal drugs, they also abstain from or limit their use of alcohol. That is my choice; that is their choice. But none of this has anything to do with anyone else being freely and lawfully able to use or abuse whatever drugs—legal or otherwise—they choose.

The libertarian approach to drug use is a simple one: there isn’t one. If you don’t choose to cook meth, smoke marijuana, snort cocaine, or shoot up with heroin for moral, ethical, religious, health, safety, or any other reason then fine—Just Say No. But if you do choose to partake, then you are responsible for your actions while you are stoned, and your ambulance, hospital, and doctor bills if you overdose. To be a libertarian, there is no requirement that you use drugs or change your opinion about them or those who use them.

The libertarian approach to the morality of drug use is another simple one: legal doesn’t necessarily mean moral. One may think that the recreational use of drugs is the most immoral thing anyone could possibly do, but that would still be no reason to look to the government to ban drugs. Furthermore, why should anyone’s opinions about drug use be based on anything the government says? Today the federal government says that this drug is legal and this one is not, but tomorrow it may say just the opposite. And if you want to talk about morality, how can anyone with any sense of morality support the government arresting someone, seizing his property, ruining him financially, destroying his family, and locking him up in a cage for manufacturing or possessing certain quantities of a plant the government doesn’t approve of?

Some libertarians share in the blame for this particular conservative aversion to libertarianism because of how they are so quick to call any Hollywood leftist a libertarian who calls for drug or marijuana legalization even though he may be just a dope-smoking statist.

I have written much on the evils of the drug war. See my book The War on Drugs Is a War on Freedom, and especially this essay titled “Should Christians Support the War on Drugs?”

Originally published on LewRockwell.com on July 24, 2013.