Idols of the Heart: Baptizing the War Prayer 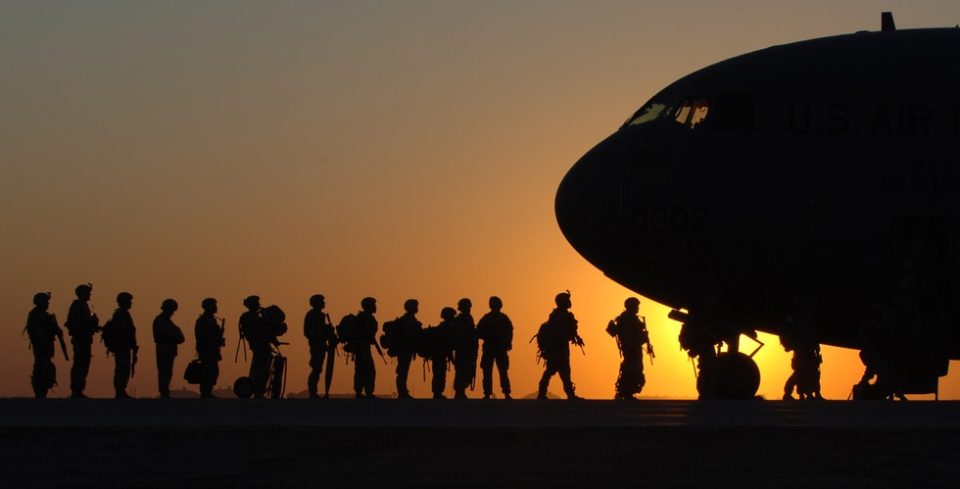 Since the bombs began to fall on Baghdad in March of 2003, churches, Christian leaders, religious organizations, and individual Christians have been telling us to pray for U.S. soldiers fighting in Iraq. We have been told to pray for the safety of U.S. troops while they defend our freedoms, protect us from another terrorist attack, rid the world of weapons of mass destruction, bring to justice the perpetrators of the 9/11 attacks, fight the global war on terrorism, liberate the Iraqi people, spread democracy, fight “over there” so we don’t have to fight “over here,” protect American interests in the Middle East, ensure the security of Israel, and make the world a better place.

There are several problems with these war prayers.

First, our “enemies” are praying the same war prayers. The citizens of other countries likewise ask God to bless and protect their troops. How is the Lord going to take care of both sides in the same way? American Christians just assume that God will not bless and protect the troops on the other side. American troops alone are dear to the heart of God.

Second, why is it that war prayers never seek to limit war? In his “Prayer before Battle” from “Some New Prayers” (CWE, 69:137), Erasmus gives us a model:

Almighty king of Sabaoth, that is, of armies, you determine both war and peace for the regions of the earth by means of your angels appointed for the task. You gave new heart and strength to the boy David, so that although he was small, without weapons, and unskilled in war he attacked and overthrew the giant Goliath with a sling.

If we are fighting for a just cause, if we are forced to fight, I pray you, first, to turn the hearts of our enemies to the desire for peace, so that no Christian blood may be spilt upon the earth; or to spread the fear that men call panic; or to let victory be gained with the least shedding of blood and the smallest loss by those whose cause is more pleasing to you, so that the war may be quickly concluded and we may sing songs of triumph with one accord to you, who reign in all and above all. Amen.

Fourth, war prayers are vague and presumptuous. What exactly does it mean when we are told to pray for the troops? Is it their safety and protection we are supposed to pray for? Should we pray that God keep them safe while they fly their helicopter gunships, pilot their bombers, and drive their tanks? This sounds like a strange thing to request since U.S. troops are the ones that did the invading of a sovereign country. Should we pray that God protect them while they drop bombs, throw grenades, launch missiles, fire mortars, and shoot bullets?

Fifth, and most significantly, war prayers are dishonest. Although not usually vocalized, implicit in every war prayer is a request for victory. It doesn’t matter what country U.S. troops are fighting in or the reason they are fighting. A war prayer for God to protect the troops is not just a prayer for the troops to be kept safe for some indefinite period; it is a prayer for the troops to be kept safe while they are vanquishing whatever group of people the U.S. government claims is the enemy. If war prayers were honest prayers they would openly and boldly call upon God to help U.S. forces crush the enemies of the United States.

Mark Twain (1835-1910) recognized the true nature of war prayers a hundred years ago. In his brief story called “The War Prayer,” Twain tells of a church service held on the Sunday before “the battalions would leave for the front.” A “war chapter” was read from the Old Testament, followed by a long prayer from the pastor that God would protect the “noble young soldiers,” encourage them “in their patriotic work,” and “bear them in His mighty hand.” At the end of the prayer a mysterious stranger appears and addresses the congregation. He claims to be from the throne of God.

After explaining that he was “commissioned of God” to put into words the other part of the pastor’s prayer that he and the congregation prayed in their hearts, the stranger uttered a real war prayer:

O Lord our Father, our young patriots, idols of our hearts, go forth to battle – be Thou near them! With them – in spirit – we also go forth from the sweet peace of our beloved firesides to smite the foe.

O Lord our God, help us to tear their soldiers to bloody shreds with our shells; help us to cover their smiling fields with the pale forms of their patriot dead; help us to drown the thunder of the guns with the shrieks of their wounded, writhing in pain; help us to lay waste their humble homes with a hurricane of fire; help us to wring the hearts of their unoffending widows with unavailing grief; help us to turn them out roofless with their little children to wander unfriended the wastes of their desolated land in rags and hunger and thirst, sports of the sun flames of summer and the icy winds of winter, broken in spirit, worn with travail, imploring Thee for the refuge of the grave and denied it – for our sakes who adore

Thee, Lord, blast their hopes, blight their lives, protract their bitter pilgrimage, make heavy their steps, water their way with their tears, stain the white snow with the blood of their wounded feet! We ask it, in the spirit of love, of Him Who is the Source of Love, and Who is ever-faithful refuge and friend of all that are sore beset and seek His aid with humble and contrite hearts. Amen.

Although Twain dictated “The War Prayer” around 1904-1905, it was not published until 1923 in Albert Bigelow’s anthology of Paine’s writings called Europe and Elsewhere (Harper & Brothers, pp. 394-398). Twain is supposed to have remarked to a friend that only the dead were permitted to tell the truth.

But Mark Twain was not the only one to shed light on the true nature of war prayers. Back in 1845, the American Peace Society assembled a collection of sixty-four essays by a variety of authors and from a wide range of viewpoints on the subjects of war and peace.

It is titled The Book of Peace: A Collection of Essays on War and Peace. Essay No. XLI is called “War-Prayers.” After pointing out that pagans have their war prayers, and explaining how “our prayers, if made in accordance with the pacific principles of the gospel, would oppose war, and be discarded by all war-makers as hostile to their designs,” the author puts forth a war prayer that honest chaplains should pray on the eve of battle:

O Lord of hosts, smile upon thy servants now marshaled before thee for the work of death. Breathe into them, O God of war, the spirit of their profession. Let them for the time forget thy prohibition of old, thou shalt not kill, and also those commands of thy gospel which bid them do good unto all men, to love even their enemies and turn the other cheek to the smiter.

Thou knowest, Omniscient Father of all, this is no time for the application of such principles; and we pray thee to animate them with sentiments more appropriate to the awful duties of this hour, and thus prepare them for a signal and glorious triumph over their enemies. Fill them with the spirit of war, and enable them, in humble reliance on thee, to shoot, and stab, and trample down their foes. Nerve every arm, direct every blow; guide every sword, every bayonet, every bullet to the seat of life, that we may soon reap a glorious harvest of death.

Thou knowest, O God most holy, that our enemies, murderers in heart, if not in deed, all deserve the damnation of hell; and we beseech thee to aid us in sending as many of them as possible to the place “where the worn dieth not, and the fire is not quenched.” Fight thou for us, and give thy servants a great victory, for which all the people shall praise thee.

And back in 1793, Anna Barbauld expressed her opposition to war in Sins of Government, Sins of Nations. She includes in her work this brutally honest caustic prayer:

God of Love, father of all families of the earth, we are going to tear in pieces our brethren of mankind, but our strength is not equal to our fury, we beseech thee to assist us in the work of slaughter. Whatever mischief we do, we shall do it in thy name; we hope, therefore, thou wilt protect us in it.

O Lord God of war, we beseech thee to bless our troops in their latest military adventure. Go with U.S. soldiers as they travel around the globe to intervene in the affairs of other countries. Use the U.S. military to smite the enemies of the United States just like thou used the children of Israel in the Old Testament to smite the heathen nations.

We ask for thy special protection on the U.S. soldiers who have invaded Iraq and Afghanistan and now occupy those countries. Guide every bomb to its target, and every bullet to the heart of its victim. We pray that thou would send these Muslims to hell who dare to plant roadside bombs to harm U.S. soldiers. We know that thou will look after widows and orphans – so please help our soldiers, thy soldiers, to create as many widows and orphans as possible.

Destroy the young Iraqi and Afghan children with bullets, malnutrition, or disease before they grow up and become suicide bombers. We beseech thee to guide all Predator drones to their targets in Pakistan and all the other countries where terrorists and their families need to be killed. Fill U.S. soldiers, thy servants, with the spirit of indifference to the death and destruction that they are causing. Avenge the United States, thy country, for the 9/11 terrorist attacks.

We also humbly request that thou move upon Congress to not only increase funding for this war, but the overall military budget as well so thy people can fight another just war against the Muslim infidel. All these things we ask in the name of the Prince of Peace.

We know, of course, that no war prayers like this will ever be prayed in public. No matter where or why U.S. troops are fighting, we will still simply be told to pray for the troops. But has anyone ever stopped to consider what the Lord thinks about these war prayers?

Originally posted on LewRockwell.com on January 17, 2012.

Did you like Idols of the Heart: Baptizing the War Prayer?
You may also like These Posts: