This article is #21 – and the final article – of a weekly series highlighting the former memes of Bureaucrash, an organization once headed by my friends Pete Eyre and Jason Talley of the Motorhome Diaries. The memes were originally authored by Pete Eyre and Anja Hartleb-Parson, and were intended as means of communicating ideas about liberty in catchy and succinct ways. 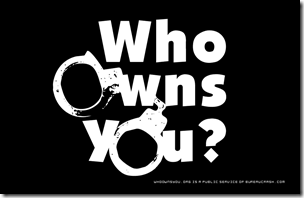 The government and special interest groups working through the government claim they are “here to help” you. But no matter how good their intentions, usually they end up violating your rights. For instance, most people would agree that substance abuse is bad, whether that substance is heroin or over the counter sleeping pills. Most people would also agree that the doctor, the lawyer, the nutritionist, the hairdresser and the contractor you do business with should know what they are doing. Yet, the essence of natural rights is that self-ownership and freedom of association are not contingent upon man-made legislation but are inherent in each individual. The real question then, is not whether substance abuse is bad, or whether it is good for a person to have the proper training in their chosen profession, but if anyone should be able to tell you what you can or cannot consume, inhale, drink, inject into yourself, or with whom you can contract. The answer is NO — you are the only one who has the right to make this decision. Any coercion exerted by the government violates your individual rights, grossly misallocates economic resources, and distorts the market. It’s a simple yet powerful concept: you own yourself.

Restrictions or bans on substances violate property rights. In many countries, governments (or as some have called them, “food Nazis”) have taken to banning all sorts of items, such as trans-fats, foie gras, and the smoking of cigarettes — a clear violation of property rights. If a restaurant owner believed her patrons would prefer foods without trans-fats, she would be smart to prepare foods without those fats. A bar owner who sees that many customers would rather have an adult beverage without smelling of smoke would ask his patrons not to light up. But, even if the property owner made a decision that others disagree with, or one that goes against market trends, that is his prerogative. Consumers are always free to spend their dollars elsewhere.

Restrictions or bans on substances are inefficient and impossible to enforce. The war on (some) drugs is a war that cannot be won. After a group of people (i.e. the Drug Enforcement Administration, legislators trying to appear “tough on crime,” etc.) deem a particular substance “illicit,” money is taken from productive members of society to fund what is now a $40 billion per year anti-drug campaign. With 25% of those in state prisons and 55% of those in federal prison incarcerated for a drug-related offense, this failed government policy means the U.S. has the highest incarceration rate in the world and the largest number of individuals behind bars in absolute numbers. Not exactly the “land of the free.” Further, making substances illegal does not lessen demand for them but only moves them to the black market where purity is questionable, where contractual disputes are resolved through violence rather than in court, and where the price is artificially high. This allows organized crime to thrive and pushes desperate users into crime to pay for their addiction.

Occupational licensing violates your right to voluntarily make contacts. It is no secret that those who oversee licensing requirements have an incentive to limit their competition. By buddying up with legislators to create and score the tests required for a license to “legally” work in their profession, plumbers, hairstylists, contractors, doctors and others claim to act to “protect” the public from shoddy workmanship or services. This serves only to protect them from competition, which drives up prices for the consumer. By denying consumers the right to hire who they want for a particular job it violates their right to voluntarily reach a contact with another person. And it violates the rights of an individual to choose their profession. If the free market forces of competition were allowed into these professions, it would drive down cost and raise quality because those who do a bad job or defraud people will be exposed for doing so, and cannot hide behind a government-issued license.

The regulation of pharmaceuticals violates individual rights and distorts the market. The Food and Drug Administration, another agency created under the auspices of “protecting us,” is responsible for countless deaths due to the barriers (in terms of time and money) it puts between a drug and the market. In a true free market, consumers would have the right to buy and consume drugs at their discretion. For determining the safety and efficacy of a drug, they will likely turn to their doctors, Consumer Reports-type associations that rank drugs, and other reviews for advice. And if a drug fails to deliver on its promises it will gain a negative reputation and will be avoided, possibly causing the manufacturer to go under. This is your life, not some bureaucrat’s.